Return of the Pink Bumpers

It's like red but not quite ... what's turning finish pink near cabinet door bumpers? An unsolved mystery. June 30, 2009

Question
More pieces have emerged with the pink discoloration (see pictures below). We still have no idea what is causing this - it seems to be either something off-gassing from the bumpers (the circle in the picture is where the rubber bumper was attached) or some kind of vapor interaction with them. Problem seems to occur after at least three months in the field. Has anyone seen this problem before or have any idea what is going on? It would be great if we had some kind of a lead to follow on this. 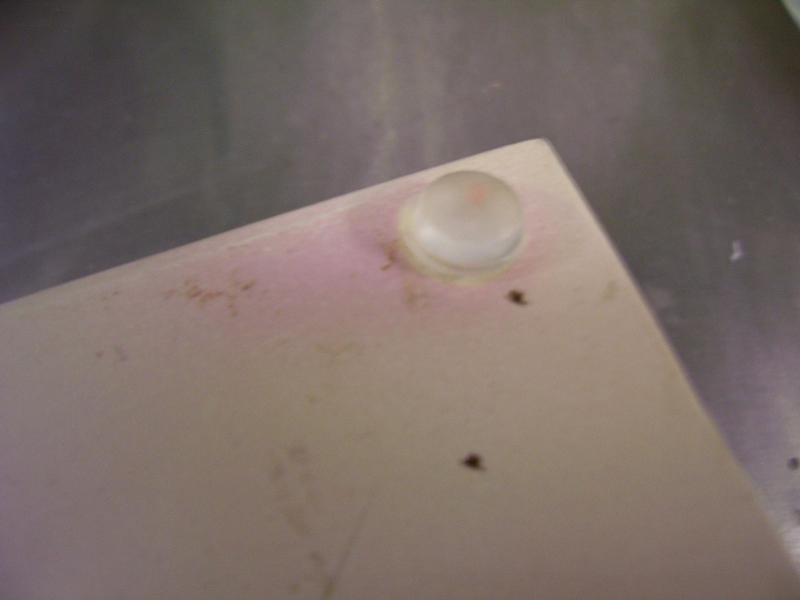 Forum Responses
(Finishing Forum)
From contributor G:
Are you sure your catalyst percentages are correct for your finishes? Usually clear turning pink is an over catalyst indication. Are these the same bumpers as before? Sounds like you should replace all the bumpers you have purchase from that company before more pink shows up. Start making test pieces and put bumpers all over them. Wait the time it takes. Do different product coats and isolate which one affect the finish. It'll take time.


From contributor S:
This looks like over catalyzation to me (Bloom) pinkish sometimes can be blue to orange hue as well. The reason why it appears more visible around the bumpers is because the coating tends to build heavier towards the edges of the door.

From contributor D:
I wonder if maybe the bumpers are getting put on too soon and trapping something (gas) under there?

From contributor L:
What was the finish tinted with? I can see the plasticizer in the rubber stop leeching into the coating and causing universal tint to bleed out.

From the original questioner:
Over-catalyzation does not appear to be the problem. We have found no differences in catalyst level between pink areas and control areas on the door. According to the formulation, silica is the only pigment present in the topcoat and sealer.

From contributor E:
This problem seems difficult to pinpoint on one primary origin. Usually it is a result of too much acid in the catalyst, too much catalyst, or a combination of the two and analysis for this condition is hard to achieve. Another issue is why does it occur mainly on pieces not exposed to natural light (backs of doors, area of frames overlapped by doors)?

I have exposed affected doors to sunlight and the pink discoloration goes away and doesn't re-appear. In addition, if it is a catalyst issue, why doesn't it occur with every piece from that day's run? I also question what was stored in the cabinets of the affected pieces. For example, if hydrochloric acid in a plastic container is stored with metal cans in a closed cabinet, rust forms on the cans due to the acid-gas vapors that leech through/out of the plastic container.