Here's the story of an old, legacy grinding wheel and the difficulties a woodworker encountered while trying to make it work again. January 2, 2012

Question
I have an old motorized water cooled rotating sharpening stone. It has an angled tool rest for plane iron sharpening. The stone is 8 1/2 " in diameter and is 2 1/8" thick. (It is like an antique foot operated farmer's ax sharpener). It has been sitting for years but I just replaced the motor and started to use this. I sharpened some chisels, one was 1 1/2" and the stone cut fairly aggressively.

Before sharpening a plane iron I thought I would flatten the surface by pressing a DMT diamond sharpener against the face of the rotating wet stone. After I did this, the wet stone will hardly cut! I used a dressing wheel that I have for my regular bench grinders, but it didn't seem to help. What can I do to revive this great old tool?

Forum Responses
(Architectural Woodworking Forum)
From contributor J:
My guess is that you clogged the stone with diamond particles - probably going to be tough to remove. If I were in your position, I'd look for a new stone, or get some heavy scrap steel and see if I could wear down the stone until it got past the diamond loaded portion. When my grinding wheel gets out of whack, I've just taken some heavy scrap steel stock and grind it in a way to remove the highs from the stone until it's straight.


From the original questioner:
Contributor J's response made sense, but instead of using a chunk of steel, I worked on the wheel with my Sears dressing wheel. Then I did try to sharpen an old plane iron really bearing down. But it didn't really seem to do much even though I was more aggressive then on my earlier attempts.

Then I looked on-line about dressing sticks, and realized that I had two (8 inches long, 3/4 inches across, made by Carborundum Corp). I didn't know what they were. I really applied a dressing stick with force as the grinding stone turned. It did help some. Then I thought to try it again, without water on the grind stone. But while the grinding stone works better than it did, it still is not very aggressive. As the grinding stone turns against a chisel face, the grinding effect is not continuous. Some spots on the stone face clearly do most of the cutting. Does anyone else have some ideas to help me get the entire grind stone surface to be good and gritty?


From contributor M:
Is it a horizontal stone, or a vertical stone? If horizontal, could you flip it? I use loose 36 grit silica carbide to flatten my 200 grit wet stone, but if you're sharpening with the wheel edge, then this probably doesn't help.

From the original questioner:
Unfortunately, my stone is in a vertical orientation. I am grinding on the narrow face of the stone, just as on an old farmer's grind stone. I did go back and apply the dressing stick, without any real improvement. Then I really aggressively applied the dressing wheel (metal handle with a row of rotating disks). That seems to have left a series of tracks in the form of little pits so clearly that tool attacked the surface, but the grinding abilities of the stone are still spotty and inconstant across the face and around the circumference. In the course of refurbishing this machine, I replaced the 1/4HP motor with a used, but much newer one. I am now thinking I have put too much time into a lost cause.

From contributor B:
Did you know that the diamond particles are embedded in nickel on your DMT stone? There is a simple rule most machinists can tell about grinding nickel - don't. The nickel is now thoroughly impregnated in your grinding wheel. The stone is now clogged causing it to bump and burn. The more you try to dress the wheel, the further the nickel is driven into the stone. Sorry but you've probably wrecked the wheel.

From the original questioner:
Part of what has made this problem so frustrating is not being able to understand what had gone wrong and why the face of the stone wouldn't clean up. I only work with wood and have no metal working background, so I would never have figured this out.

From contributor B:
A machinist could probably reface your grinding wheel on a lathe using a diamond probe. Of course you'll need to weigh that to the cost of a new wheel. I think a water wheel stone is a great tool and maybe worth your trouble. 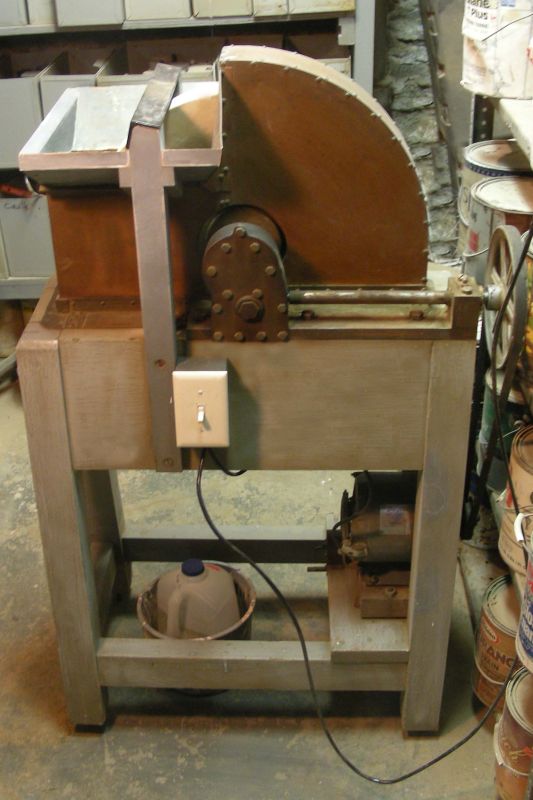 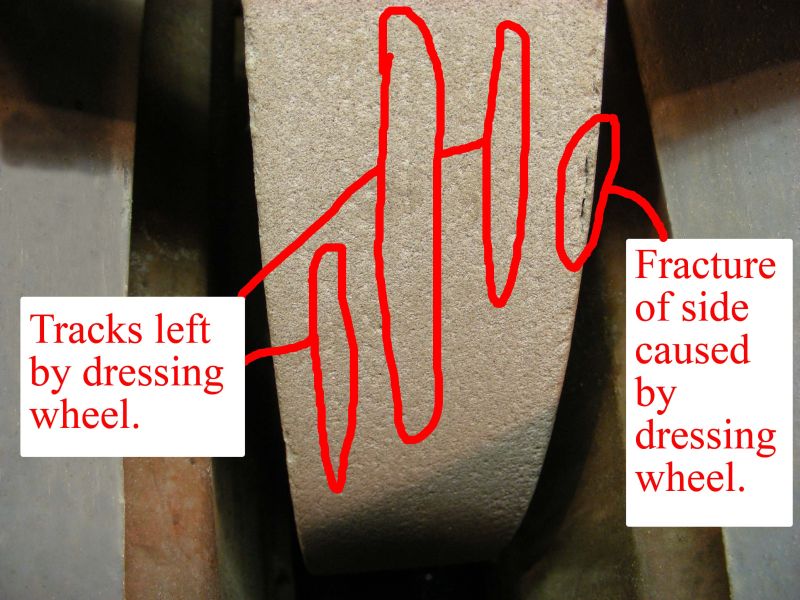 
From contributor B:
8.5" in diameter? Looks bigger from where I sit. Whatever size it is, this looks like a great old home-made machine. I think I would find a way to redress the wheel. From what I've read about these softer kinds of water stones, redressing them is something that needs to be done anyway from time to time. I think you can buy optional attachments to do this or as I've said, find a machinist. After looking this up, I was really surprised at just how much a new 10" wheel costs!

From the original questioner:
Contributor J – you are correct the stone is 17 inches in diameter. My brain skipped. This is a homemade machine as well. My grandfather made this in the 1930’s. He said the wheel was in fact an actual farmer's grind stone. Being the depression era, I think he got an old motor when he made this, and so the motor may have been 100 years old when it smoked last week. Thankfully, I had a spare motor of the same hp rating, and the same mounting centers. Per your suggestion, I have contacted a local machinist and asked him to give me an estimate on refacing my stone.