The lower stump and root of a big walnut tree can yield beautiful figured wood, but the work is a huge hassle. January 27, 2008

Question
I had a large black walnut tree cut down the other day to make way for a new building. I've had it milled and the lumber is now drying. Someone told me that I ought to dig out the root and have it sawed. It's about 3 foot in diameter. Would it be worth it to rent a backhoe and dig it out? How far down would I be looking at digging? Is it cut across or with the grain?

Forum Responses
(Sawing and Drying Forum)
From contributor D:
With the grain, it is all going in different directions, but from top to bottom would be a better way of putting it. I have done it. Man, what a lot of chainsaw sharpening/ruined bandsaw blades. There are ingrown rocks in those dudes. I can cut a nail and keep sawing, but a chunk of quartz stops me dead. A 3 foot butt is going to be a monster stump (4000 lbs of wood and mud). If you are paying to have it sawn, expect to invest some money. They are very labor intense. Do everyone a favor - soak it in a pond or something for a couple weeks first to help clean it up. And pressure wash like crazy. They can make some nice gunstock material, but like I said, a good deal of work. 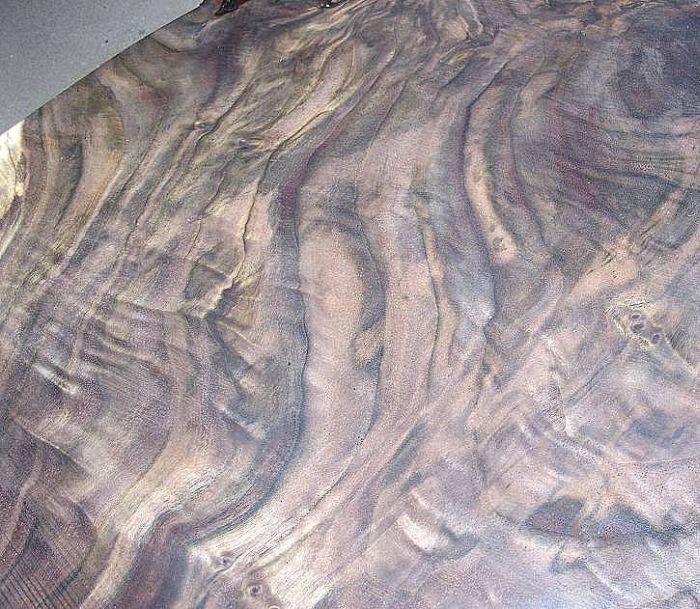 
From contributor J:
That is good advice. I have sawed walnut stumps, including messing with some roots. Rocks and dirt are real issues, but the grain in the resulting wood can be very attractive. It is worth the effort if you can work efficiently.

From contributor B:
I don't know where you are from, but I've been told by two different people here about selling the stump. One of them owns a sawmill and saws full time. He said someone came out and paid for the stump, dug it up, and leveled the ground. I would check around if I was you.

From contributor A:
Did that once - never again. Work, work, work and very little better than average wood out of it. Contributor D is right - I smoked so many chainsaw chains, and several band blades, spent a lot of time cleaning and pressure washing it, then it still didn't fit through the mill correctly - spent lots of time trimming roots to get it through the mill. Darn hard to even get up to the mill with the loader bucket, since it was a mess of roots and pockets, then once on the mill it wouldn't turn easily like a nice cylindrical log. I have heard that claro walnut is the species that most often has great looking wood in it - the one I cut was black walnut. Like I said, I'm not inclined to mess with another.

From contributor K:
I have done it also, and as stated above, once is enough. Three feet in diameter is too small for any worthwhile end product when you weigh that against dull blades, ruined chainsaw bar, digging equipment rental. The best figure is on the top of the big lateral roots where it is making the turn from flat to vertical.

When the little sapling started growing, those roots were running along just underground to the small stem, and turned straight up. Since then, each time the cells divide, because of the diameter of the stem getting larger, and the roots getting larger, the cells are getting crowded down their length, by the shortening of a decreasing radius through that turn. This causes a lot of grain deviation. Thus, the larger the tree gets, the more figuring there will be.

If you want to see what to expect, you can take a hammer and knock some of the bark off by striking it with a 45ş > glancing blow. It may take a few hits to get an opening, but when you hit a couple of inches over from the edge, the cambium will shear right off if you hit toward the opening. Sometimes I just score the bark with the chainsaw to make it easier to get started.

There is nothing down in the taproot or the root-ball worth going after. Even though there may be some wonderful wood in the nice sweeping arc of the root, you need to think about how you plan to use this wood after you have it. If you plan to use it for something like furniture legs, it is not easy to plan something that fits that curve just right, and then because of the figure, there may be too much grain run-out causing it to be weak.


From contributor B:
I think that part of it depends upon what kind of minerals are in your soil. I went to Ceres, CA and spent two days slabbing about 8 stumps for a fellow. The resulting slabs were absolutely beautiful. Yes, some of the grain was not as nice as one would like, and the color was good, but on those which had excellent grain, we picked up good color due to the mineralization. Considering what the guy ended up with, I should have charged him more.

From the original questioner:
I'd either have to hire someone to come dig it out, or drive about 30 miles to rent a backhoe. I have a good relationship with my sawyer and hate to bring him something that's going to ruin a bunch of his blades. And I already got some pretty nicely figured wood out of the trunk. Given all that and your opinions, I think that I'll leave it in the ground.

From contributor B:
I failed to mention that I used a chainsaw to make the slabs after I refused to do it with a mill. Even then the other fellow got in lots of practice sharpening chains, but then he needed the practice anyway.

From contributor N:
I know that the Missouri gun stock factories used to buy the roots when I was in my native Kansas. Reinhard Fajens and Bishops come to mind. I have no idea if they are still around.

From contributor W:
I was lucky to get what I think is a root ball like this, but it was sitting out in a field burned and had been there for an unknown number of years. No bark, visible roots or dirt on the thing. I've been very fortunate, and have hit no rocks, glass, or steel and the wood is probably the loveliest walnut I've ever seen. There doesn't seem to be any grain, but I'm cutting it for bowls, so grain direction is not critical. I'd haul it out, douse with kerosene, burn for a week, then wait for 5-10 years and see what you get.