Question
I'm looking for recommendations for putting a clutch on a mill with a 10 hp electric motor. Anybody gone through the process?

Forum Responses
(Sawing and Drying Forum)
From contributor K:
I've got an electric Wood-Mizer and they use a mount under the electric motor that simply goes slack when you pull on a lever, releasing tension on the drive belt, and tightening it when you pull on it, so the motor is always idling when on. Very simple - same system they use for their gas motors. They do have a special spider that has three fingers around the electric motor drive pulley that keeps the belt off the pulley when the tension is off. You may want to look at someone's. Otherwise they use an electric clutch system similar to ones used on lawnmower decks. You could possibly get one from a lawnmower junkyard.


From contributor A:
On the LT70 we use, the motor is always engaged to the drive belt. You just kill the power to the motor when you want the blade to stop.

From contributor M:
Contributor A, in that setup, is there a brake to stop the blade?

From the original questioner:
Thanks for the input. My interest in doing this is to deal with three issues.

First, everyone talks about the reduction in blade life due to metal fatigue and without a clutch, the blade is obviously making a lot of unnecessary revolutions.

Second (maybe my setup is unusual in this), each time I shut off the mill and the (10 hp single ph) motor slows down, I get a severe shudder in the mill. I have talked to a Baldor tech who says this is due to rpm change when the centrifugal switch reengages the starter capacitor circuit and is normal and unavoidable. With the drive belts disconnected this is minimal, but due to all the mass and inertia of the wheels, it becomes amplified. Despite the fact that the tech says it's normal, I have to believe it is hard on the mill bearings, blades, etc.

The third and less critical issue it the additional electricity used in starting the mill, though I know this does not add up to a major amount of money. Any thoughts?


From contributor R:
I had a 10 hp single ph Baldor motor on a sawmill and I just turned off the motor when I wanted it to stop. The shudder seemed to me like an electric brake and the motor didn't freewheel, which made the blade stop moving in a short time.

From contributor A:
No, contributor M, there is not. It does not make very many turns after you kill the power.


From contributor E:
If you put a DPDT switch (or a DPDT contactor) in series with the motor as an on/off switch and wire the motor wires to the common (normally center) of the switch, the power wires to one side of the switch and put a jumper on the other side of the switch, you will effectively short the motor leads together when you turn the power off and this will provide an old fashioned but useful brake circuit for the motor. Not the best, but a quick and easy try to see if it reduces your shudder. If you are not sure what I am saying, find someone local and show it to them before you wire it up. Be sure the switch or contactor has a high enough current rating for the motor or it will not last very long and could be dangerous.

Thanks contributor A - I was just curious. Yes, killing the blade rotation will increase blade life.


From contributor R:
I used a 50 amp breaker on my mill for my on and off switch. I don't know if that makes a difference or not. Here is a picture of how mine was set up. 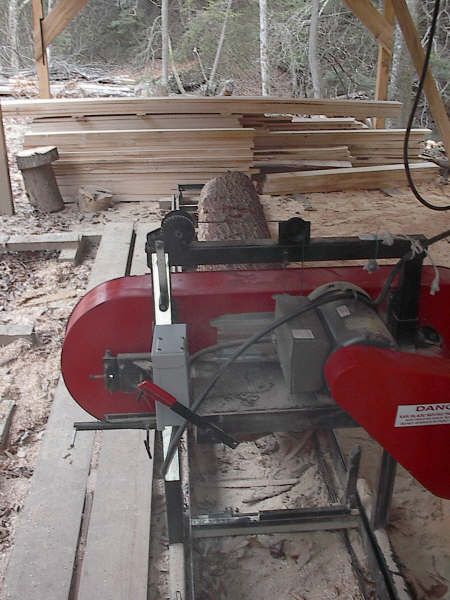 
From the original questioner:
Thanks. So you don't have a clutch on yours either, eh? What is the red handled lever in the picture?

From contributor R:
The red handle is to engage the belt to the motor, but I never used it because with the motor running at full speed the belt would squeal plus the motor stopped the blade in less than 5 seconds, while if you disengage the belt, the bandwheel would coast and it takes a lot longer for the blade to stop. It just seemed easier to flip the switch than use the lever.

All the years I had my mill I didn't break many blades and I didn't have any problem with the motor. The only time I'd turn off the motor was when I was flipping the log for another cut, which I'd say is 3 or 4 times a log. I could see the lights dim in my house though, when I'd turn on the motor. I didn't cut that much wood in a year. I'd guess about 10,000 board feet a year. I'd average about 500 board feet in 4 hours on average by myself.


From contributor G:
I made my own mill using a 20HP Honda. I recently added a centrifugal clutch on it. When engine speed drops below 1700RPM, the blade stops (very positive, no slippage). Should work on an electric setup.