Screw Through a Water Pipe: Whose Fault?

It's a typical snafu: the cabinet installer hits a water pipe with a screw. This thread is a collection of examples, with descriptions of who covered the repair cost. August 16, 2012

Question
Our employee was working in a penthouse putting up paneling. He used his stud sensor looking for a stud and found what he thought was a stud but instead screwed through a PVC pipe for sprinklers. Within minutes the water pressure had built up and blew a hole through the drywall and of course water went where water goes. My guess is it's next to impossible to get a mechanical plan to know where these things are, so who is responsible for the water damage? My company, the developer, and the contractor all knew where we were putting up our panels. Does anybody know about this sort of thing?

Forum Responses
(Business and Management Forum)
From contributor G:
The guy putting the screw through it is, and if he is an employee then they are. That is what insurance is for.


From contributor A:
Contributor G is correct in all regards. These things happen and that is specifically the reason why you need to carry insurance.

From contributor P:
I remember one of my guys put a screw through a 110 line into the monitor line on a mainframe/mini type computer and it fried the mainframe motherboard, big bucks. The computer line was not shielded nor was the 110 line. Insurance is a beautiful thing.

From contributor G:
It should be the plumber’s fault. How dare he put the PVC pipe behind the wall where no one can see it? It should be front and center for all the world to see, but it also does depend on a few circumstances. Where was he screwing? Where was the pipe in relation to the depth of the studding? Should there have been a plate in front of the pipe? How long a screw was used?

The plumbers did some new water lines but they cut a stud and ran the pipe in line with the stud and it was still there on the top half. This was 57" off the floor and there was no metal in front. I don't use them but a stud finder will indicate on a pipe as well. The home owners were out of state talk about panic, I found the water turn off and shut the water heater off in the breaker box and called the owners to get the plumber of choice back out. That's when I saw what had been done, each one of us would have done the same if we did not have X-ray vision.

The plumbers had the nerve to charge $390 to come out and cut the drywall out and replace the section I screwed. I told the plumbers office to send me the bill no questions asked I owned it. I then called my own drywall man to repair and re-texture the area and I repainted it as soon as it was dry enough. I had the cabinet re-installed in two days and the job went on schedule.

The homeowner was still out of town called and asked if he should get the drywall man out and I told him I took care of it and all was in and done. When the owner returned he realized what had happened and how I would have had no way to prevent this. He paid the plumbers bill and refused to allow me to pay. He felt it was not my fault in fact he was happy there was no water damage on the new hardwood floors or elsewhere and ended up giving me an extra $250 on my next draw as what he called a gratuity. Check with the local codes usually the first 2 1/2" must be free of wires and plumbing.


From contributor N:
The one stud you absolutely have to screw into is always covered in old non-code wiring and has plumbing, and/or gas lines nearby. Give your insurance agent a call and make this right.

From contributor J:
I was installing some cabinets against a wall with steel studs and I drove a screw in and the condo went black. I hit the main 220 line coming in to the condo and called electrician and had it repaired. The electrician told me the guy who originally wired the place did it wrong and that he ran the wires on the inside of the stud channel instead of the outside. He also had the wires bundled tight with zip ties so the BX couldn’t flex and move as the screw tried to hit it. I paid the bill, even though there was no way for me to have avoided this. It cost me $300 for the electrician and he was able to make the repair so all drywall was no disturbed behind the cabinet.

From contributor M:
I was screwing into 5/8" sheetrock with a two inch screw and hit a waterline, (unshielded and tight to back of sheetrock) in a vacation home. The homeowner was acting as a GC. Nobody inspected the plumbing/electrical prior to sheetrock. I found the shut off, cleaned the mess, and opened the wall. I called the owner (who came and repaired the plumbing himself) and I repaired the sheetrock and finished the install. The customer blamed the plumber, his friend. There was no insurance involvement, and no extra charges. I’m still doing work for this customer four years later. As a matter of fact, I rank him as my number two client -lemonade from lemons.

From the original questioner:
I do have insurance, and it’s been a dozen years since I thought about it so I can't remember how much. We were lucky, the water showed itself right away. Let’s say it happened at the end of the day just before a long weekend. A new building and no one living several floors below, the damage could have been in the millions.

Now I live in the real world, so I know it would take a month of investigation and thousands of dollars to contact all of the contractors involved with putting things behind the drywall, and if they did have drawings they are as drawn, not as built.


From contributor U:
I was installing shutters in a customer’s window and ran a screw into the side jam of the window and had water start seeping out around my screw. I could not believe they had installed a plumbing line next to a window. I got the homeowner to contact the contractor's super so we could shut off the water and he said there was no plumbing in that location. Seems like the masonry walls were full of water from rain storms during construction, as I had this happen in another window as well. What a relief to me, but I cannot imagine what else is going on with the house if their walls held water for months after moving in. This was a seven million dollar house, but very poorly built.

From contributor Y:
While installing a metal balustrade, I ran a screw into a radiant floor heating line. Talk about a mess of glycol spewing out! That being said, I knew about the lines (I always ask or check) and was told where they supposedly were and given the parameters of how far away from the balcony line I could screw. Needless to say, I was shocked when a fountain of green began coming out. It turns out the heating guy ignored the specifications he was given and ran the lines close to the balcony, right where the balustrade went. The homeowner/GC, who normally is very difficult on the carpenters and cabinet makers, apologized to me and made the heat contractor handle all related repairs.

From contributor O:
Here is the last one I hit. I was running through a stud with no metal shield. It was not fun, but I paid for it myself. The homeowner was at work and never knew that it happened. 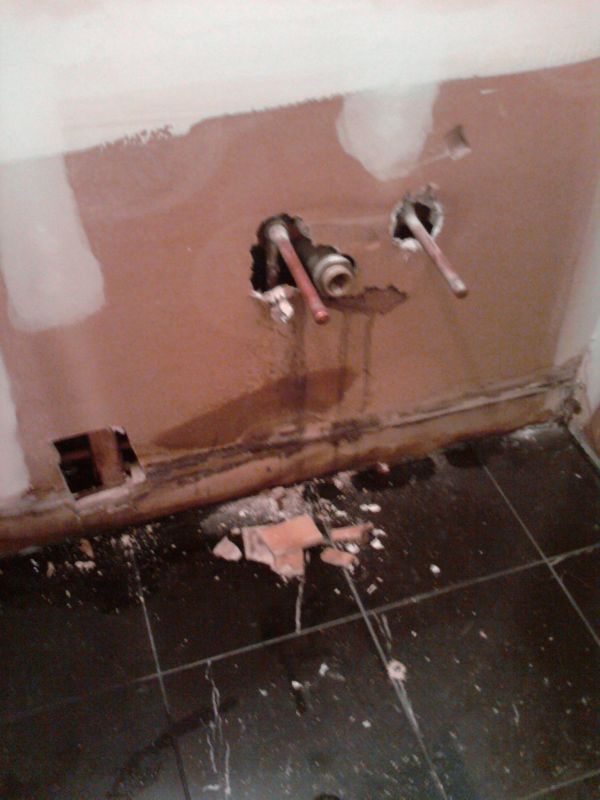 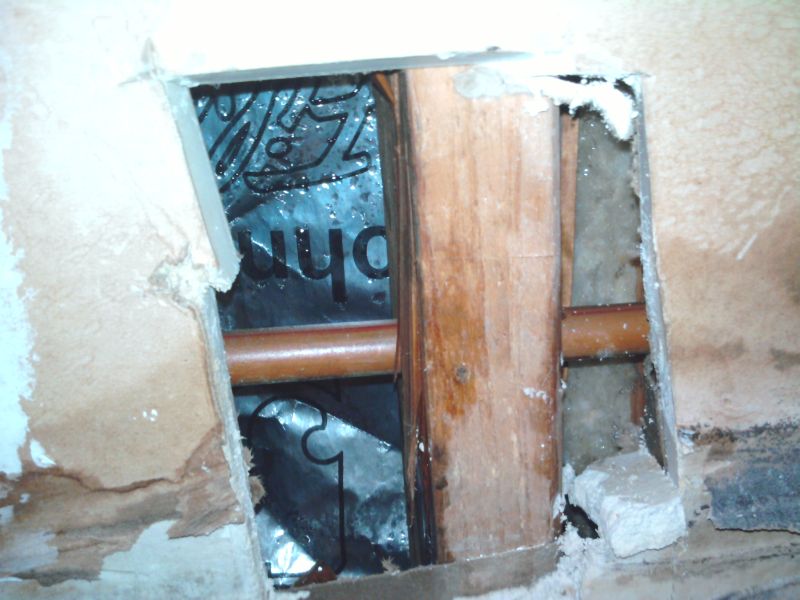 
From contributor M:
Tips for avoiding this type of mishap: keep screws to 1" penetration of stud, max. Use a multi-purpose stud finder and then recheck by hand tapping with a hammer and nail before putting cabinets over a wall. Keep a dimension list of studs found, and refer to it as you install each screw. Do not only check vertically, but horizontally as well. Visit the site before sheet rock is installed, take pictures if possible of exposed conditions. Have a good insurance policy. Assume every screw or nail will hit something it should not hit. Pre-determine shut off locations. Do not rush your installation. Be proactive. Have the best customer relations, and notify everyone asap. Do not be too proud to admit something you tried to avoid.

From contributor C:
Tips to avoid problems: pre-determine the path of the wiring and plumbing before putting anything through the wall. I've never punctured a line or a wire partially because I do this, partially because I've been lucky. If I'm not sure where things are at, I drill a few inspection holes to find everything. One time I came within inches of an 80 amp feed line. So like I said, part of it is just luck.

From contributor L:
I was hanging an upper in a commercial job and drove my screw and instantly heard a hissing, then was blasted in the face with a stream of boiling hot water. I staggered around, half blind, to shut off the water. I'd hit the pipe a foot away from the in ceiling hot water tank. The plumber, many years earlier, didn't follow the rules. I called a plumber, had it fixed and gave the bill to the client/landlord, with a statement from the plumber explaining the rule that was not followed. He paid.

Inexperienced guys think screw size matters. If I see one of my guys with a 3" screw in their hands I ask them what they're using it for and tell that story. 1" is a good rule, but if you look at a #8 screw the point runs for 5/8" before you are at the full gauge. So if your cabinet has a 1/2" back, then 1/2" to 5/8" GWB, (plaster and lathe is a different story) your stud is an inch in. Therefore a 1 3/4" to 2" screw gets you all the shear strength you're going to get.