Advice on table leg joinery that will tolerate movement in the slab table top. January 24, 2010

Question
I am a recent graduate of Fine and Creative Woodworking at Rockingham Community College in Reidsville NC, and am producing a walnut slab table/desk for a client. I am preparing to attach the leg assembly to the slab, and am trying to determine what type of allowance on the joining points for the slab movement. The slab is 88" long, 2" thick and varies from 33" to 55" wide. In looking at a Dimensional Changes chart in an article from an old issue of Fine Woodworking by Tom Liebl, I see that a 12" slab of walnut dried to 7% will move .23". I assume that is a 4/4 bd.

Am I right in assuming that a 2" thick board will move about 1/2 as much due to the increased thickness? This logic tells me that I should leave around 3/8" on the front of the slab, and 1/2" on the rear. I am planning to use dowels to attach the legs to the slab, and screws for the front leg bracket.

I've uploaded a jpeg from my SketchUp design to illustrate what the table looks like. Any help would be much appreciated! 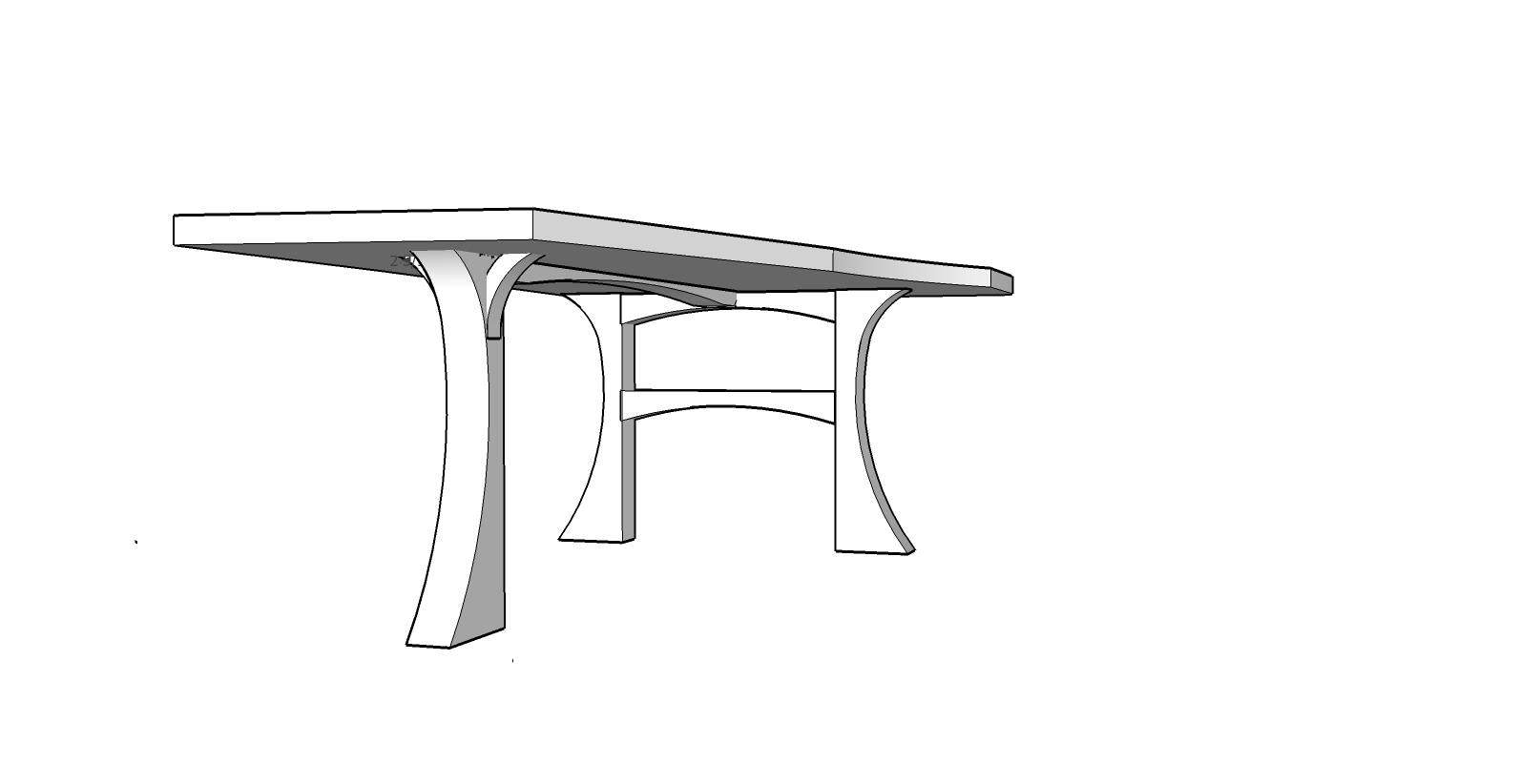 Forum Responses
(Furniture Making Forum)
From contributor J:
I can't quite follow your logic. For a given change in MC, a width of a thick slab will change just as much as a thin one. The thin one will change faster, but not further. Seasonal movement across the 55" dimension should probably be around 3/8", assuming you use some sort of film finish. Your 1/2" allowance there would be plenty.

Note that the various members will get wider and narrower, but they won't get significantly longer or shorter. Your only movement challenge is where the slab meets the pair of legs shown towards the rear of the picture. That two leg assembly is going to stay essentially the same width, but the slab isn't. If you connect those back legs to the slab with dowels then the slab will push the rear leg assembly apart next summer. On the narrower end of the slab, where you've only got one leg, you can do whatever you want because the contact area between the slab and the leg is very small, and also because the slab and leg will move together anyhow.


From contributor C:
Use the Wood Shrinkage Calculator here on WOODWEB. The link is below. Your school has a great rep. I usually see student's work at the Carolinas Industrial Woodworking Expo.


From the original questioner:
Thanks guys. I'm thinking I may use screws through the back leg assembly with a larger hole (3/8") in the leg to allow for movement. Any other comments or suggestions are welcome!

From contributor R:
I would probably mortise and tennon the legs and brackets. Run the width of the tennon on the single leg parallel to the grain of the top and shrinkage will not be an issue, nor will dowels or screws in the centerline be a problem and will serve to register or keep the slab centered. Mortise and tennons in the brackets at the single leg and the tennons on the ends of the pair of legs on the other end would be perpendicular to the grain. Just cut the mortises plenty long in these locations so the tennons won't bind in the slots as the flanks move. This isn't rocket science, just give them plenty of room.

I like the design, however if you terminate the curve of the legs to a feather edge as shown in the drawing you will live to regret it. If the short grain doesn't start breaking off in the shop it surely will after delivery to the customer.


From contributor K:
I agree that the feet need to chamfer back. If the slab top is two parts glued together in the middle, I like to use either a T slot or dovetail on the cross brace, let into the top, which allows it to move, while keeping it flat. If it moves, then there may be cup if the rings have short arcs, which this will control also. While I like the look, I would also beef up the longitudinal stretcher or brace. I don't think you have enough strength down the length of the table for getting bumped on the ends. If you want to keep it looking thin, just give it more height on the single leg.

From the original questioner:
Thanks for the suggestions re the chamfer on the feet. I think that is very good advice.

From contributor F:
I may be too late, but you will want to make your stretcher between your trestle and single leg deeper to keep your desk from wobbling. That top is heavy and the legs are a long lever arm working the stretcher joints. Nice looking.