Softening Veneer for Wrapping Over a Bullnose Edge

Advice on how to persuade an expensive veneer to wrap around a tight curve without splitting. January 25, 2010

Question
I have a project where I need to wrap quarter-slice sapele (ribbon-mahogany) over the front edge of a counter top. The substrate is Extira and is 1.5" thick. I milled a bull-nose profile on the front by routing it with a 3/4" roundover bit on both top and bottom. The resulting profile is a 1.5" semi-circle. The grain runs with the edge of the counter, as the veneer definitely bends this way the best.

During a trial dry run of a small sample, the veneer readily cracked along the grain. I fully expected this, being quarter-sliced. So, to prevent splitting I added gum tape to the show face. Now I can bend it without the veneer cracking and splitting. The small sample could be formed around the 1.5" diameter without problem.

Now, the actual counter is almost 4' wide. The piece of veneer that bends is also almost 48". During a dry run it seemed that it would be ok, but I really would like if the veneer were a bit more flexible. The entire show face has 2" wide gum tape applied to keep existing joints together, and prevent new splits.

Or, am I just being paranoid after spending days assembling the decorative veneer pattern that is part of this counter? Also, will the sapele wrap around fine? Note that the pattern does not wrap around the bull-nose. The pattern is up on the flat area, and about 8" away from the curved edge.

Forum Responses
(Veneer Forum)
From contributor V:
I did a very similar project with zebrano a few years ago. My grain was running perpendicular to the grain however, like you are thinking, I sprayed it with GF-20, but I let it just about completely dry before I applied a PVA and used an iron to adhere the veneer to the table edge. It worked great. You should have no trouble. Instead of spraying the veneer softener, wet a rag and wipe the veneer.


From contributor C:
You could moisten the veneer or the tape lightly to make it more flexible and that will help. How are you holding it down? In a vacuum bag I assume. Are you using a caul of some sort over the veneer to keep it flat? I have also been able to use strips of 2" wide 60 day blue tape instead of the gum tape to hold the veneer together while bending, just be sure to burnish it in well with a brass brush. It is certainly easier to cleanup than gum tape. You can see a project I just finished using both blue and gum tapes in the Project Gallery.


From the original questioner:
I like the wet rag idea. Thanks.

Contributor C - I have a 5x10 flip-top table. There will be a caul involved and the brass brush is great. I have had blue tape on veneer go through the vacuum press (while drying veneer), and have had a very hard time getting it off. On purpose, it was only on a scrap area. The adhesive soaked into the veneer.


From contributor C:
I have a flip top as well and am curious how you are getting the bag to wrap around the bullnose? Also, be sure to use the 60 day blue tape, not the 14 day. I use the 60 day regularly in a heated press with no problems, it peels off easily. Home Depot sells it with an orange inside label. The 14 day however always causes some tearout when being removed.

From the original questioner:
My experimental method had mixed results. Spraying the glue side of the veneer with distilled water did make the veneer more flexible. However, the blue tape on top of the gum tape, stretched as well as I could manage, did not provide sufficient force to make a viable nosing. After glue-up, there were voids underneath the sapele on the bull-nose edge. So, I sliced off the front edge, including an inch of substrate, and am adding a more conventional mahogany nosing. A top and bottom pass with a lipping planer, and a couple of passes with a router, and I will have the bull nose profile back.

I am not overly surprised by this, since 2090 blue tape has a fair amount of stretch. However, I did use 3" blue tape successfully as a "hinge" on the back edge of the counter substrate to perfectly align the pattern. And, "pulling" the veneer over the front edge helped to keep that alignment from shifting. So, that was a major success. By the way, I did not see any blue tape that said "60 day" on it. I did see a "delicate" tape. Do you happen to have the part number handy?


From contributor C:
Glad to hear you had some success. I thought you mentioned you were using a caul on the nosing area? That should have helped even out the pressure. I have had good luck with layers of 1/8" neoprene used as a caul to even out the pressure, it also helps backup the veneer so it is less likely to fracture while bending.

I had one other process that worked well last time I used it but might not have worked for you. I made a two ply of my face veneer and a backer veneer pressed flat and glued with Unibond. While the Unibond was partly cured (flexible but not hard) I wrapped the two ply over the edge and glued it down in the press with the neoprene cauls. The two ply process helped bridge any gaps and was moist and flexible. It was a nerve wracking process though, a bit late on getting it wrapped and you have a nice hard flat panel with not bullnose. The blue tape I use I think is #2080, I will check and let you know if it is different. The interior cardboard wrapper is orange. Post a picture when you have this done, I’d love to see the rest of the panel.


From the original questioner:
I found the #2080 tape. Thanks. More experiments will be needed to get the "wrapping" correct. However, I do know how to add a solid nosing without much trouble at all. So, the project was still a success. 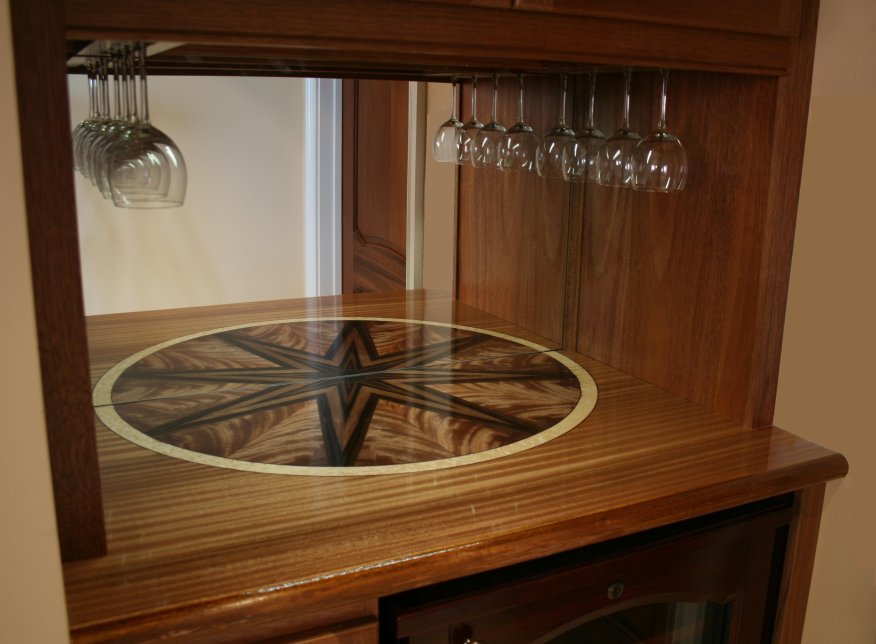 
From contributor C:
A picture makes it so much easier to understand what you were doing. Looks very nice and the edging fits the design well. I can't really see the bullnose but I get the idea. Another option might be to veneer the panel without the bullnose and veneer the bullnose by itself then glue them together taking care to line up the top edge to minimize sanding.