A question about how to get rid of a bad batch of spalted Maple leads to a nice discussion of different ways to spalt wood, with photos. April 15, 2012

Question
I tried to spalt some soft maple by dead stacking and waiting half a year. Well, it looks like crap. I kiln dried it and planed it. Not black line, but it's all smudged. It was a decent amount of wood, 150 bd ft, and now it's taking up room in my shop. I was thinking of selling cheap for paint grade stuff, but worried that the mold might cause a problem for a customer and will be worse than burning it. Anyone know if it can be primed and painted fine?

Forum Responses
(Sawing and Drying Forum)
From Professor Gene Wengert, forum technical advisor:
There are different types of decay or rot fungi that get into wood. It is the white rot fungus that creates the desired patterns of spalting. Did you keep the wood wet and only allow a very small amount of drying? Did you use any spawn to initiate the white rot fungi?

All fungi in wood have a risk of creating an allergic reaction when someone sands the wood. I am not aware of any problems when painting the wood.


From contributor T:
Most spalting I've heard of and done is in log form, then sawn and stickered, not dead stacked after cutting. This mold/fungi, in my opinion, could be more dangerous to the health due to the way it grew. I'm guessing this was a velvety type growth due to the dead/flat stacking and probably has a musty odor.

The fungi I've got happening in log form has a half umbrella type growth. This type gives it the marbly look and as Gene mentioned, is a stage of rot. I've got a few logs that were standing dead to start with and they may end up too soft for use. I have a few that were cut green and stored on the edge of the wood line for 1-1/2 years to keep damp that I've recently set on a wagon frame to dry and prepare to cut.

Gene, you mention spawn. If what one wants is not oyster mushrooms, where would you get it? I have an insufficiently spalted maple log lying in wettish woods, with the slabs in tree order.

From contributor J:
Thanks, Gene, I've got a bunch of shitake-inoculated logs, and they produce regular crops over the years, but I was wondering if anyone knew what fungus one desires for optimum spalting.

From Professor Gene Wengert, forum technical advisor:
It is my guess that any white rot will work okay.

From contributor T:
Just leave the log in the shaded woods near the ground where it can stay semi-damp and it will happen on its own.

From Professor Gene Wengert, forum technical advisor:
The problem with letting Nature do this is that we may not get a white rot fungus, in which case we will have results like the original posting describes.

From the original questioner:
Have you had good success with letting them sit out? I don't seem to get them to do much, but maybe they are too dry by the time I get them, as the tree companies let them sit around for awhile. How long do you leave them out, and do they touch the ground?

From contributor X:
My spalt pile is a patch of native grass that I allowed to grow up years ago. It stays shaded for all but about 30 minutes a day by a tree and that's only in the winter when the sun has a lower arc. I will make the logs a thick bed of leaves and pine needles and sawdust and top that with some of my wife's garden compost. She doesn't know, so keep quiet. I've only had a few failures using this method.

I have dead-stacked lumber using one contributor's method of malt liquor (I think he uses Colt 45) then board, malt, board, malt, etc., then tarp it. Have done this three times thus far and had two good results with sycamore and one bomb with flame box elder.

So dead-stacking can work. The first round of sycamore I let go too long and lost some of the lumber, but over half was still useable. You got to keep a close watch on it. I'm not going to try the FBE again - that was a total disaster. I just have to let them do their thing naturally. The good news is I find them standing dead routinely since they die young, and usually get from a fair amount to sometimes an entire log of excellent spalted lumber.

FBE is the only maple I have experience with spalting and it's a whole other critter compared to hard maple, so I can't help you on specifics on hard maple. Sycamore is also soft like FBE and I'm guessing denser species are more difficult to promote spalt in, but really couldn't say for sure.

I found a spalted black walnut log. I thought that BW could not spalt in the heartwood, but I assure you it can - because I found one.


From contributor A:
You may have a spalted red elm. They look a lot alike, but I have never seen the heartwood of black walnut spalt and trust me, I have tried.

From contributor X:
I know the difference between a red gum and a black walnut, brother.

From contributor T:
Here's my result. These two logs laid on the ground (I hear that might not be good, direct ground contact) on the edge of the woodline and let the grass grow up around to hold moisture. These were cut green and are approximately 1 1/2 years old of spalting. I put them on the wagon to transport and ran out of time to get up the hill to the mill due to the excessive storm damage and cleanup. 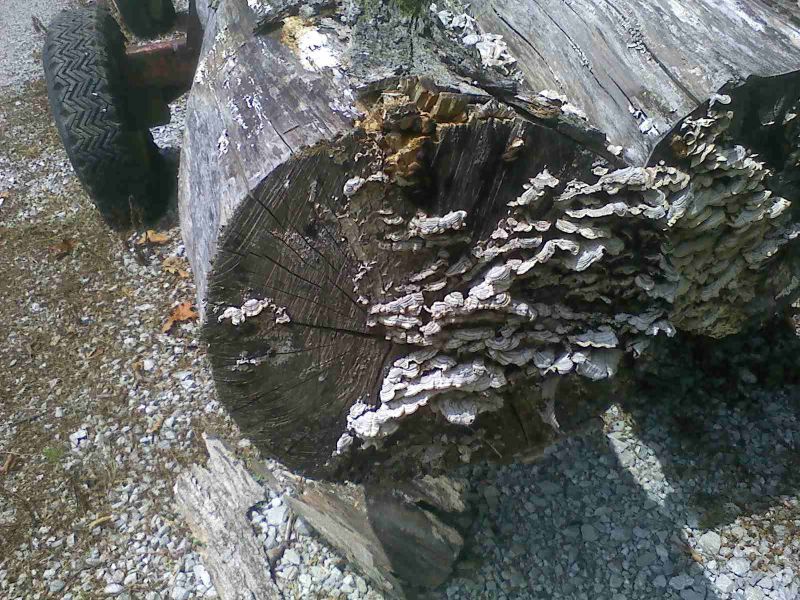 
From contributor B:
I read a paper online from the U of Mass about spalting. It stated that spalting is a 3 fungi process; the first is one that merely discolors the wood; the second one can only enter after the first, as it feeds on the residues of the first, and tends to start degrading the wood; the third, known as white wood rot to us laymen, then enters and pretty much destroys the wood. The black lines one sees in wood are due to a layer of defense laid down by the first fungus in its attempt to stop the second, as they don't get along. All of this takes some time, more so in some woods than others, so it may be that you need to give it some time to work. While I cannot personally testify to the accuracy of these statements, they do make sense as compared to the woods I have cut.

From contributor T:
This was a standing dead maple tree that I cut down and let spalt. I noticed the black lines didn't penetrate as deep and I'm assuming due to the drier wood not having the moisture to feed the first stage of fungi deeper into the wood. It does have pretty patterns and discoloring.

I theorize a green log would allow the fungi to spread deep into the log due to the moisture and food source. 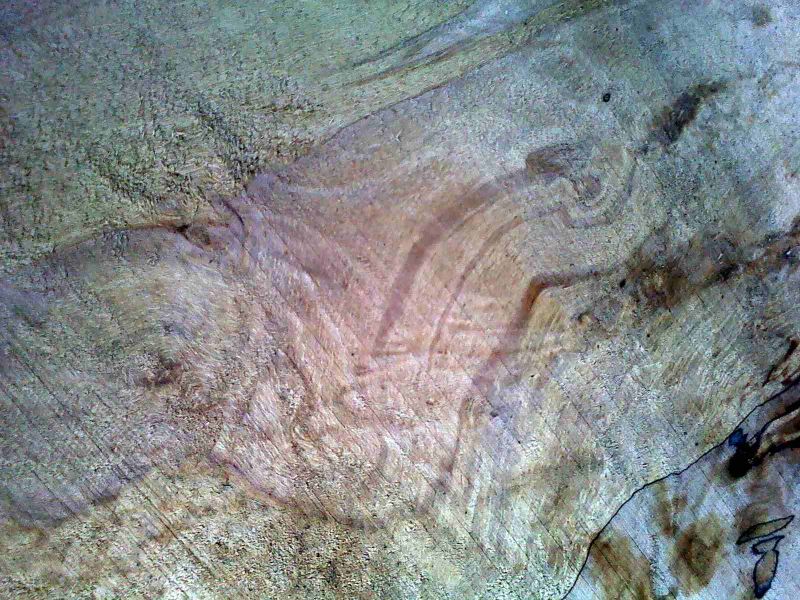 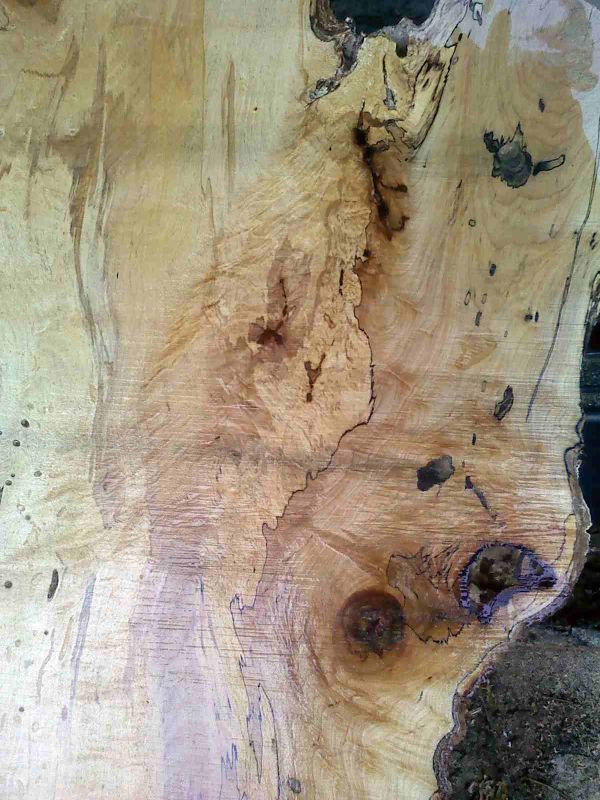 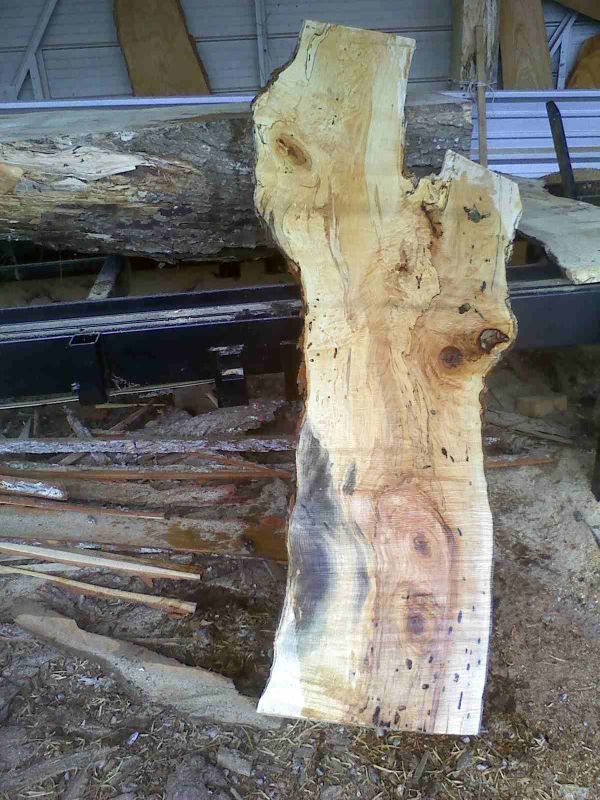