Question
We need a cup gun for spraying 2-part finishes on table tops and want the best atomization possible. We have a Kremlin 10:14 AAA and love its atomization (when properly adjusted) and need the same quality on the cup gun.

Forum Responses
(Finishing Forum)
From contributor C:
A standard spray gun will do about the best there... Iwata makes some very nice ones, also Sata. They are expensive, though, and you will get a lot more overspray, which has its own issues quality-wise as well as in operator comfort considerations. LVLP or HVLP from Iwata or Sata might get you where you want to go, but you'll really pay for them; they start at about $600.00 and range up quite a ways from there. I have not splurged enough to test them yet, so I can't really say they will do it. I love my Accuspray, but it is not the equal of the Kremlin AAA units for atomization. My Iwata Eclipse will do it, but is a bit slow for table tops.


From Paul Snyder, forum technical advisor:
I use the Kremlin to spray almost everything. That way, there's no loss of quality, speed, or transfer efficiency. With small quantities of catalyzed finishes, I use the gravity cup attachment with the pump. With the gravity cup, there's very little waste involved. 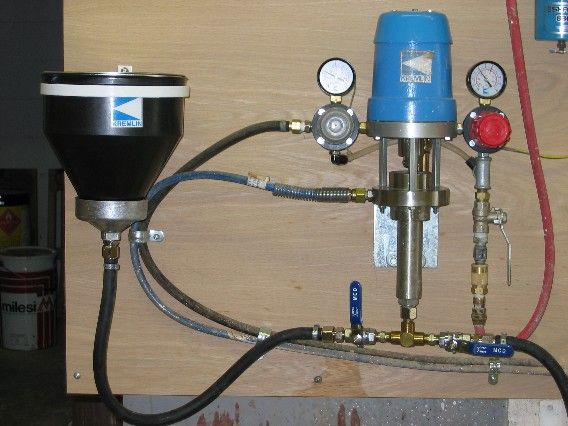 
From contributor Z:
Nice idea, Paul. I like that setup. I'm going to have to set mine up like that also.

From contributor G:
Thanks. I just demoed an Iwata and had the same result that contributor C mentioned - it atomizes almost as nice as our Kremlin, but it doesn't move enough material for whole tops. Paul, many thanks for the tip about the gravity cup on the pump.

From Paul Snyder, forum technical advisor:
I was in the same situation. I needed to spray catalyzed finishes in small quantities at times and wanted to use the pump whenever I could. With the pick-up hose, there was always too much wasted material for these little jobs. I remembered Kremlin had a little pump that was strictly gravity feed and went to look it up in the manual/brochure when I came across the gravity cup and manifold accessories. It works great and gets a lot of use.

From contributor D:
Before you select a gravity gun to be used with a compressor, you need to know how much air (in cfm) your compressor can deliver and how much air you will need for your gun, whichever gun you get. So many guns are air hogs and people who use them often starve the guns of needed air, all from compressors that are undersized for the demands placed on them.

If you are in need of exacting standards from a gun, the Devilbiss Finishline series will pass. And they are not too much of an air hog. Even better on air demands are the Asturo guns. The last thing I want when I am laying out a finish is a pulsating spray, which is one of the symptoms of using undersized compressors.


From contributor E:
Paul, nice tip on that cup. I had no idea they made such a thing. Like the manifold. Looks like it's easy to keep clean.

From contributor T:
Kremlin also makes a great gravity fed HVLP and LVLP cup gun. It's called the M-22G HTI. It has the widest fan pattern I've ever seen on a HVLP style gun. It has a unique nozzle design which allows for finer particle breakup while using less air. It's not Airmix, but it's very nice!

From contributor R:
I second contributor T - just don’t drop it on the floor. Kremlin isn’t as tough as Binks.

From contributor Q:
I have to agree with contributor T. I have one of the Kremlin HTI guns and it is amazing. I can spray any post cat through it. I have sprayed 2K urethane and CV's and post cat lacquers. That gun really does the job better than any gun I have ever owned. I would highly recommend it to anyone looking for a new cup gun.