Tips on applying returns to the end of stair treads. December 26, 2006

Question
The builder I'm working with refuses to buy treads with returns on them from the factory (too much jing, I guess). He wants us to just put the return on without miter (looks like crap). We tried cutting the miter with a jigsaw in the field, but without very good results - the blade always tips slightly. I made a jig to cut a curved miter, as I've seen some factory treads and that works, but I'm not crazy with that either. If any of you know a way to cut the miters on the job, it would be appreciated.

Forum Responses
(Architectural Woodworking Forum)
From contributor C:
Find another builder. Or buy a sliding table saw and a band saw, do it that way, and charge him for it. The curved returns are done on a big boy shaper with a jig or a copy shaper.

The only reason the builder does this is because both you and the end buyer allow it. You don't have to be a part of it. If you don't like it, show some self respect and tell him. Look around a bit - if your skills match your desires, you will land on your feet.


From contributor H:
We use a radial arm saw and band saw. Done the curved ones on our shapers, but they look cheap to me. And clients thought they looked odd. Put them on without a miter? Put what on? Why don't you cut them longer and route the ends? There's no dog ear, but it's
better looking than nailing on a loose piece of end grain. Make a small sample and show the clients. Maybe you can get them to pay more to get what they should have in the first place.

From contributor J:
I personally have not tried making those mitered ends myself, but the factory ones look pretty good to me. If he doesn't want to spend the money on the factory made ones, why is he spending more money to have you custom make them? Unless you are charging very little, the factory ones should be cheaper. They have all the jigs set up to make them fast and cheap!

Like I said, I have not made them myself, but I know it's a lot cheaper to buy a factory made cabinet door, than for me to make one. And I wouldn't think a stair tread would be much different. Sometimes builders just don't get it.


From contributor L:
These are good comments from experienced people. Is the reason for the return to give long grain on the visible side instead of end grain? Why not bullnose the end of the tread and sand it to finish nicely? It seems it would take less time and a good electric or air DA sander will do a great job in about 10 minutes each.

From contributor S:
I've done the miters for tread returns on a table saw with a jig mounted to the miter gauge and the blade tilted to 45 degrees. The tread is held vertically so the bullnose is down. Then I cut the rest of that piece off with a chop saw and finished it with a handsaw. They turned out real nice. However, as everyone else is saying, it is easier and cheaper to buy them pre-mitered. 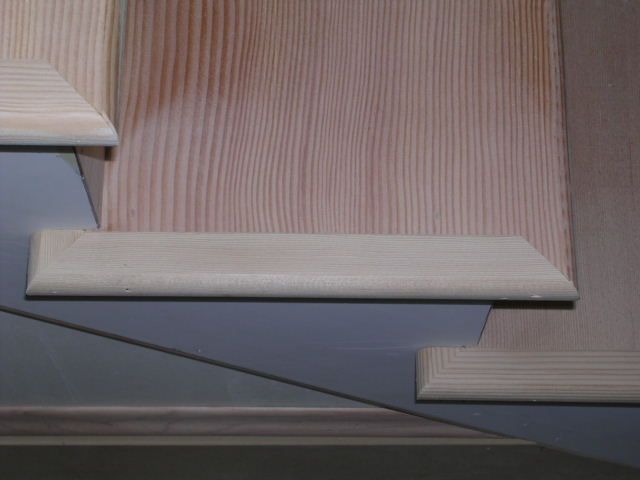 
From contributor I:
I've always done them myself, not because it's cheaper (though it was for me), but because I don't like treads made from glued up stock. I usually did them the way contributor S does - on a table saw with the blade on a 45 - but have done a number of them on jobsites as well.

There I just used an offset back saw and shooting board for the miter and a sliding miter saw (and hand saw) for the rest. I have also done them using either a worm drive or sidewinder skill saw - or both, depending on which end of the tread gets the return - along with a straight edge. The bottom of the straight cut up near the miter will be buried under the scotia, so it doesn't need to be perfect. But I prefer to do them on a good table saw.


From contributor K:
Nike returns aren't all that hard to do without much more than a router. Though if you want simple mitered nosing/returns, cut the factory nosing off and make your own nosing. I mill my treads to 3/4" blanks and spline a 1 1/8" nosing on for mitered nosing.
If you're talking about the LJ Smith/Coffman treads that come with the nosing running long, carefully cut and make a return with your SCMS. Any trim carpenter worth their weight in salt wouldn't think twice about those. For a Nike swoosh, learn to use your inlay bushing setup, and get used to making a lot of templates/jigs.

Comment from contributor B:
I use a sliding table jig. The only issue is that I over-cut in both directions, but they are hidden by the cove on the front of the nose and the stringer. I feed the tread in at a 45 while riding the jig in, then I pull my jig back and ross-cut the straight cut. All stair builders must know how to cut their own, because you can’t always buy open treads for both sides.