Question
I have a bookshelf span of about 54". I'm worried about the shelves bowing too much. The front edge will get some sort of decorative shape on it and I was thinking of solid poplar and possibly veneering both sides with a cherry veneer with a poplar crossbanding. The shelves are 1" thick and will be painted. Will this method work or is there a better way?

Forum Responses
(Cabinetmaking Forum)
From contributor F:
That will sag in an adjustable shelf. If fixed, you can support with screws in through the back.


From contributor P:
Re: bookshelf span Pinetree Furniture Makers 2/24
As stated, you may want to fix the shelf and screw it from the back. Another way is to put two rolls of holes in the back to support the shelf that way. If you can, keep the depth of the shelf as small as possible. That will keep the deflection down on the front edge.

From contributor J:
I would split the 54" span with a partition the thickness of the material used on the carcass of unit. The use of partitions on a bookcase only enhance its function, dividing and supporting reading material. (Just don't get too carried away with the partitions.)

From contributor T:
Plywood is typically crooked at the get-go for the simple reason that it starts out with an uneven number of laminations. In order to keep the outside veneers going in the same direction, it has to be laid up with an odd number of veneers. This extra veneer causes the plys to be stronger in one direction than another. (Try bending a 4 X 4 foot piece of plywood across your knee... it always deflects more across the grain than with the grain.)

Here is a trick that will help a lot: Build your shelf with two pieces of plywood. If you want a one inch net finish, plane two pieces of 3/4 inch material down to 1/2 inch thick. This will cause a terrific imbalance in the plywood, which you can use to produce a pre-tensioned panel. This new panel will be very straight and incredibly stiff. 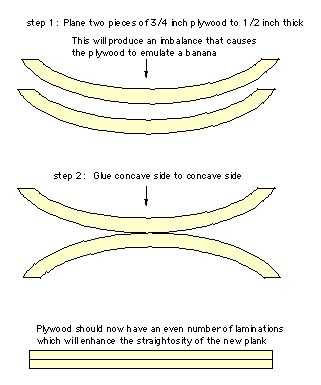 From contributor M:
Whatever your construction, make your solid shelf edge symmetrical so it can be flipped over time. All our shelf edges, no matter what the thickness, have a symmetrical profile.

From contributor C:
Contributor T's solution is the wildest attempt I've ever heard at preventing a non-flat surface. Based upon the "uneven number of laminations" theory of the Universe, he has confounded the problem by clogging the planer with side grain shavings. But, each to his own - it's a big world and lots of room for everybody.

Build a torsion box of two layers of 1/4" ply. Not only is this stiffer and flatter and lighter than the above, it conforms to the "even number of laminations" theory of the Universe, unless you call the space in between the plies a lamination, nothing, or 12 dimensional universes all curled up real tight.


From contributor F:
Not only that, if you build all your shelves like that, you'd better have a couple dozen spare sharp sets of planer knives on hand.

From contributor T:
You both raise some good points. I especially like the torsion box idea. While not the simplest method, it will certainly give you a balanced and lightweight panel. The chip evacuation issue is not a real big deal to me. The dust collector can usually handle that okay. The point about wearing out the planer knives is something that did not occur to me. We've had a tersa head planer for better than ten years and there's usually a lot of beater knives laying around. If I had to set the knives by hand, I would probably be more frugal with their longevity.

Contributor M had the best idea about designing a nosing that worked no matter what the orientation of the shelf. That's a great one!


From the original questioner:
Thanks a lot. Would one strip in the middle of the back with holes and shelf pins be enough to keep it from bowing? It will be painted so it will not be noticeable.

From contributor P:
That depends on the weight. I would do two just to make sure.

Comment from contributor D:
My recommedation is to make the shelves from solid wood, cherry if that is what the customer wants, or to construct torsion boxes as others have suggested. Plywood is not a good choice because the plies with cross grain contribute almost nothing to resist the bending load that a shelf must withstand. A solid wood plank has the highest bending resistance due to its fiber orientation.

You could also increase the bending stiffness of your plywood shelves by gluing thick facing strips of cherry stock, e.g a nominal 1x2 inch strip, to the edges of the plywood, with the 2 inch dimension running in the thickness direction of the shelf.

Probably a better solution would be to build torsion boxes with solid cherry edge bonding strips so you could make them symmetrical and flip the shelves if necessary. Or you could make the shelves of solid oak or birch with solid cherry edges to get great stiffness with a relatively thin shelf compared to torsion boxes added reinforcing edge strips.

I built bookcases over 20 years ago with shelf spans from 26 to 48 inches and depths of 10 to 12 inches. For the cherry bookcase, all of the standards (upright members were 3/4 inch as were the shelves), and for the 48 inch span oak bookcase, I used 7/8 inch red oak. As a precaution I finished all edges symmetrically, expecting to have to flip the shelves occasionally. Even after having been filled with heavy magazines (my entire collection of Fine Woodworking, since its beginning in 1977) and books, including a full set of 1960's vintage World Book Encyclopedias, on those oak shelves, they never needed to be flipped. Some of the shorter solid cherry shelves were occasionally flipped.