Terminating Crown Moulding at a Vent

A high-wall air-conditioning register interrupts a run of crown molding. What are the installer's choices? Pros supply ideas. July 5, 2005

Question
What is the best way to cut a corner with existing molding for areas (shown below) around a vent near the ceiling? I have cut the long pieces to a 148 deg. setting of Miter 10.0 and Bevel 12.5 (left or right depending on side) as shown in the picture. I've allowed for up to 4" horizontally from the bottom of the molding, and 3" to vent from the top of the molding as shown. For the life of me, I can't seem to get this joint cut(s) to work. I'm assuming two pieces would be cleaner? One piece would be fine with me if possible. Any suggestions would be appreciated. 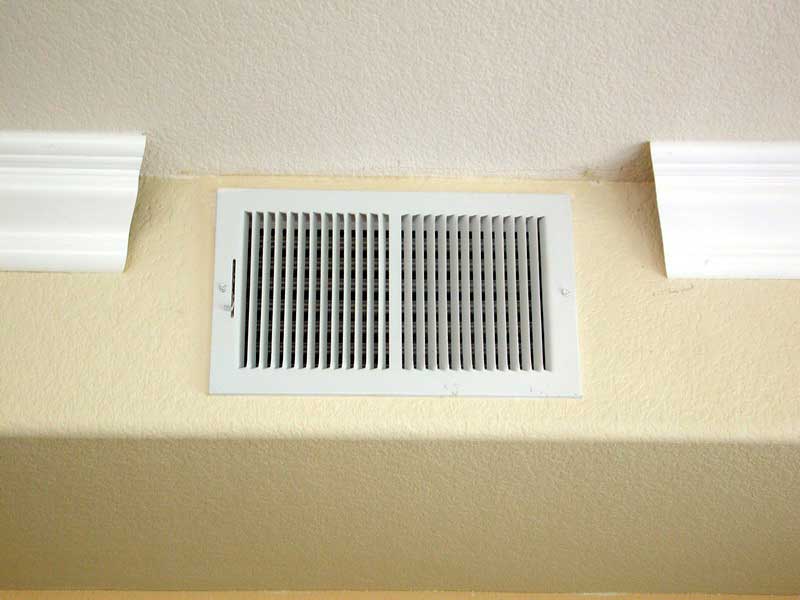 Forum Responses
(Cabinet and Millwork Installation Forum)
From contributor C:
Can the vent be re-routed to below, and then patch the old opening and crown as usual? If not, then I can only think about building an extension and wrap the crown around that. This is definitely a challenge.


From contributor J:
How about finishing the molding, then putting a smaller grill in the opening that would meet the molding?

From contributor T:
You probably can't reduce the vent size due to air flow requirements. How about returning the crown to the wall on either side, essentially just finishing what you've shown in your photo? This would be simple, sweet, and have no duct work.

From contributor C:
I agree with Contributor T. The vent is in a bad location and there is no way around it unless the vent is relocated. I think ending the crown and then resuming it are your only options.

From contributor M:
I think I would return the molding straight up to the ceiling, butting the vent, and maybe add a flat board above the vent, the same width as the molding projection to continue that line on the ceiling.

From the original questioner:
The picture below is from a friend's house from the same builder. I would like to achieve something similar as shown, but I am having difficulty coming up with the proper angles to cut these pieces. Note the miter and bevel angle already cut on the long pieces in my post above. Any more insight or suggestions? 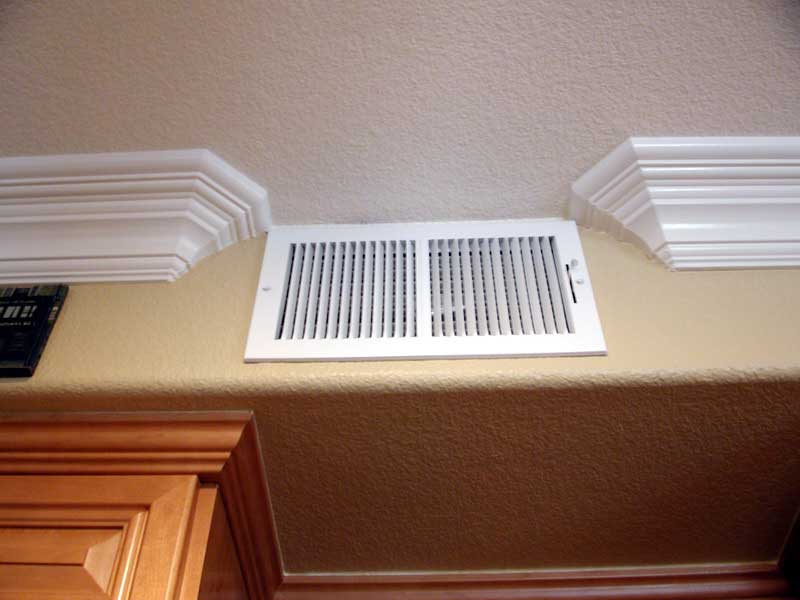 
From contributor D:
I am like everyone else above. I am normally inclined to move the vent, however, my father installed some large crown in his office and had an almost identical situation. He simply cut a right angle return into the wall as close to the vent as possible and it actually looked great considering the options. I think it looked better than actually boxing out the vent or any similar options. Simple, but it looked great.

From contributor B:
Why not continue the crown over the grill. kerf cut to simulate a metal vent grill into the crown. The crown would be attached to the grill and it would be able to be removed for vent access. Make sure proper paint and procedures are used to avoid failure.

From contributor T:
Contributor M has the numbers correct for the second picture. It looks ok. You could reduce the vent to an equal amount of square inches (longer and lower), but you will have to rip up the soffit to achiwve this. It would probably be too much work. The second picture looks acceptable and is commonly done.

From the original questioner:
With the easiest route from what I have to being done, I'm looking to do somewhat similar to contributor M’s suggestion. Given these long pieces are already cut and mounted to an initial 58 degree angle (148 degree), I'd like to attempt to keep them and work in a straight return as needed for the third piece.

This would then make the third piece left side a Miter Right 18.8 and Bevel Left 22.5 and the right side return to the wall a 0 degree (flat) cut. Does this sound right or is something way off? I'm trying to avoid cutting the long pieces again as they are already mounted, caulked, and finished.