A discussion of how Maple wood gets its color, and what the appearance means for the value of the lumber. April 18, 2009

Question
I dropped a bunch of trees this past week that I intend to have milled into lumber. The attached image is from a red maple. In fact, I dropped about six red maples that all looked exactly like this one. This isn't quite the cross section I was expecting to see. Can anyone tell me what I'm looking at? 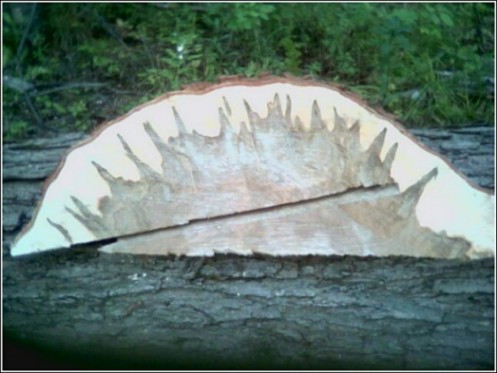 Forum Responses
(Forestry Forum)
From contributor T:
Looks like the right view to me! I'm guessing you were thinking you were going to get nice white maple out of it? Unfortunately it doesn't happen like that, especially on soft maple.


From the original questioner:
You're guessing right. So this is still nice millable lumber, just a different color?

From contributor T:
It's definitely millable. I'm not exactly sure why the heart turns brown/grey like that. I think it may have something to do with the sugar in the sap but am probably wrong. It's just the nature of the beast. It's still useable lumber. If you need maple that'll work.

From contributor T:
That looks like a tree that had many sugar taps over the years. In some areas all maples are tapped not just sugar maples.

From contributor G:
It looks like it might be caused by ambrosia beetle. I’m building some ambrosia maple cabinets now and we paid twice the price for the wormy maple than the clear maple. I’d say good.

From contributor C:
If the rings of the wood follow the outline of the heartwood, I would guess that you will find that you will have a highly figured wood (birdseye, lacing or other). As to which I could not say. The color though is a variation that is not extremely rare. However, the combination of coloration and grain figure could add value, especially for specialty use (musical instruments, fine furniture). Would anyone like to say whether quartersawing would add/detract from the figure of the grain, because it would enhance the (ray/fleck)? The picture is not detailed enough to show the ring structure - could you post a tighter picture of the rings?

From contributor H:
I would mill it. It should make fine lumber but don't be to disappointed if it is somewhat unremarkable. The likeliness of more than one tree being exceptional would be extremely rare.

From contributor M:
Good. It looks like wormy soft maple. Did it come from some wet lowlands? End users sometimes pay the same price as cherry for wormy maple.

From contributor M:
The discoloration is contained by a process known as compartmentalization, which maples are well known for.