Some kind of contamination is creating "fish-eye" finish flaws. But where does it come from? Finishers suggest a whole slew of possible sources. June 28, 2005

Question
I'm having an issue with craters/fisheyes in my finish and paints. I've cleaned and scrubbed every inch of my department (shown in the picture below), and it hasn't improved much. I am wondering if anyone has a list of possibilities or a direction as to where to begin looking? Any help would be appreciated. 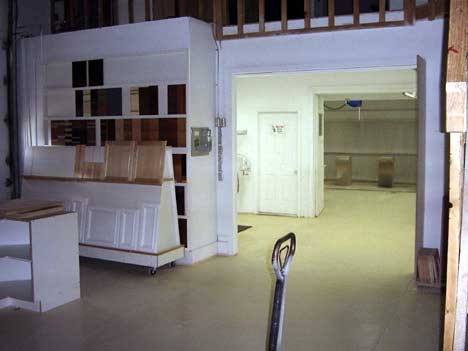 
From contributor J:
I would check and make sure that your airlines aren't blowing oily water first. Also, take a walk around the manufacturing end and look to see if they are using wd40 or silicone sprays on the tablesaws, or waxes on the shapers. Ask and see if anyone has changed the way they clean the equipment. If the heaters are running in the shop, make sure they are tuned up and not blowing any unburned fuel into the air.

From contributor W:
As contributor J said, check your air lines for water/oil. Blow down your compressor and drain any water that might be in the tank. Also, check and change the air line filters. This is basic stuff, but sometimes it is just a basic problem that gets over-looked.

From contributor R:
One idea is to put your finish guys in full tyvek, or equivalent suits, and see if that helps. We traced problems we were having over that last few months to one guy and his detergent/deodorant/etc.

From contributor B:
I've had a few experiences from fish-eyes. Deodorant, furniture polish, and spray dry-lube have all been culprits. I mix my own colors and I was getting fish-eyes from a bad batch of red dye concentrate.

From contributor M:
To the original questioner: Do you do finishing and refinishing.? Were you adding a fisheye flow-out additive to your coatings as a preventative, before the problem? Are you using the additive now ?

I would suggest that everyone who touches your pieces wear surgical gloves. Be sure that you clean all your measuring and mixing tools. Usually, fisheyes appear only the tops of the pieces. Try wiping down the tops with lacquer thinner before you start finishing.


From contributor P:
To the original questioner: That's the cleanest finishing area I've ever seen. Narrowing down the source can take some investigation, but you can do it with a process of elimination. The first thing I'd suspect is the air-line - oil eventually starts leaking in the compressor and it will cause fish-eyes, unless you have a good, well maintained oil-trap.

Clean a piece of glass/plexi with a new can of naptha. Spray a stripe or two and see if you get fish-eye. If so, the contamination is in the spray system, finish, or solvent/thinner you use. Repeat the test with a clean turbine gun to see if it's the spray system. If that's not it, sprinkle a sample of the wood you finish with talcum powder. Blow the powder off and see if it sticks in spots (oil spots). If it does, the wood is getting contaminated somewhere. Lubricants are the most likely source, so check machinery maintenance procedures.

If that's not it, try spraying some wood that's not sanded and some that is to see if the sander/sandpaper is the source. If the spraying doesn’t do it, wear a tyvek suit and disposable gloves. Do some spraying and see if the problem persists. If that doesn’t work, check any work that's been done anywhere in the building recently to see if silicone lubricant or caulk was used.
Have you starting using a motorized fork-lift recently? Have you had a new neighbor in your area that might be putting something in the air?


From contributor S:
Another possible source of fish eye contamination is paper towels. While paper towels have never caused me any problems, I have read from others that they did trace their problems to the use of them.

People should scrub their hands well with soap and water, especially after eating so that they have really clean skin. Deodorants can be a problem, so the tyvek suits are a step in the right direction, as are vinyl or latex gloves.

Maybe you should try spraying/sealing your surfaces with Zinsser Sealcoat which is a wax-free one-pound cut of pale shellac. Try spraying a light wet coat and barely scuff it to create a tooth. Its job is to act as a barrier coat that you can build on top of. It should seal in any surface contamination (hopefully).

Also, try to avoid tack rags. Blow the dust off and dislodge dust with a dust or a shop brush. Vacuum with a nozzle that has brushes on it, like the kind you use for curtains. This should work better that tack rags.


From contributor C:
I recently tried using paper towels for the final dusting of my woods and I was happy with the results. They sucked every mote of dust off without any of the dangers of tack rags. I would rate them about ten times as efficient and effective as tack rags. They also are less expensive and much longer lasting than tack rags.

From contributor D:
I had a customer that was having fish-eye problems. After many days of tracing everything down, we still couldn't find the source. Then one day, maybe a month later, we discovered they had installed a new bigger air make-up in their warehouse. The culprit was a shoe factory about a block away that was putting lots of silicone in the air. He ended up having to add a filter to the air make-up