An extended discussion of the adhesive, veneering or finish issues that could create roughness on veneered pieces after some time in service. June 11, 2014

Question (WOODWEB Member) :
A very good customer called me to say that furniture I had made for her over the past ten years felt rough. When I went to see it, all the veneered surfaces were indeed rough, though the solid wood still felt great. I thought at first that the problem was finish related, but from responses I've received in the Finishing Forum, I think the issue might be veneer checking. I'm still unsure why the veneers have checked, but the question that's most pressing (no pun intended) to me and my customer is what to do about it now. Can these pieces be saved? The veneers that show the most problems are Karelian birch burl, purpleheart, and anigre. Included are some images of the projects. 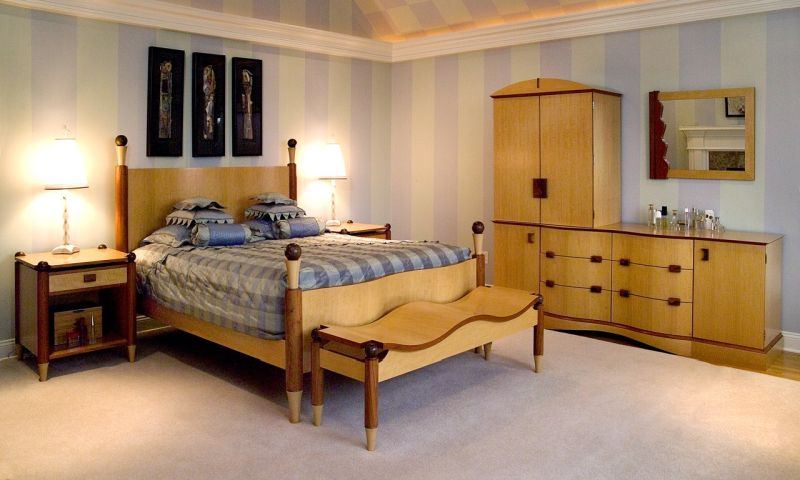 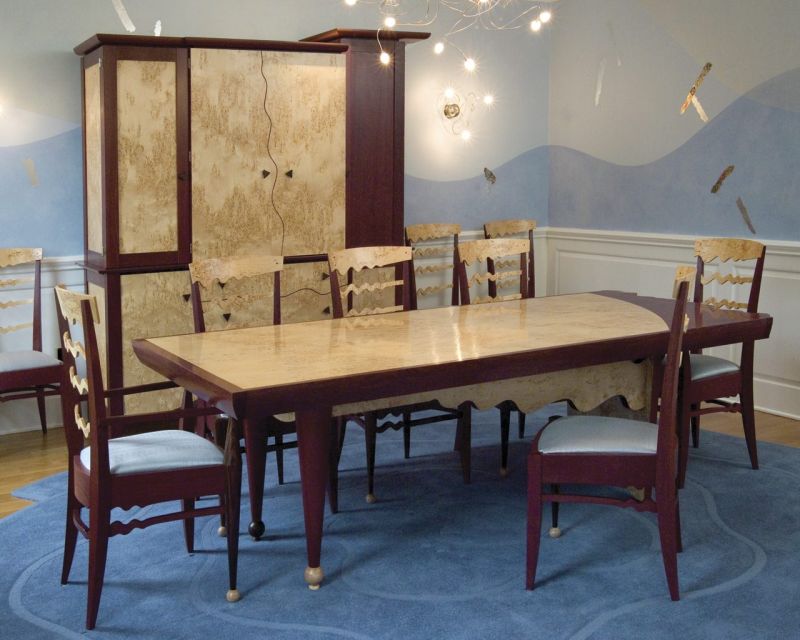 Forum Responses
(Veneer Forum)
From Contributor E:
Can you tell me about the environment that these pieces are in and the type of heating and cooling system and type of cleaner used on the pieces? After reading your finishing post you did mention that the pieces were made in different seasons over a three year span. Yes I think they can be saved without replacing the veneer but first you need to know the cause.


From contributor R:
Just thinking out loud here, but I wonder if the veneer was not done well from the mill. Poor adjustment of the pressure bar or something that would allow heavy checking in the veneer and now after a couple years of humidity changes, the checking is really showing up. I really like the work - love the asymmetry in the hutch!

From contributor C:
If it’s not too bad it can be sanded with 320 and re-sprayed. Try something small.

From the original questioner:
Thanks for the input guys. Contributor E - I'm waiting for a response from my customer to answer your questions. It's a pretty nice house, so I think there's humidity control. I think the heating system is forced hot air with humidity added, and it's central AC in the summer. I'm unsure about cleaning products.

Contributor C - I did the veneer work. It's pressed in a vacuum bag, glued with Unibond. If I did re-spray it, would the checking continue if, as Contributor R suggests, the veneer is poorly sliced?


From contributor C:
To me, it's hard to believe that all the veneer in this house went bad. Either it's in the pressing or the core had a high M/C. Vacuum pressing adds moisture and there is usually no heat to bring the MC back to 7-% or less. On the other hand, if you built up too much finish and there was wood movement (always) the finish could have checked.

We did a desk for a University President some years ago and it checked like crazy after six months (warm, dry office). We made a new one, finished it and replaced it for them. My finisher at the time took the old one and did a serious scuff sanding, sprayed it and I took it home for a desktop. That was years ago and there is not a single check in the top today. It's hard to know what to do or what you have without seeing it, but maybe you should try a drawer front and see how it goes.


From contributor B:
I've had this problem with some Ebony I laid up years ago. I initially thought it might be from an overly thick glue line but I never did figure out what the cause was. Sanding and re-spraying has worked once but I'm not sure how many times it will. I doubt the vacuum bag had anything to do with it; from the quality of your work you obviously know how to lay and glue veneer properly so the veneer or the finish seem the most likely suspects.

From contributor B:
To the original questioner: I forgot to ask whether the rough surface was also on any of the solid wood areas (chair legs, edging, etc.). If not then you've just narrowed down the problem a bit closer to being the veneer. If yes then it's probably either the glue or the finish.

From contributor J:
Did you use MagnaLac by chance?

From the original questioner:
Contributor C - not all the veneer in the house went bad, really just the birch and anigre shown in these photos. Your story about the desk you made (twice) gives me some hope that maybe I can really scuff it and then re-spray.

Contributor B: I hope that re-spraying only has to work once, and that the veneer won't continue to check. The finish is still wonderfully smooth on the solid wood portions of the work; whatever the problem is, it is most certainly just the veneer, and I am very capable of making mistakes laying up veneer or anything else!

Contributor J: I did use MagnaLac. Have you had problems with that? 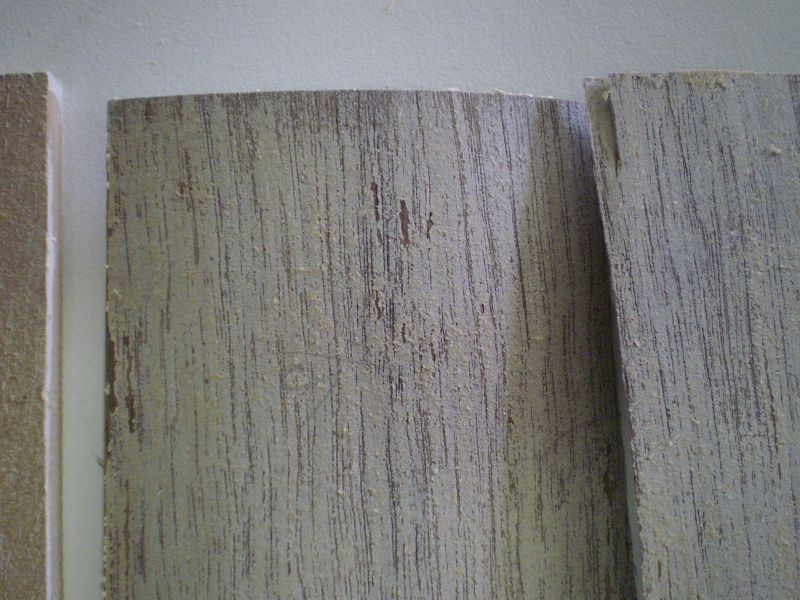 
From contributor J:
MagnaLac had a problem several years ago where the finish cracked and lifted the veneer and caused a de-lam. Check the finishing archives.

From the original questioner:
Contributor L: There is no puckering of the veneer, so I don't think the problem is in the glue bond itself. There's none of that terrible hollow sound when you tap on it with your finger. The veneer is bonded, but I believe it has developed small checks. You can read about veneer checking in earlier posts on this forum.

Contributor J: Thanks for the heads-up. I hope the issue you describe is not the problem with my project, but I'll do some research.

From contributor O:
Was the glue applied thick and wet when the veneer was put down? We know that a thin, starting to dry, glue field will have adhesion voids, but what about the effect of too much glue, read water?

From the original questioner:
Contributor O: The glue certainly was wet when the veneer went down, but in general I don't think it was too thick, although there was some bleed-through in spots. Since I used Unibond in these glue-ups, however, there was no water introduced to the substrate or veneer. From what I've gleaned from this thread and other sources, it sounds like too much PVA or other water-based glues can create conditions for veneer checking if they are put on heavily and the veneer is allowed to sit a while on the glue before it gets pressed, thus picking up a lot of moisture from the glue. As the veneer dries out it can check.

From contributor Y:
I've had this happen several times in the past. It is most probably a breached or missing moisture barrier. If the barrier coat (vinyl sealer or equivalent) was sanded too aggressively before top-coating or was not applied in the first place, moisture can through contact or condensation, penetrate the top coat and swell the veneer fibers. All lacquer top coats are permeable. You should be able to scuff sand the pieces and then shoot a heavy coat of vinyl sealer and then another top coat. Problem solved.

From the original questioner:
Contributor Y: Thanks for this. It seems you're saying that lacquer is permeable by moisture but vinyl sealer is not. Am I reading you right? I've read that shellac is a good moisture barrier and thus a good choice for some applications, but I thought the only advantage of VS is good adhesion and possibly easy sanding as a first coat. Some of the other posts in this thread have suggested a treatment similar to what you outline, but with top coat only rather than sealer followed by topcoat. Do you think the topcoat only process will not solve the problem?

From contributor Y:
Unless your finish is waterproof (Cat Lac, Polyester, etc.) you must use a barrier coat below the finish. Shellac won't cut it. Another layer of your top coat won't cut it. Vinyl sealer is relatively inexpensive, crystal clear and only adds one more spraying. It’s better than going back and picking up your pieces and transporting them back to your shop for repair. It's possible, though not probable, that this isn't the cause of your problem, but it's the easiest repair you can make and will most likely solve the problem.

From contributor W:
My guess is that it is the finish. I French polished an antique drop leaf table that had solid mahogany base with a mahogany crotch veneer top, and there were parts of the top/veneer that cracked similar to craquelure on oil painting. The cracking happened after the first winter and there was no cracking on the base. The good thing with shellac and French polishing is that it can be melted or re-amalgamated fairly easily which I think lacquer will do also. I actually left it as is since it gave the finish the appearance of age. Shellac is definitely not a barrier coat.

From the original questioner:
Contributor Y and W: Thanks again for the input. Believe me; I'm very happy to spray vinyl sealer as a first coat if it will keep this from happening again. I've just never heard that VS had any particular moisture barrier properties. But as I get older I seem to know less and less rather than more and more. So VS is more moisture impermeable than pre-cat lacquer?

From the original questioner:
OK, then. I'll be taking these pieces back in the shop this winter to work on them. I'm going to give them a vigorous scuff sand, clean them really well to get off any oils and silicone, then coat them with vinyl sealer and pre-cat top coat.

From contributor Y:
Good luck. You might get some information on CAB Acrylic Lacquer as opposed to the pre-cat. I've used Sherwin Williams products for years and love them.