An older-model cup gun has developed problems pulling fluid. Is it fixable, or is it time to get new equipment? March 2, 2006

Question
I have an older Apollo HVLP turbine sprayer that uses its original siphon gun. I have been using it for a couple of months to spray pre-cat lacquer and it has worked very well. It has recently started to not want to pull the lacquer out of the can. I took the whole thing apart twice and it all appears to look ok. Now it had degraded to the point where it hardly pulls any liquid out of the can. It just spits a little periodically. The turbine seems to be putting out plenty of air. Does anyone have any recommendations? Can the needle cause this?


From contributor D:
Contributor J's right. It's a pressure problem.

From contributor S:
Then, it's a pressure feed gun but with an attached cup, not a remote pot. If it has a pvc check valve where the small line connects from the gun to the cup these valves often become fused closed and need to be replaced. Make sure that the cup is getting its supply of pressure – that’s where to look, as the previous writers already advised.

From Paul Snyder, forum technical advisor:
Contributor J described the problem well. Turbine spray guns need an air supply to the cup to assist fluid flow. If the air supply is blocked at any point, the gun will spray for a moment and then stop once the cup runs out of air. A leaky cup lid seal will stop the cup from pressurizing and the gun won't spray.

I'm not sure if the older Apollo is exactly the same, but the new one has the air hose running from the side of the gun to the top of the cup lid. Under the cup lid there's a 'duck bill' style check valve that keeps the finish from running up the hose if you tip the gun too far. You may have a check valve in the middle of the air hose between the cup and gun. Usually, the check valve will stop the fluid from getting all the way to the gun body and drying inside the gun. Instead, the dried finish/blockage is at the cup lid or the check valve.

I wouldn't remove the brass fittings, but would pull the air supply hose and make sure air was coming out of the gun fitting and then visually inspect the fitting in the cup lid and clean as required.

Here are a couple pictures of the new gun that show the air supply to the gun and the 'duck bill' check valve under the cup lid. 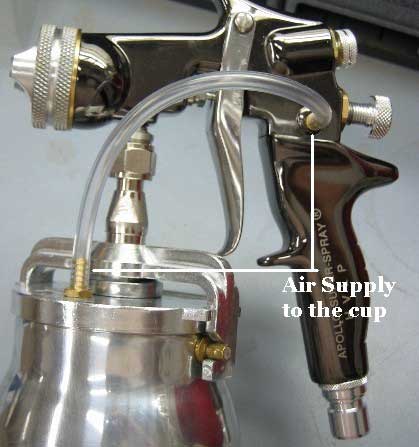 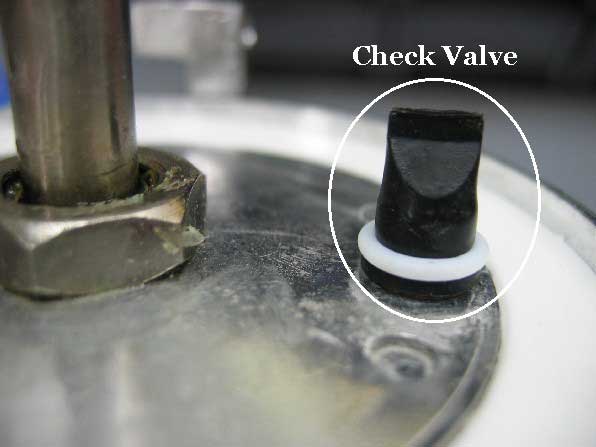 
From the original questioner:
Apparently this is a pretty old cup/gun because it doesn't have an air line to the cup.

From the original questioner:
This is the siphon gun that I have. 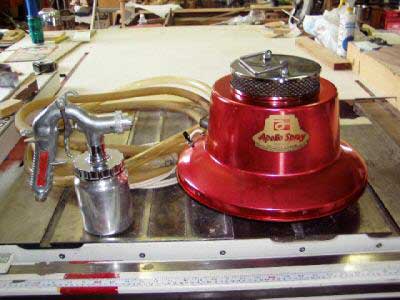 From contributor J:
With a siphon gun there has to be an air inlet that will allow air into the cup to replace the fluid as it is siphoned out. If the inlet is blocked the fluid will not flow. I would suggest that you contact the apollo manufacturer and talk with a tech.

From Paul Snyder, forum technical advisor:
To the original questioner: That is an old gun. If it's like other guns I've seen with that shape, the air is supplied through the shaft that comes down from the gun body to the cup lid. If so, there should be some sort of seal inside the cup lid that allows air to come down into the cup. I'd remove the cup and check the lid to see if the air supply is blocked with dried finish.

Try spraying some water to see if the gun stops after a little bit. If it does, place you finger over the nozzle and pull the trigger. You should feel the water bubbling as the atomization air is forced back through the fluid passage and into the cup. Then the gun will spray for a little bit again. That will let you know the cup isn't getting air.