A waterbased adhesive may be causing freshly applied veneer to swell on application, then shrink within a few days. July 24, 2006

Question
I recently posted a thread called cocobolo and to my surprise there were no responses. Now the project is done and after a few days the cocobolo seems to have shrunk in width, causing seams. It had to have shrunk because all the seams are becoming gapped including where it meets the maple inlayed boarder. I cleaned the material with acetone to get the oils off then glued them together with Titebond I. Then I did the same procedure, then glued them to the substrate. Why is this happening?

Forum Responses
(Furniture Making Forum)
From contributor A:
I don’t think you are giving enough information to go on here. What exactly did you build? How thick was the exotic wood? Was the maple inlayed into the cocobolo? Other than that, as Gene often says, wood will not change dimension or shape unless there is a change in its moisture content.


From the original questioner:
I made a table that has a cocobolo top, maple inlay border, then alder legs and aprons. I resawed the cocobolo into 5/32" veneer then glued them together and let them dry. Then I sanded the veneer sheet and cleaned it with acetone then glued it to the substrate. After putting the legs and apron together I put a ledger strip along the inside of the aprons. This strip holds the cocobolo top and makes the legs and aprons flush with the top. After gluing and setting in the veneered top and letting it dry, I routed a 1/4" x 1/4" groove around the seam where the cocobolo meets the legs and aprons, then inlayed a maple border. In retrospect, if you look down on the table you can see the top of the alder legs and aprons, then a maple inlay, then the cocobolo veneer. Now the strips of cocobolo are shrinking in width causing gaps between each strip and between it and the maple. This is after it had one coat of wipe on poly.

From contributor B:
Is the cocobolo shrinking? Or is the substrate expanding? If you used Titebond to glue the veneer to the substrate, the water coming out of the glue into the substrate may have caused it to expand. If that is the case, you may get lucky and have it come back as the moisture fully evaporates - which could take some time if it has to penetrate the oily cocobolo veneer.

An analogy might be the scenario with biscuit joining. A number of people have discovered, to their dismay, that when they did a glue up using biscuits, and then sanded the slab immediately after it came out of the clamps, several days later there were depressions in the surface, coincidentally right where the biscuits were. The cause was the surface swelling where the biscuits were; then they sanded that flat; then the wood settled, and now there is a depression.

From the original questioner:
That sounds feasible. I will give it a while and see what happens. How long should I wait before I give up, sand the top again, fill the gaps, and then refinish?

From contributor C:
Is the maple inlay glued to the substrate and the apron? It sounds to me like it is. And is your top glued to your base? If so, that's an oops. The maple didn't need to be 1/4" - it should have been thinner than the cocobolo so that when it moved the maple would go with it, and not stick to the substrate and base. Your top needs to only be screwed to the base with holes big enough to allow the screws to move with the top. If your top had been solid wood and the conditions were right you might have a pile of kindling now instead of gaps. Probably the better fix would be to have your maple on the base and have some sort of tiny bevel or something where the maple and cocobolo meet so when there is movement it will look minimal - but I'm no expert.

From the original questioner:
Unless I missed something I don't think the top will move as if it was a solid top. The substrate is ply and the cocobolo veneer is glued to it. The maple is glued to the apron which is irrelevant to the situation because it is long grain to long grain and it isn't moving anyways. The only thing that is visibly changing is the cocobolo and I'm assuming that it was either the initial glue up where the water from the glue soaked into the cocobolo or it had something to do with the humidity in southern California. It's been pretty hot and seemingly humid lately. No matter what, if it was around the edge only I may think you are on track, but once again it is all the seems of the cocobolo only. The cocobolo is cut into 3-1/2" sections, then resawn and bookmatched. Every 3-1/2" a gap is forming. It is not pushing out - each individual piece of cocobolo is shrinking in width away from each other and away from the border. I will see if I can get a picture posted of the actual gapping tomorrow. I may have built it wrong I admit. But I think it will be good for everyone to see it before they make that judgment because I don't think so having just watched how David Marks built the exact same table using the exact same methods. He used a different exotic though. It looked like a red suede blanket.

From contributor C:
You'd be surprised by how much plywood really does move, and I only believe it because I've observed it with my own eyes. Not only will wood expand and contract in width across the grain, but the length will do the same - usually not as much but it definitely moves. These are some of the reasons I hate doing veneer and inlays. Eventually something moves - but like you said, there’s no way to tell without seeing it. Is there any way you could remove the shrunken coco?

From the original questioner:
Here is the picture of the table. The white lines you see is dust collecting in the gaps that are forming. I think I will wait a few more days then sand, fill, and finish, take it as a learning experience and be happy with my new table (not meant to be mine). To contributor C: I believe ply moves too, I wasn't doubting you. I just feel that if it was the ply expanding I would see gaps in the border or somewhere along the outside of it and not in the middle between the veneer. I guess it could have expanded left and right but we are talking a total of 1/16 or better over the whole top. Very weird. 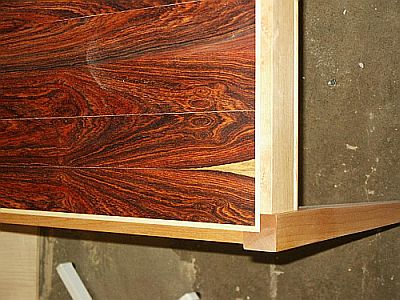 From contributor D:
Although not exactly your problem, as far as plywood moving, when using plywood in just normal house construction both roof decks and subflooring, etc., on the plywood it is spec'd to leave 1/8" gap between sheets just be cause it can move that much. Gone are the days of any kind of quality in sheetgoods.

From contributor C:
How long after resawing did you glue up the veneer?

From the original questioner:
After sanding it all smooth I didn't touch it for roughly 24 hours. Then when I got ready I used acetone, then glued up, let dry overnight, then sanded again. It seemed fine for about 3 days.

From contributor E:
If you used Titebond to glue this sawn veneer down, that is your problem. First, the Titebond puts excess moisture into the veneer, then when it dries out it shrinks back down. Also, Titebond is not a rigid glue - it will allow cold creep. I would only use a urea resin glue for any kind of veneer work.

From contributor C:
Next time, if you've got the time, saw the veneer and let it sit for a couple of weeks, stacked, so air can get to it. It could've had a high MC, and thinner wood will dry faster than thick, no matter what kind of glue you use. I don't believe Titebond will cause wood to shrink more than it normally would. Swell it – yes - make it shrink more when swelling goes down, no.

From the original questioner:
Thanks guys for the responses. I don't know what happened. All I know is that everything was tight when it got glued to the substrate then it wasn't. Good thing this project was more for personal experience and not for a customer. I build mainly custom cabinetry such as kitchens, and entertainment centers. Building furniture is a passion I long to learn. Doing the joinery is no problem but I am new to exotic materials and veneering, specially resawing. Anyways live, learn, do better next time - and do it all without throwing the project across the room.

From Gene Wengert, technical advisor, Sawing and Drying Forum:
Regarding the suggestion to let the veneer sit before using it, it is important to let it acclimate to a dry environment. Oftentimes, letting it sit in a shop over the weekend without any heat or HR control, the RH will be high and the veneer will expand. If you use this veneer on Monday morning, trouble is likely. I suggest having a small plastic enclosed room with a dehumidifier in it for storage.

In cases like this, I note that the surface opening is wider than the base (or bottom side) opening. This indeed confirms that the veneer was too wet. The adhesive you use was indeed a source of moisture; this may be the main problem or it could have been that the veneer was slightly high in MC and the adhesive added enough to make the MC issue a problem. Next time try using a PUR without water - follow instructions, especially regarding ventilation.