Widebelt sanders use an electric eye to control belt oscillation, and the system can malfunction in peculiar ways. October 19, 2014

Question
I have a two headed 42 inch Butfering sander. Bought it new and have had it in service for about 12 years. It's been a great running machine all this while. It has a couple of levers at both ends of the drum that act as safety switches. It the belt makes contact with these levers it shuts the machine down. Lately this has been happening quite often. It happens with new belts or old belts. As I understand it the machine has an electronic eye. As the belt travels back and forth on the idler drum this electronic eye signals the drum to shift position and bias the belt in the other direction. (I think that is how it works). I am thinking maybe the electronic eye is dusty. I have tried a bunch of times but have never yet been able to locate this electronic eye. What does it look like? Is this just electronic eye just an urban myth? How does the sander accomplish tracking?

Forum Responses
(Cabinetmaking Forum)
From contributor L:
Sometimes you will find the belts are too thin and the IR shines through. It seems strange but if you put a piece of tape or black marker over the IR eye it will track properly. Buy high quality belts and the problem may go away.


From the original questioner
These are pretty high quality belts. We use the purple 3M product and there is a new belt on the head that is having the problem. We have been using these belts all along without a problem.

From Contributor B:
There's a set of sensors somewhere. If it is running off one side consistently that's the side where the sensor(s) have a problem, if randomly both sides then both sensors could have problems or there's a problem somewhere in the circuit. Is the idler moving at all?

From the original questioner
I’m not sure what you mean by the "idler". I can't actually see anything operate because the door has an electronic lockout. The machine won't run unless panel door is in place.

From Contributor B:
If you feel comfortable doing it, you can tape the door switch down and watch the sander operate. The upper roller should be moving slightly up and down to pitch the belt back and forth.

From the original questioner
I'll figure out how to bypass the door lock and try that tomorrow. My hunch is that the idler is moving up and down because the problem is at best intermittent. What does the sensor look like? I used to have an infrared sensor on my shop door that rang a buzzer when the beam was broken. Does the electric eye work like this?

From contributor M:
Contributor L is right on this. Spray paint the end of the belt about 3" in and it will solve your problem. 3M belts seem to be the worst by the way.

From the original questioner
What do you mean by spray the end of the belt? Would this just be a dash of paint on the inside circumference of the belt? I’ve never heard of this before.

From contributor M:
Yes, just spray paint the inside of the belt all around about 3 or 4 inches in from the edge. It keeps they eye from seeing through the belt and giving a false reading. I just had the same problem a few months back with 3m belts and this fixed it. The belts are obviously getting thinner because it just happened to me suddenly to with a new shipment of belts.

From contributor M:
I guess I should say paint the end of the belt for about 3" in - not just a line 3" in from the edge.

From the original questioner
I will give that a try. Did you paint the three inch band around the entire inside circumference or do you think a 3x3 inch square would show up often enough (like a timing light)?

From contributor M:
I would just paint all the way around. Just takes a few seconds. The square may work, but haven't tried it.

From contributor L:
A piece of masking tape over the IR sensor or reflector works well too.

From Contributor U:
On my sander, there is just one IR "eye". When the belt is in front of it, the air cylinder operates the pivot on the idler roller to push the belt away from the eye. When the beam is not reflected, the pivot pushes the belt back towards the eye. So if the belt is running off on the side with the eye, then you know it is not sensing the belt. If it runs off the far side, then either the belt has a slight taper, or the pivot cylinder needs serviced or adjusted because it does not put enough tension on the pivot to move the belt back towards the eye. Here is what the eye looks like on our SCMI / Sandya (little black rectangle below the limit lever). 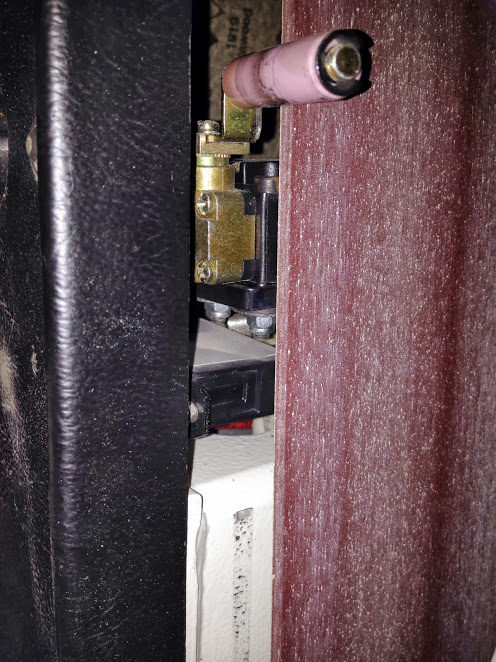 
From contributor S:
I did have issue with 3M cloth backed belts some time back, not tracking. I determined that the IR was penetrating the belt. This is on my old Lobo 37. I took the belt off and turned power on my machine - the tracking circuit works without the main motor running so there was no danger. I was able to interrupt the beam with a my hand so I put the belt back in and manually slid the belt back and forth - sure enough the belt was not consistently triggering the tracking cylinder.

So I simply made the IR "eye" less sensitive by (don’t laugh) a piece of kitchen paper towel and a rubber band - it took two wraps around the "eye" but it was just enough. Same idea as Contributor L used but different solution . I was desperate to get my job done and this allowed me to finish. I will admit I left it on- no ill effect in the past couple years.

To the original poster: Maybe try a different brand belt, it may help you localize your particular problem and it could also be mechanical issue – may be an electrical/air relay going bad. If you are not really a mechanically or electrically minded person it might be best to call in some service help. You say it has done well for many years so maybe it is time for professional TLC.


From the original questioner
I'm hoping I tracked down the culprit. I finally found the electronic eye. It's hard to see it because it's really buried. We were able to get this picture by sticking a camera inside the machine. Another thing I haven't seen in a while is the outboard end of the sander. The only side we ever see is the side we load on. As you can see there is a lot of very old dust at this end. The second shot is the rear side of electronic eye housing. It's easy to conclude that dust build up here will give you a false reading. We gave the machine a thorough cleaning. 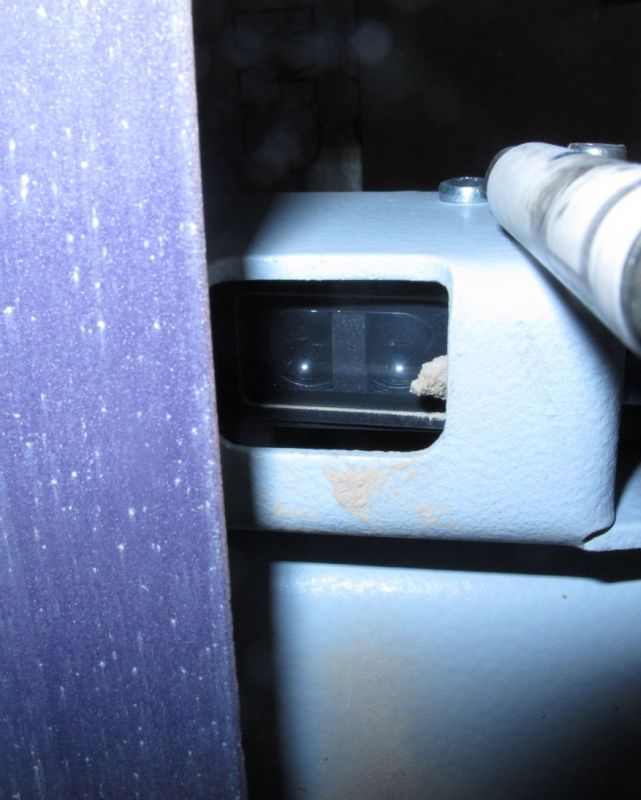 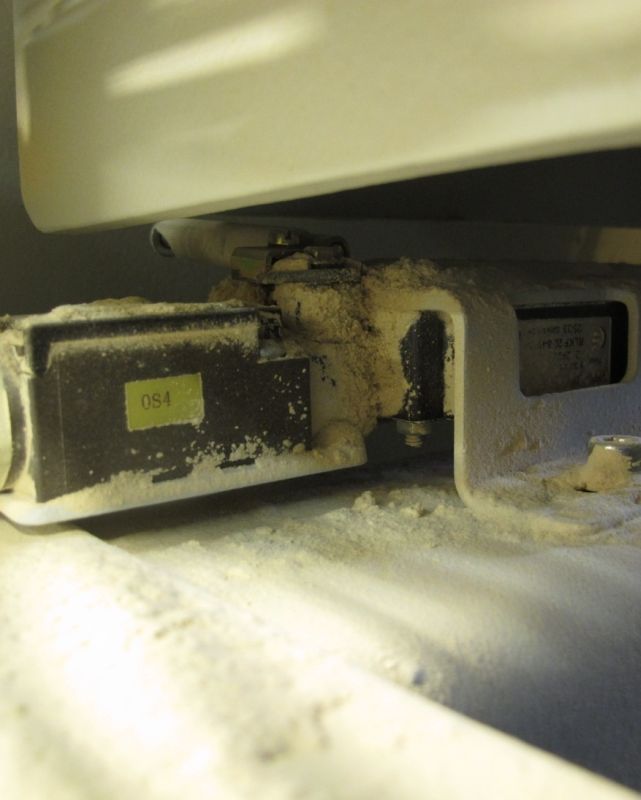 
From Contributor W:
Many of these electronic eyes are adjustable for intensity if that is actually the problem. I find that some belts actually diffuse the light from the sensor rather than allow it to pass through as has been suggested. The 3m ceramic cloth back is known for causing issues. The shiny nature of their cloth seems to have something to do with it. Ceramic belts are the worst thing you can do to a piece of wood anyway. They get dull and smash the surface of the wood causing fluctuations in color that can be hard to trace. I am betting your eye is just dirty. A little clean up and making sure the belts are tracking back and forth at the same speed will help.