Question
This has been the longest 3 days in the spray shop in a long time. I have a nice job to spray, so I bought a new fluid hose from my local supplier. Same kind I always get. I sprayed a bookcase unit with MLC post-cat Clawlock tinted white primer. It looked great after just 1 coat.

First mistake, no catalyst added. Okay, tragedy, bummer, nightmare - but fixable. I stripped it all down with rags and lacquer thinner. I let it dry for a day or so, re-filled the pot with a properly mixed batch of Clawlock, and sprayed it. It looked good once again... And then, stuff started turning a light blue in color. Not everything, just the second coated stuff. I have no idea where this came from. I do not spray any other colors from this gun and pot - white only. My only thought is that the new hose is either the wrong type or catalyst is reacting to it. I had zero issue when I first sprayed it.

Tomorrow, I will try to put an old fluid hose on and see how it goes. I don't know what is going on.

Forum Responses
(Finishing Forum)
From contributor H:
What color were the rags you used to strip down the first coat?


From the original questioner:
White cotton. It's got to be the hose. I'm so stumped.

From contributor R:
My guess would be the same as yours - the material hose. If the inside of the hose is black, that would certainly add to the indictment. Many blacks are actually very dark purple, such as black Sharpie markers. Whenever I am dealing with a process that suddenly breaks for no apparent reason, the first question I ask is "What changed?"

What color was it tinted to?


From the original questioner:
I switched hoses today and no blue. Now I've got to go strip all that is blue. I'm kind of miffed at my hose guy. I will call MLC on Monday to get their recommended hose type.

From contributor W:
Hoses to carry solvents, finishes, and the like always have a nylon or similar inner liner - a hose within a hose - since solvents will attack the neoprene or normal rubber of hoses. Mine is a Binks and is marked as a Solventall, I think. If your hose doesn't explicitly say something to that effect, it is the wrong one. Need to check that the next time and not depend on the dopey supplier.

From contributor G:
This is too much of a mystery to be solved by blaming a hose. I will be astonished if it turns out to be the hose.

1 - The hose guy knows hose. MLC isn't going to give you the wrong hose.
2 - Were the hose degrading, you would see chunks and particles in your finish.
3 - If the hose is leaching color, it would be patchy and streaky - not smoothly even.

And, the kicker:
"re-filled the pot with a properly mixed batch of Clawlock, and sprayed it. It looked good once again... And then, stuff started turning a light blue in color. Not everything, just the second coated stuff."

If it were color coming from the hose, it would have been noticeable immediately. It would not develop gradually and only on the second coats.


From the original questioner:
After today's nightmare, I've determined it's probably not the hose. I switched to an older one that was too short and it sprayed fine. I was doing well until the end of the day and then boom, one back turned blue, and some little molding pieces as well. I cannot find the connection at all. I sprayed two identical 1/4 inch backs, one right after the other. One turned blue, one stayed ivory, sprayed within 30 seconds of each other. And you're right, contributor G - it's way too uniform. I'm suspecting some sort of reaction to thinner I used to wipe down the wrecked first coat, but even that has questions. It was the right thinner and it was clean. Next step is my sales rep and tech support. 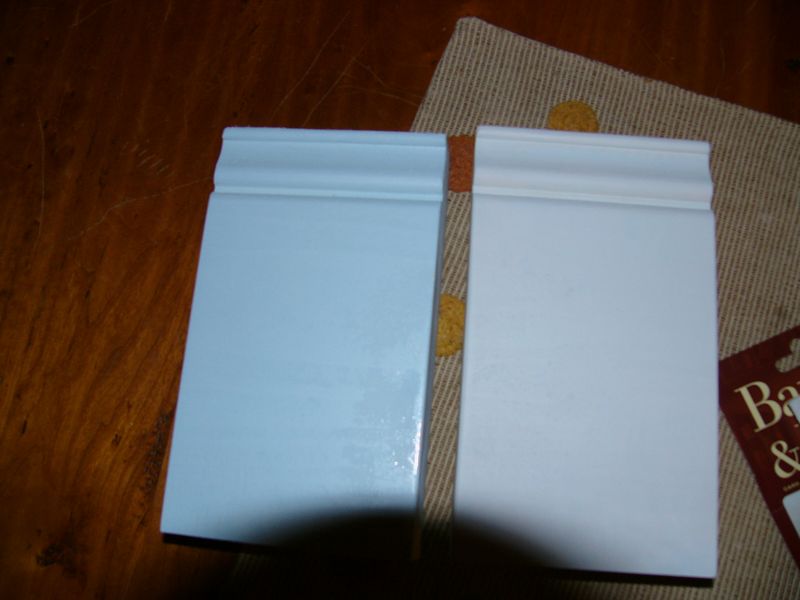 
From contributor B:
What about the guys who mixed/tinted the primer to the ivory color? Do they tint lacquer products on a regular basis? They know to use a special colorant for lacquers, don't they?

From the original questioner:
Well, we may have an answer. Two guys from MLC came out and were stumped after looking at everything and questioning me like the FBI, but as we eliminated things, the MLC rep said it had to be from an outside source. So we took a look at the compressor. Seems someone, not me, overfilled it badly with oil and it is misting out of the motor and down the side of the tank. He thinks it has gotten in the line (we opened up the valve and the water was greasy) and my regulator/water trap near my tank was inferior. So he surmised that one little random drip every so often was mixing with the primer to create a quick 3-4 second blue burst. That's why nothing was consistent. I had pieces right next to each other - one was blue, one was white.

We bypassed the entire air system and went with a small compressor, did some spraying with another gun, and all was fine. Now I have a lot of work to do. I've got to get rid of lots of line and drain the compressor to the proper level. I've got to get a better inline filter and just start over. We shall see, I guess. I must say MLC was terrific to me. They sent me a new gallon of primer at no charge for my troubles, even though it's not their fault.