Troubleshooting the Air Tracking on a Widebelt Sander

A cabinetmaker gets help with the analog control mechanism on his widebelt sander. March 12, 2015

Question
I have a 1986 model 43" A.Costa wide belt sander. It has the air tracking system on it. It’s to the point where it will track one way, but not the other. It has a dual acting air cylinder that moves the head back and forth. It moves fairly fast one way, but is really slow moving the other way. It has an air solenoid valve (I think) that is controlling the air to the cylinder. I'm not sure if the air solenoid is messed up or if the air cylinder is messed up or clogged up. I would appreciate it if any of you could let me know what the problem might be and where I can get parts for this sander.

Forum Responses
(Cabinetmaking Forum)
From the original questioner:
Actually, I looked again and its a 1984 model.


From contributor K:
Try disconnecting the air lines from both sides of the tracking cylinder and assessing the airflow at those points. If the solenoid is working correctly it should be directing air equally and alternately to each side. If the cylinder is receiving the correct airflow, it may need a rebuild or replacement. If not, the solenoid may be faulty or the lines to the cylinder may be clogged.

From the original questioner:
Thank you Contributor K. I appreciate your help. I will definitely do that. That should pin down where the problem is. Would you happen to know where I could get a rebuild kit or a new air cylinder, if it turns out that the cylinder is messing up?

From Contributor D:
Is there a lubricator on the air inlet to the machine? If so, is there oil in it?

From the original questioner:
I checked the lubricator and it was empty. I'm going to get some air tool oil and put in it. Thanks again.

From Contributor W:
It sounds like one solenoid is not closing. If it's a double acting cylinder there should only be pressure on one side at a time. Many machines use a single sided cylinder with a return spring. I'm not sure of your eye set up.

From the original questioner:
Thanks Contributor W. As far as I know, there is not a return spring. I've wondered about a solenoid not working also. I don't see any kind of an eye anywhere, so I'm guessing that maybe a timer mechanism is used to track it back toward the air jet with the spoon looking switch. I recently replaced three air solenoid valves on my gang ripsaw and everything went back to working. So, I was wondering if an air solenoid valve might be the culprit on the sander too.

From Contributor W:
If you have a jet of air pushing against a spoon like object you have a very basic form of air tracking. Cutting the air jet with the belt causes the cylinder to fire and push the belt back the other way. There is no timer. Once the air jet is reestablished the belt will start moving back to cut the jet again. You should be able to manually cycle the spoon to get the air to switch from side to side on the cylinder. It would be very easy to figure out the side that isn't cutting all the way off and clean up or change that valve. It might be as easy as tracing the valve and just taking it apart and cleaning it.

From Contributor W:
The belt should be adjusted so it naturally tracks toward the spoon switch. It just wants to go there. Cutting the jet is what pushes it back. No need for two switches. I can't tell you where the valves are. Follow the hoses from the cylinder. They will lead you there. Sorry I am not more helpful in that regard.

From the original questioner:
Thank you very much for all of your help Contributor W. I really do appreciate it. I will follow the hoses to find the valves. Do you know where I can go to buy new valves, if I do decide to replace them?

From Contributor E:
I had to buy some for SAC wide belt a number of years ago (they were Italian). I Googled the name on the component and there was an outfit in NC that stocked them. They're not that hard to track down, I just can't remember the name of the company.

From the original questioner:
Thanks Contributor E. Do you happen to remember how much the valves cost? I have attached a picture of what I think is the air solenoid valve on my sander. 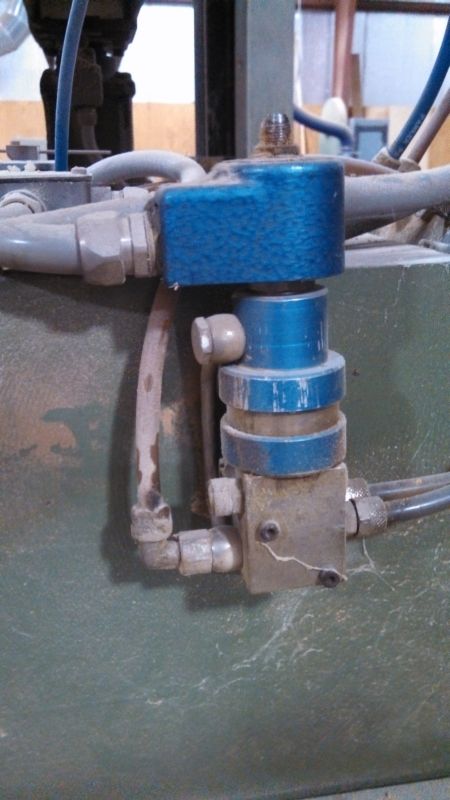 
From Contributor W:
It looks like it was taken apart before. You might be able to disassemble it and clean it up well. I've never seen that setup before.

From Contributor E:
The name of the company I bought mine from was rankinusa.com. It took me some time to remember their name. As for cost, I didn't think it was outrageous. There was a mfg. name on mine as well as a part number so it was easy to find the right one.

From the original questioner:
It does look like it’s been taken apart before. I may try to disassemble it and clean it. If I'm not able to, I will contact the two places mentioned.