A cabinetmaker gets advice on raising an already installed island by two inches. September 23, 2006

Question
I finished building an island (except for finishing) and stopped by the customer to talk about install date. When I originally met contractor at customer's home to discuss the design and island height, she approved, and it was put in writing in the estimate to the contractor, a finished height of 38" (cab height 36-1/2"). Since she wanted to have seating on one side, I told her because of barstool heights, 40" is the norm, but she decided on 38".

Now she calls me and says she's bought stools and wants the island up to 40". She says she told contractor but he never informed me of her height change. I know I'm off the hook because it’s in writing but what I'm wondering is what can I do to raise the thing up and not look hokey? In order to get it to her new height, the toe kick is over 6"! Does anyone have any suggestions on what to do?

Forum Responses
(Cabinetmaking Forum)
From contributor A:
If they're putting stools around it, the toekick won't be missed, so maybe a solution would be to lose the toekick altogether and build a tall baseboard making the island look more substantial and furniture-like.


From contributor B:
I like contributor A's idea - I think that would look good. Another possibility, depending on the style of the cabinetry, would be to use a spacer at the top - a simple molding with some detail wrapped around it to "blend in" to the look of the cabinetry. It may make the c-top installation a bit trickier though, depending on material. Whatever you do, the ideal is to have it look like it was planned that way from the start. Try a couple mockups to see how it will look and let the client make the final decision. If it is the contractors fault she may not want a cabinet that's been "fixed", I know I wouldn't. She may want the cabinet re-built.

From the original questioner:
The toe kick is only on one side - opposite the bank of other kitchen cabinets on the wall. She plans on using the island to prepare food, etc. I think it would be uncomfortable to stand there and work without a toe kick though. To contributor B: I like your idea about raising the countertop and then wrapping the extension with moulding. I've put it up on blocks and tried some moulding combos, but it doesn't look right. Thanks for the ideas.

From contributor C:
What about removing the toe kick and making some kind of feet? Something so it looks like it was meant for the bottom to be 6 inches off the ground. If you need electrical or plumbing, make a box set back 10 inches from the edge and black it out as a chase. Then the legs still appear to support the island and you have the furniture appearance. Seal the deal with the comment that this is an upscale look.

From contributor C:
I forgot to mention - this change is not your fault so charge a change order charge. Do not eat the expense of this.

From contributor D:
Sit down with the contractor and the customer at the same time - this will stop the “he said, she said”. Put the ball in their court. You did your job. This is their mistake. Give a few suggestions, but they should be the ones who remedy this situation. At this point I would also want to be paid in full any money owed. Do not suck up any time or money for their mistake. Get a change order in writing and have them both sign it.

From contributor E:
Some of the European cabinets are going to a taller toe kick and putting drawers in. Hafele has some hardware that you can use if you use levelers.

From contributor F:
I agree with contributor D. Have another meeting. If they tell you to do what you need to without any real suggestions try raising the toe kick up 1" and put a bigger sub top on with a moulding to cover. This way you're not adding 2" to only one spot. Also, 39.5 isn't a killer either. So if you use 1" for you subtop instead of 5/8 or whatever and then add the 1" to your kick that should be close enough. Get payments due and get a change order signed with a cost of the change.

From contributor G:
We did a kitchen with 6" kicks because my partner was European and the European standard is 15 cm. On one part of the kitchen, we added a 2 or 2-1/2" molding (like a base shoe molding only much bigger) to make the cabinets seem more anchored to the floor. On the Island we left it at 6" per the customer’s request. It’s pretty easy to add some molding, change the look, and retain the kick space. You must have a kick where people are working, but under the overhung counter, make the molding stand proud like furniture. It’s also easy to do. Either way, adding molding is an easy solution. The link is to a picture and you can see where we added molding and where we left it off. 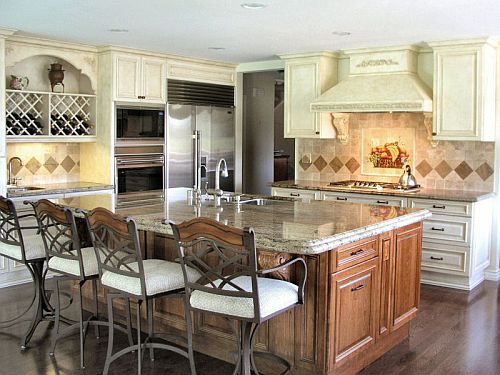