Upgrading to a Heavy-Duty Planer

Question (WOODWEB Member) :
A friend and I started a barn wood reclamation business a few years back which now includes building furniture. To make a long story short, the DeWalt planer we started on needs to get put in closet in exchange for a real planer. We're mostly planing 3"thick by 10" wide 100 year old white cedar. We're making a few table tops per week now, and will likely be doing several tops per week in the next few years. The knots are almost petrified, but the wood is fairly soft. We do miss an old imbedded rusty nail every so often for what it's worth.

We’re looking at potentially going with a 20" Powermatic with Byrd heads. We'd like to stick with single phase (budget $2500-$4000). We would like to only do this once. Does anyone have any thoughts or recommendations (manufacturer, blades, hp, etc.)? We're dreaming of a machine that eats this stuff up. Right now it's a lot of pushing, shoving, and 20 minute blade replacements.

Forum Responses
(Solid Wood Machining Forum)
From contributor X:
I bought the same planer last year and it performs very well with the Byrd head. I think the Byrd head is a good idea for your situation of hitting an occasional nail. It's a lot less expensive and easier to rotate a couple small cutters than to replace a whole 20" knife.


From contributor J:
We have the same Powermatic planer and love it. The Byrd head is well worth the extra money. You will like the planner vs the Dewalt.

From contributor F:
If you don't mind old machines and can deal with rigging a machine up with 3 phase, your budget could get you set up with a nice old machine that with a little care will outlast you. If I was buying I would look for either an older American or European machine with somewhere in the neighborhood of 7.5 - 9 hp and either an insert head or a Tersa style head. Of course I already went through the same thing you’re going through several years back. I spent $3500 on a brand spanking new 20" planer with a 5hp motor and spiral head. I had it for almost a year before I traded it for a 30 plus year old SCM 20" planer that made it look like the toy it was.

From contributor L:
In my opinion I'd buy good, used industrial machinery in a heartbeat over any of the new stuff coming down the pike. I purchased our 24" Rockwell RC63 planer from a school that liquidated it's woodshop program. This machine dates to around 1990, weighs in almost 4,000 pounds of cast iron, has a 10 hp main motor, 3 hp drive motor and a 1 hp lift motor. Three phase means those motors will run forever and very economically due to the lower amperage draw.

Made for Rockwell by SCMI in Italy, it's now almost 25 years old and will still be running another 25 years from now. I got it for $3,500 and never looked back. I still have the 15" Grizzly it replaced, and even that (from 1989) is still in use in our shop for smaller stuff (yea, the Taiwan stuff from that time period is light years above the Chinese stuff made today).

I thought I'd like to install a Byrd head on this machine (I have one on my 12" jointer and it's the ultimate), the cost for a 24" Byrd just does not justify its expense to me. The four blade head on this machine does a wonderful job, albeit much louder than a comparable Shelix head equipped machine. If I was 20 years younger, yes - I'd definitely go for the Byrd. I chose 24" width not so much for large, wide boards - but mostly so that we could pass several smaller boards (as pictured) through at the same time. Production time is reduced a lot because of this capacity. Naturally, the 9" height has also come in handy with some of the timber jobs we commission.

Bottom line - buy good, quality industrial used machines before considering lightweight new stuff. Just be sure to check them out before buying. Though in fairness to my peers, it's been my experience to find that woodworkers selling their equipment are usually honest and fair when selling to other woodworkers. We are a dying breed and share a certain level of respect. 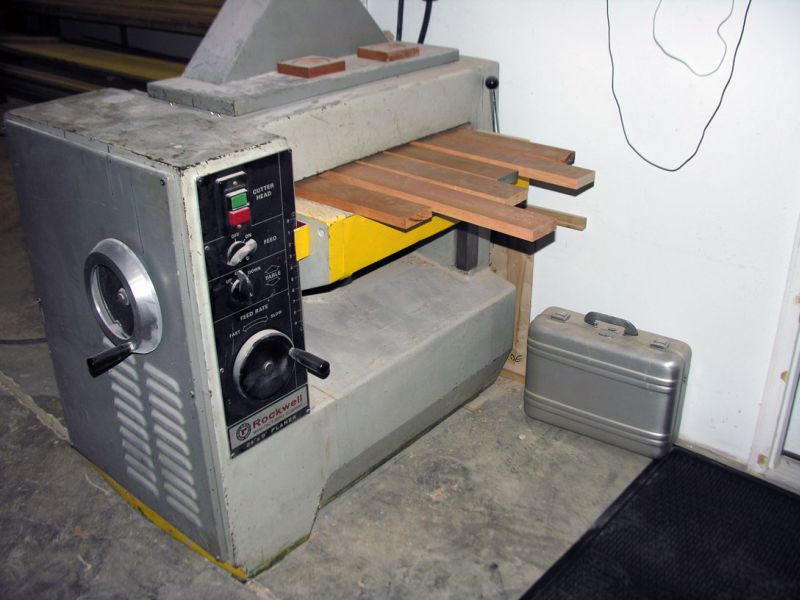