Experience says an convex mold is easier to use and more effective for veneer layups. January 19, 2012

Question
I'm about to make my first attempt at laying up radius doors (slab, no details) and from everything I see it is more common for a mold to be thickest at the center and then the layers sucked down around the outside of the form.

The doors I'm making are for a cabinet with a convex front, so the doors bulge away from the face of the cabinet. I was thinking it would be easier to make the mold so that the face of the door would be against the mold so it matches the profile I need and it doesn't matter the final thickness of the curved panel, versus making the form for the inside of the door and calculating the buildup of layers and glue.

The form I’m proposing is more like the one on the left in the picture, minus the sharp corners at the edge (it's actually a radius transition back to flat). I'm just curious if I'm asking for trouble trying to suck the material down to the center of the form like that. I have a 4x8 bag, so I have plenty of room to work with.

Any advice would be appreciated, I'm sure I'll learn plenty from this first attempt, I'm just trying to save myself from complete failure and wasting the material or damaging the back. 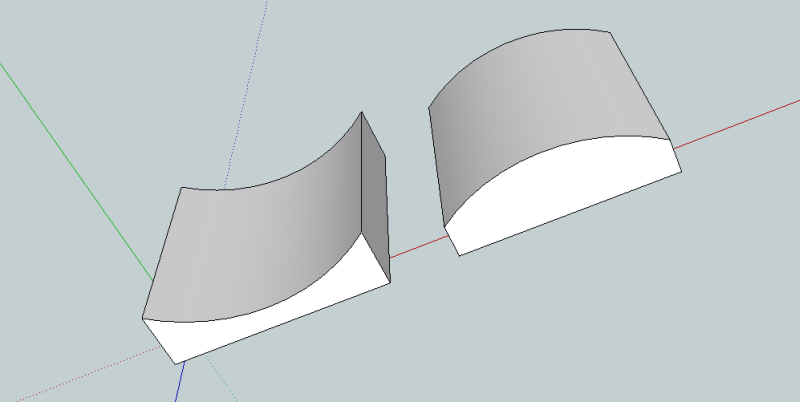 Forum Responses
(Cabinetmaking Forum)
From contributor T:
You don't need the concave form just use the convex form and put it in the bag.


From contributor K:
Convex forms work better for me - easier to hold the plies down to the form as the vacuum takes hold, and less stress on the bag as it is stretching around the form and down to the platen in a relatively smooth curve. Be sure to incorporate sufficient bracing within the form to prevent implosion from all directions. A rule of thumb I use is to space ribs 3" o.c. for one layer of 3/8" bending ply skinning the form, 6" o.c. for two layers. Be sure to wax the form well or face it with plastic laminate, same with your top caul, and ease all the corners to prevent damage to the bag. You may find you need to work with a smaller platen in order to allow the bag to stretch around the form, depending on its volume. A trial dry pressing is a good idea to see how it will work and work out any kinks.

From the original questioner:
I haven't made the forms yet, I would rather use the concave one - here's the few advantages I see:

1. It registers the shape of the face of the door, not the back which is insignificant in this case.

2. I can reuse the form using different materials if what I try first does't work, the form isn't built around a specific finished thickness of panel being created.

3. It would allow me to split the pairs of doors by using the form as a sled when I get to that point.

The wood I'm using is actually 2.6mm birch plywood - it's the thinnest sheet material I could find locally besides paper thin veneer. I figured if the 3-ply sheet doesn't bend well enough or has too much springback I can take pieces to a neighboring shop and have them widebelt the veneer off leaving me the core at around 2mm. The wood as is seems flexible enough to make the shape without much pressure so I'm hoping it works without the sanding. I plan on making the form solid particle board and covering it with some scrap laminate. That seems the simplest way for me and no chance of collapse or change in shape.


From contributor T:
You’re making this more difficult than it has to be. The jig doesn't need to be solid or two parts. Try what I said as a mock up and see if it will work for you before you spend time on something that is superfluous.

From contributor M:
Convex. As the vacuum is pulled, the middle of the veneer pack stays put, and the ends are pulled down; applying clamping force effectually from the center outwards. The concave form tends to clamp the outsides first, then presses the middle into the form. The practical upshot of the concave form is that sheer stress is built into the lamination, perhaps causing more springback, less predictability of springback, and/or form irregularity.

From contributor K:
Contributor M is right. I understand your point about indexing off the face of the panel, but I think you will find the advantages of a convex form outweigh the difficulty of making your panels a specific finished thickness, particularly if you have access to a widebelt. It would help to know the overall size and radius of your panels to offer specific advice. The tighter the radius, the more flexible the laminate and the more rigid the glue must be to avoid springback. As the panel size increases, so does the weight of the form and the material consumed in making it. For normal cabinet size panels, say 2'x3', a solid particle board form can become unwieldy rather fast, as with a bag press you have to insert the form into the bag.

For that reason and economy I generally make such forms with a baseplate of plywood or MDF stapled to ribs covered with wackywood and laminate. If the form is taller than 3" or 4" I add cross-blocking between the ribs. The height of the form at the ends need be only enough to provide fastening for the base and ribs, the lower the better if you want to use it as a sled. You can use the convex form as a sled just as well as a concave form. If built accurately, the form can serve as a template for a piloted router bit.

The 3ply you have should be fine for anything but a radical curve, in which case you could get some 2ply or sand off one face of what you have. It's a good idea to do a sample to assess springback, and it's safest though not mandatory to glue up the cores first and then the face veneer in a separate operation. That will allow you, if desired, to edgeband the panel prior to face veneering, as well as check and correct for fairness in the core glue-up. I don't think Contributor M is proposing a two piece form, just trying to decide whether to use a concave or convex form in a vacuum press.


From contributor T:
Ok, I suggest the convex shape. I would use plastic resin glue to avoid springback. The sled thing can still be done as you suggest with either a slider, CNC router, or a router and a jig possibly perpendicular to the face.

From the original questioner:
Thanks for all the input. Below is a picture of the vanity shape in plain view. The center radius is 18" and the transitions back to flat are 22" radius. The bulge is 4" off the flat face of the cabinet.

The form will take a little over one sheet of particle board to make the solid form. I plan on cutting a bunch of ribs on the CNC with a 1/2 hole in each side and using long dowels to align them. I have a 4x8 bag to make the next step easier. I have it set up with 1/4 melamine in the bag already so things just slide in and out, and some strips of thin plywood are in there holding it open like a tent. I think you guys have convinced me to make the convex form, I'm anxious to see how this turns out.


From contributor L:
I also vote for the convex form and doing the veneering in a separate operation. A core that has worked well for us is to use 1/4" plywood and widebelt one veneer off. It becomes very flexible at that point and doesn't have the kinks that bending ply usually has. You can tell the final thickness by just dry stacking and measuring. The glue better not add any measurable thickness! For very mild curves 1/8" fiber board works well for cores. Band after the core has been pressed and cut to size but before veneering.