What Do You Call That Space Behind the Hinge?

From aperture to void, woodworkers consider the appropriate term for a part of a cabinet that has no name. January 19, 2012

Question
I'm working on a new project and I just don't know the right language to use to describe the space that is kind of a "scribe", although I've heard it called that. It's not really a "reveal" in the customary sense. I would like to hear suggestions from some woodworkers. What would you call this space in one word? Calling it "the space behind the face frame" is a little cumbersome.

Forum Responses
(Cabinetmaking Forum)
From contributor Z:
The back of the faceframe, or the posterior of the frontal frame? A scribe is the part of the cabinet that meets the wall or ceiling that it butts against. A filler is usually a separate piece that acts as a scribe, but is not part of the cabinet - common in frameless cabinetry. This is just the back of the faceframe.


From the original questioner:
I was thinking "recess" already, but "hollow" and "interspace" have a nice ring to them.

From contributor L:
Less bulky. That said you have one that mounts to the back of the frame that's slender and looks good. Too bad it's too hard to get to and mount. I usually put that type on before putting the back of cabinet on or pre-drill and put on later. They also have slots for mounting and screws don't seem to sit right on them. I never understood those slots. I think three holes would have been better. I've been using the plate that screws to frame side by building a second 3/4" strip that runs the inside length of the frame and mounting to that. I've been doing this on built-ins and have not yet done it on kitchens. When doing this your shelf needs to be 3/4" narrower or needs to be notched.

From contributor F:
Internally for a variable we call it inner offset at faceframe. We don't name it in a drawing, we just dimension it.

From contributor Y:
How about "back-set"?

From contributor D:
How about the inside width of face reveal or distance to jamb (dtj)?

From the original questioner:
Personally, I'm leaning towards "IS" - Inner Scribe, to be consistent with Cabinet Vision.

From contributor T:
Scribe to me is to the wall. I vote for offset.

From contributor K:
If you were to describe the space behind the face-frame from the edge to the side panel to a customer, which do you think they would understand?

1. The recess behind the face-frame to the panel.

2. The offset behind the face-frame to the panel.

If you look up the word recess and offset, recess seems more appropriate to this application.


From contributor Y:
How about.... 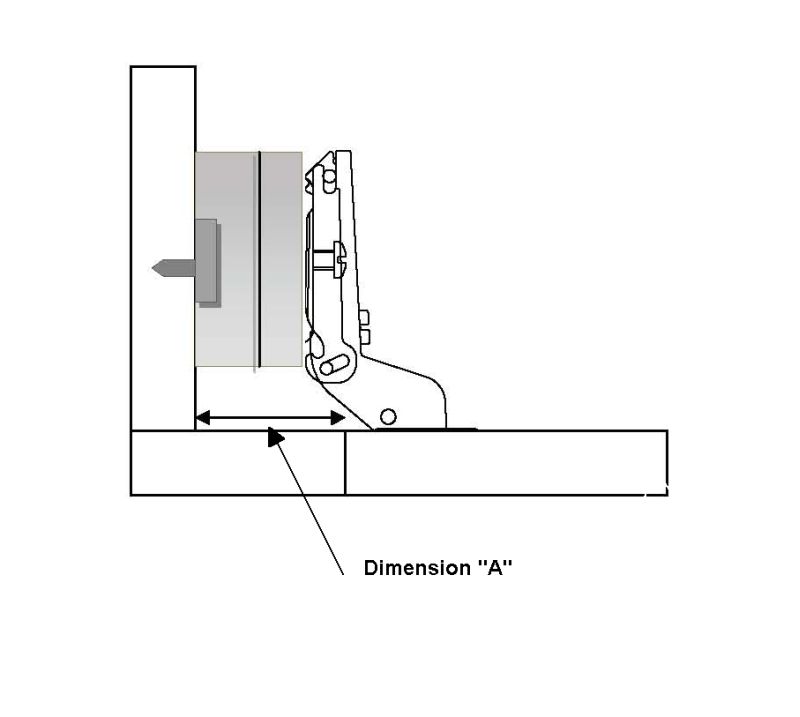 
From the original questioner:
It will also get a letter designation. Unfortunately, over here, "A" is already taken. In Salice-talk, "A" is the reveal. My vote is still with "internal scribe (IS) or interspace (IS).

Contributor K - I agree, "scribe" is out. Recess sounds good. I am beginning to think "back-space" might work too then we could give it the "BS" designation.


From contributor J:
Recess and scribe are used pretty much the same way in woodworking describing these reveals. (Save "reveal" for front placement.) Scribe's more common but recess seems more proper. I'd think only one of those words should be used but always with the identifying word interior or exterior included.

From contributor D:
In our shop that is referred to as the inner off-set.

From contributor M:
FD: Frame Difference, as in: the result of the subtraction of the side wall thickness from the face frame dimension.

From the original questioner:
Thanks everybody for the great suggestions. The votes are tallied and the winner is: (IS) interspace.

From contributor U:
Did anyone consider "faceframe overhang"?

From contributor V:
I would have thought that as it is associated with the door to a large degree that "internal reveal" would cover it.

From contributor D:
Maybe you can soften the "BS" by adding an F to make it FBS ("frame backspace"), or does that make it more controversial?

From contributor Z:
Why does "P" stand for hinge and "H" stand for plate?

From contributor J:
Don’t forget "A" for reveal and "K" for tab distance?

From contributor Z:
I think Contributor J is right. "A" should be gap. Salice even calls it "gap". The proper acronym here would therefore be "G". Since you have opted for "IS" because some software company calls it "IS" maybe you should call "K" a TAB. The rest of the hinge manufacturer world seems to call it TAB. While you are naming things, what is the justification for using two alpha-characters here when everything else is denoted with one? Not lean.

From the original questioner:
I just thought I would chime in here one more time to answer some of your questions regarding the nomenclature used and how it does not always seem to illustrate the concept intended.

I really do not know the origin of all of them however the letter "T" (door thickness) is from the German "Tur" for door. (With the dots over the U). Even though we designate the "TAB" distance with the letter "K", most of us use the word TAB in conversation.

Others substitute the term "transition" which is the same in German.


From the original questioner:
New language question: If one of your customers requested cabinetry or a furniture piece featuring coplanar sliding doors; would you know what they were requesting you to build?

From the original questioner:
To contributor U: We're getting there: "Coplanar": Occupying or lying in the same plane. Reference to furniture design: Two coplanar doors that slide and indeed "bypass" each another. How is this accomplished? Here is an design example:


From the original questioner:
For any of you still wondering about the letter designations in our engineering drawings, here are a couple of explanations: "L" = gap behind the door - between the door and the cabinet.

German origin:
Luft (Air) or
Lucke (Gap)
"A" = reveal or the portion of the cabinet side not covered by the door.

No one seems to know where "K" (TAB) originates. It goes too far back in history.