If you want the muscle to move logs, you should look at hydraulic winches, not electric. Read on for other skidding advice. July 3, 2008

Question
I am currently using my 3/4 ton 4x4 to skid logs to my trailer for loading. It works fine for the relatively small logs I'm working with (usually 8 or 10 feet long and 16 to 24 inch diameter). The problem is when it gets as sloppy as it is now in PA. The truck and logs make more of a mess than I'd like. I have been considering an electric winch mounted to my truck to pull the logs. In most cases I'm only skidding the logs 50 to 100 feet until I get them to the edge of the road. What capacity winch should I be looking at to efficiently move logs of this size? Also, can a 12 volt winch be run off a separate fully charged battery, or should it be run off the battery in my truck which is hooked to the charging system?

Forum Responses
(Sawing and Drying Forum)
From contributor L:
An electric winch for extended heavy duty use? If you bought the best you could afford, it should hold up for awhile. It will have to run off a battery that is being charged at the same time. Even then a person would have to be careful not to burn it up. I would be tempted to investigate a hydraulic winch, which will cost about the same as a HD electric. Another option might be using an older truck that you could find a PTO for. A PTO 8 -10 thousand pound winch can be worked all day long without fear of burning something up.


From contributor R:
Electric winches are not the answer as a long term solution. They can do the job, but they will not hold up to constant use, will draw a stand alone battery down very quickly, and are very, very slow.

From contributor H:
I get 100' of cable and tie loops along the line were I could pull from the road, back up, and put the loop on the trailer ball until the log is skidded out to where you want it.

From contributor M:
Another option is to use a Bull line and a block and tackle with your truck. This setup is much less expensive to get started but assumes you have a straight line of pull. If you do not have a straight line of pull, then you will need to rig a dead man. If you are not comfortable working with line, go with a hydraulic winch - do not mess with an electric.

From contributor S:
I used to own a diesel Land Cruiser (classic Jeep style) with an 8000 lb Warn Winch on the front. Used it lots to load logs on the mill - loop the cable around the log and winch it up some 6x6 ramps - and some logging in the bush. Like has already been said - slow. But it works, and if you have only a few logs to do at a time, it would be okay. There are aids you can get to make it more productive. Auto-release pulleys to attach to trees along the path so it doesn't catch on standing trees, sleds to put over the butt of the log so it doesn't dig in, etc.

I like the idea of a PTO winch, but when I looked into them, they were not cheap. If I were to do it again I would go hydraulic for sure - they sell the winches that can attach to a hydraulic power pack just like they use for snowplows. Of course, I always found that the truck could pull three times what the winch could easily!


From contributor T:
It is not safe to use the hitch ball as an anchor point for any rigging. The bolt or screw is not strong enough. Sure, people have done this for a long time. On the other hand, people have done it once and broken off the ball, sending the whole works flying through the air. Better to anchor to the frame or some solid point.

From the original questioner:
Thanks for the input. Taking the time to post my question has surely saved me the frustration of purchasing something I would have been disappointed with in the end.

From contributor J:
Go to the wreckin' yard. Some of the old trucks have the PTO and even the winch setup. I have an 11hp hydraulic power unit that is Honda driven. It runs about $1200. You could couple it to a hydraulic powered winch. Google lowbed parts... They use the power units to run the lowbed rams.

Please don't put the winch cable on the ball of the truck. My buddy has a permanent scar on his face from a windshield that caught the hook that slipped off the ball. Be careful with tensioned wire, rope, and the like.


From contributor S:
Have you considered using a logging arch? There is a discussion of these in the Knowledge Base. Also, search Google images for many examples and links to people doing logging on the cheap.

From contributor H:
With my method of skidding,, when the cable breaks (which it will), you can tie the cable back together and it's not wasted like if it had to go on a spool like on a winch. Also use a chain as a choker on the log and loop the chain through the cable so that the hook out cut the cable. Also loop the chain so that it will tighten onto the log as the log gets skidded. A Reese hitch is what I used for hooking and pulling the big logs with my 6000 lb 3/4 ton 4X4 truck with a 300 hp motor.

From contributor L:
There are cables and then there are cables made for logging. I've been using 8-12 1000 pound winches since I was 16. Taking my shoes off so that I can count that high, I figger that's about 56 years. The only time I've ever had a cable break was due to being careless (ignoring a cable with broken strands). If someone is going to be yanking logs with a wimpy pickup, go to any place that sells choker cables for loggers and have a 1/2 or larger cable made up. You won't break the cable... You might bend the frame, though.

From contributor B:
I have a 9000# electric on this. I know it's overkill, but went that big to get more cable. I can drag a tree 75' and load it on the trailer with one battery. I have 1 battery mounted between frame and axles, not hooked up to any charging system. Have not needed a second battery. I also think a hydraulic winch would be a million times better if available. The electric will get hot after a minute or two and will have to cool off. I think a hydraulic could run all day. 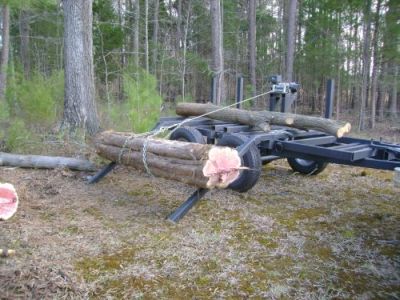 From contributor C:
As a former tow truck operator, I also have seen the aftermath of using the ball of a truck as a hook point. Not very pretty. Anyway, a hydraulic winch is definitely the way to go. The winches that we always used that tended to be the most reliable were made by Ramsey.