Question
I had a pleasant discussion with a friend the other day about the real meaning of the terms muntins, mullions, bars and rails. I have a good deal of respect for this individual's intellectual knowledge of woodworking, but am curious how others define these items. When I told him I thought I'd write this post he thought it was a great idea. He wanted to know if others agreed with his definitions.

I've been one of those that will describe the divider bars in windows as "muntins or mullions or whatever!" For years I've also referred to the vertical dividers that separate side by side panels as "vertical stiles." I've always known that I was probably wrong in making these references but never put out any effort to become more accurate. So, here are my friend's definitions, in my words. Do you agree?

Mullion: a vertical space separating two architectural units such as a stud pocket between an entry door and a sidelight. Not the divider bars between window panes.

Rail: a horizontal component separating glass panes that goes between a pair of stiles just like the top, bottom and/or intermediate rails on a door. To be a rail, the part must cross the entire width of the opening in one unbroken piece.

Bar: a component separating glass panes that goes either horizontally between a pair of stiles (another name for "rail") or vertically between a pair of rails in a door or window frame. In effect, if the part goes horizontally all the way across the opening it can be called a "rail" or a "bar," but if these primary unbroken components do the same thing vertically, then they are a "bar."

Bar rail: totally unrelated to the above but clearly preferred by many at the end of a long hard day.

Muntin: The shorter pane divider components that do not go all the way across the opening in one piece, but rather go only between the bars, rails or frame in short segments.

Forum Responses
(Architectural Woodworking Forum)
From contributor H:
I agree with your friend.


From contributor T:
If there's a bet riding on it, then you need an arbiter. In my opinion, that arbiter should be the AWI manual, since they set the standards for all specified jobs.

Their definition of mullion: an upright *or vertical* member between panels. Similar to a cross rail in the way it is fit and machined.

Bar: A rabbeted moulding which extends the total height *or* width of the glass opening in a door.

Muntin: A short bar, either horizontal *or* vertical, extending from a full bar to a stile, rail, or another bar.

He defines several specific types of rails, all of them horizontal members that cross an entire door from stile to stile, and all of them surrounding panels (not glass).

Mullion: A member that joins wall openings such as doors, windows or cased openings (i.e. the vertical casing that bridges the jambs of two windows set close together is a "casing mullion").

From contributor D:
I agree that while there are geographical differences in the terminology and applications, the diversity of definition arises mostly from the lack of continuity and formal education in our chosen profession. The shops I trained in were more than lax in linguistic accuracy, and "that thing" or "the stick" or "them sticks" sufficed for communication and de facto training. To ask for spelling or definitions would have caused such distrust as to seriously compromise one's ability to advance in such an environment.

Our shop today relies more on drawings with dimensions than names, and mostly discriminates between verticals and horizontals. We use the verb "mulled" more for joining sidelight frames to door frames than we use the noun "mull" to describe same. And "rail" is always horizontal, and more massive than a muntin, and can divide glass panels, glass from wood panels, or wood from wood panels.

I carry a short piece of coped and stuck muntin bar to all the machinery shows - have for years. When a salesman approaches, I show the part, and ask how we can make the cope cut after the sides are profiled. He usually tapers off quickly and moves on to more likely prospects, but not after I try to get him to name the part. The regional names abound, and indeed, most people don't even know what they are looking at.


From contributor U:
Good question. I’ve always followed Cecil Hewett’s definitions, although if you learn one thing in this trade it’s that nothing should be considered definitive! “Astragel” is another term that can mean different things to different people.

But on this specific issue, Hewett defines:
Mullion – Vertical components of windows, placed in the void.
Muntin – Vertical members of paneled areas; the term may derive from mountants.

The generally accepted use of "mullion" describes the vertical section that separates the two voids (the space before the windows are fitted) where two casements are placed side by side, or say, the vertical section(s) that separate the three parts of a combination sash (sometimes called a Venetian sash, although that can itself differ in detail) which will comprise part of the single window. Originally, of course, a mullion was the vertical post in what was originally just an unglazed opening in the wall to let in light, so the term pre-dates glass and windows as we think of them.

Although I’ve heard "muntin" used in the way you describe (and I’m talking about the UK here), to me it’s always been the vertical bit between panels in, say, a cross-passage screen (referred to as panel and muntin), or wall paneling around a room (wainscoting).

Jackson & Day in the glossary of their “Period Homes” book say:
Muntin - A vertical member between panels (e.g. of a door or wall paneling). Or another term for glazing bar (US).

As for “bar” and “rail”, take your pick. I always have to ask the person I’m talking to if we’re referring to the same thing, just to make sure. My understanding of it is that a rail runs horizontally, a bar vertically, as in railway tracks and prison bars, which is how it was first described to me.

Then in half-timbered houses you have posts and beams, which were explained to me as fence posts are fixed vertically and a torch beam shines horizontally.


From contributor J:
On a less erudite level, I once worked for a guy who called the dividers between panes of glass "mutton bars," which made me think he was describing a fence to restrain sheep, or perhaps a drying rack for lamb jerky...

From contributor U:
Oh, and that reference to "astragels" should really also have included the fact that not only does the term mean different things to different people, it can also be spelled differently - either with a soft G as "astragel" or with a hard G as "astragal." And just to confuse it further, some UPVC guys use the term "astrical" bars to describe the stuck on duplex bars on double-glazed units.

From contributor P:
As defined in "Modern Carpentry", by Willis H. Wagner, first published in 1969:

Mullion: "A slender bar or pier forming a division between units of windows, screens, or similar frames - generally nonstructural."

Rail: "Cross or horizontal members of the framework of a sash, door, blind or other assembly."

Stile: "The upright or vertical outside pieces of a sash, door, blind or screen."

Bar: Not defined in the glossary of terms. But "sashbars" are mentioned in the muntin definition below.

Bar rail: Something to lean on when having a beer.

Muntin: 1. "Vertical member between two panels of the same piece of panel work." 2. "The vertical and horizontal sashbars separating the different panes of glass in a window." 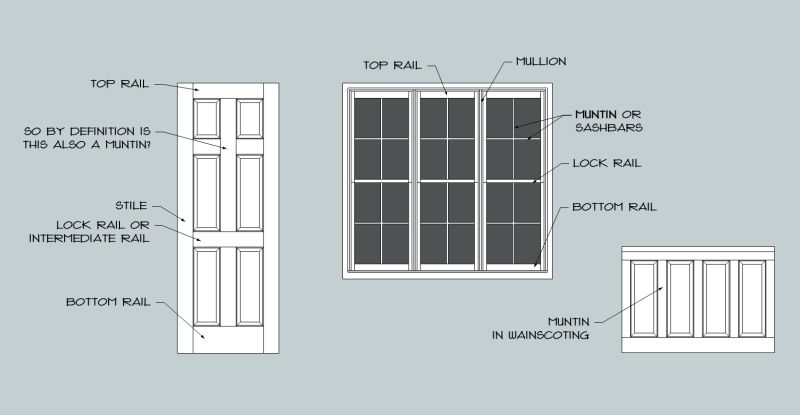 
From contributor U:
That's got us in a bit deeper! The drawings make things simpler to refer to - many thanks. Your sash bars are (almost) universally referred to over here as "glazing bars" and defined further as either vertical or horizontal, which makes for an easier life. The "lock rail" is, again almost universally, referred to as the "meeting rail." As for door terminology, one term that is long gone is the "harr durn," or just "harr," which is the door stile to which the hinge is attached.

Bringing it all together, Hewett, talking about Tolleshunt D'Arcy church in Essex (p205), "where flat planks were contrasted with the moulded v-sectioned muntins and edge framing. The highly contoured plank surfaces from Fobbing church were designed to produce an interesting surface that did not require the addition of any further items, such as muntins; and it was from this type that the more restrained 'creased' doors of the Elizabethan period were evolved."
...
"The iron hinges on the Fobbing door are of an earlier date and were designed for a flat surface, and the vertically moulded type of door gave rise to a change in hinging, the ironwork being redesigned so as to fasten to the rear face of the harr durn."


From Gary Katz, forum technical advisor:
What a great conversation. I've always agreed with the mullion as back-to-back jambs or trim on those jambs; and muntins just as they've been described - separating TDL glass (now they just install muntin grids). But I've never seen "field" stiles in wainscoting referred to as muntins. That would mean any stile on a cabinet face frame, which doesn't run from top to bottom on the frame, would also be a muntin? That's a little strange for me.

From Gary Katz, forum technical advisor:
But I like it! How else do you describe those short stiles?

From contributor P:
Well, I mislabeled the "meeting rail/check rail" on the double hung sash. It is not called a lock rail here. So I've corrected the drawing. Thank you for your insights into the history of some of the other things. 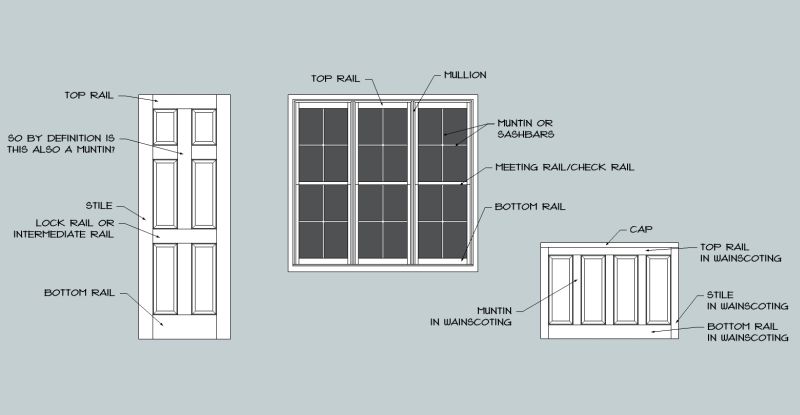 
From Gary Katz, forum technical advisor:
What program did you do that drawing in? Is that Sketchup? What's that font? It's great.

From contributor P:
The program is indeed Sketchup, and the font is "Handsf Single" a truetype font.

From contributor I:
We produce a moulding that would most likely be described as a "mullion"; it is typically 1 1/4" wide X 3/8" thick with a 1/4" rad on both edges. This piece is used to trim between a front entrance door and a sidelight. Many in our area refer to this moulding as a "burlap"; have you heard of this term?

From contributor U:
Another fascinating insight into the vagaries of terminology. To me "burlap" has always meant a coarse woven cloth. I wonder what the roots of the word are as used in your area? The only other cloth-related term I can think of is "linenfold," which is virtually self-explanatory when you look at it. But burlap? There's bur-walnut and bur-elm, describing the wavy-knotted cross-section of such woods, which when highly polished, gives that beautifully textured surface on cabinets...

From the original questioner:
"Burlap" is a new one on me. I always called that a "mull strip."

From contributor E:
One little refinement to the Sketchup. I was taught to call the bottom rail of double hung sash a sill rail.

From contributor Y:
I have always known the top and bottom rails of a door as the "head rail" and "kick rail."

From contributor W:
But what about transoms - or have I missed that bit?