Once again, the wood detectives try to identify some boards from pictures. Elm, Hickory, and Ash are the likely suspects. February 15, 2009

Question
I picked up a few feet of this wood at a sale but I'm not 100% sure what it is. I have a small sawmill so I've cut a lot of wood but haven't run across this stuff yet. The wood is all dried and as hard as white oak. It also is about the same weight as white oak. I ran some through my planer and took a couple of pictures. I think it might be elm. There was no owner at the sale to ask. 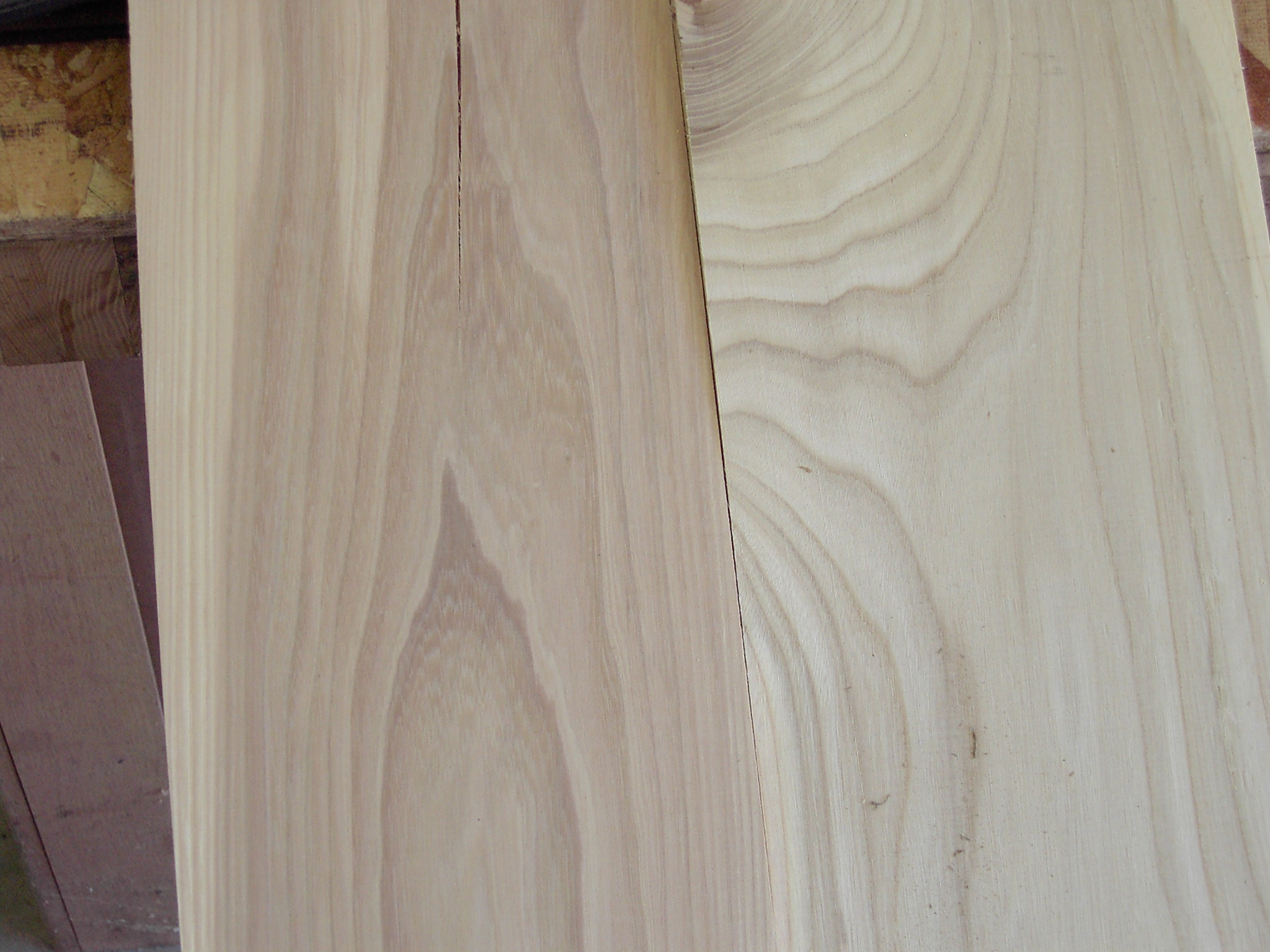 Forum Responses
(Sawing and Drying Forum)
From contributor U:
That’s elm alright. I'm pretty certain. It looks to be Siberian elm. It’s a nice wood to work with and machines nicely. It’s really pretty when finished, though a bit on the soft side.


From the original questioner:
That's what I thought, but it doesn't seem to be very soft. It is harder than the soft maple, cherry, or walnut. I’ve worked with in my shop. I have about 3,000 board feet of the stuff.

From the original questioner:
The one on the left is darker but it isn't ash, this board was cut more to the center of the log. The right one was an outside cut with sapwood before I planed it down. The camera didn't take as good a picture of the grain in the wood as I would of liked. Both boards are the same wood. There was some bark on the right board before I removed it. Not hickory - looked more like maple. Here is another view of the same boards. 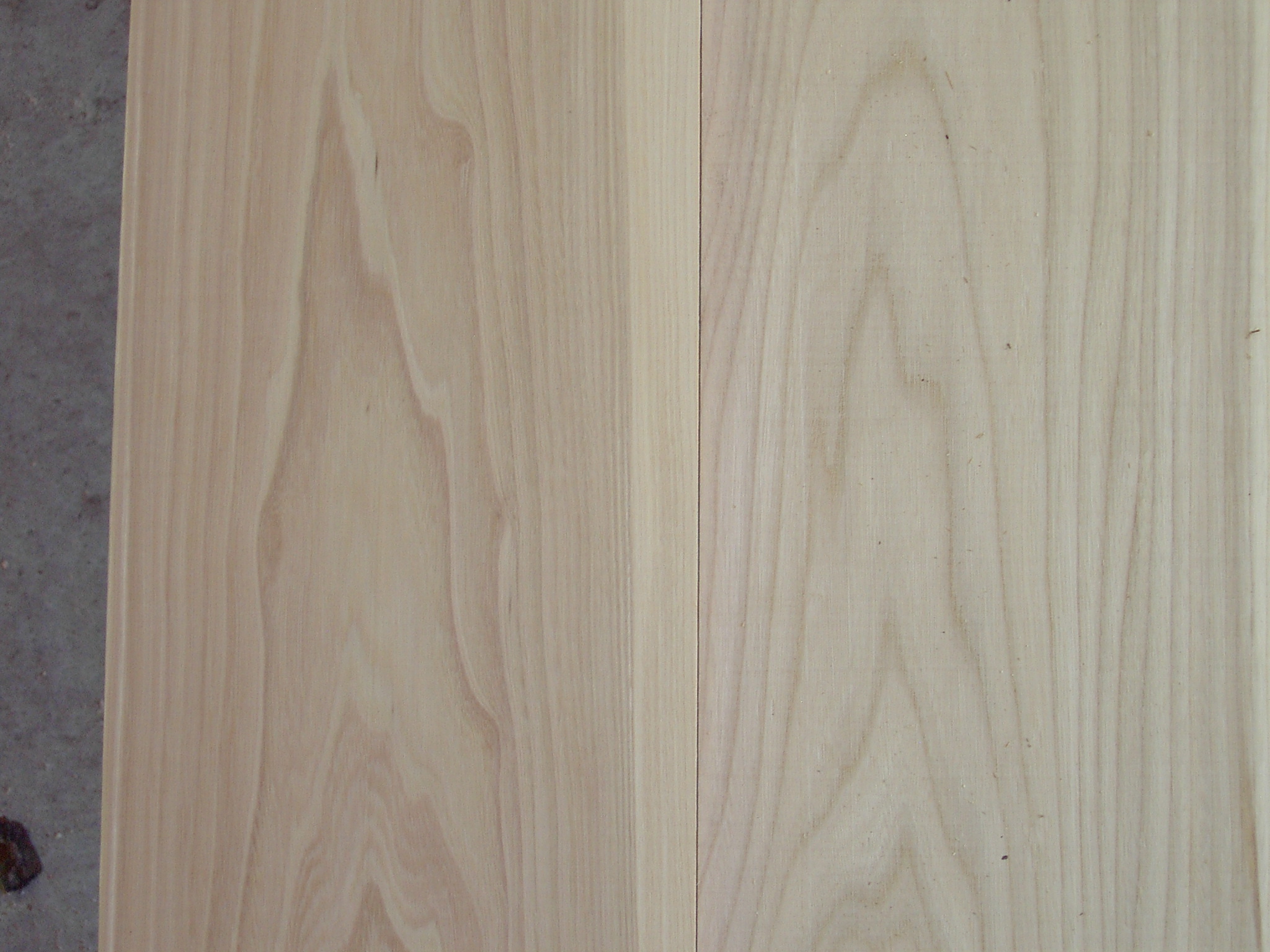 
From contributor W:
I have some Siberian elm that looks just like that. So that is my guess.

From contributor J:
I don't see any worm track to help with the ash theory. Maybe it's elm. Is the heartwood pink? Any chance it's honeylocust? That might help explain it being very hard.

From the original questioner:
No pink in the center, and it’s not ash. I've had honeylucust so I know it's not that. I'm pretty sure it is elm.

From contributor L:
What does it smell like? A cinnamon-like smell in fresh dust usually confirms elm.

From contributor D:
Elm! Elm has the little chevron repeating grain thing when plainsawn. I am not talking about the cathedrals of the spring wood/summer wood lines but the little 1/16" chevrons in the smooth grain portions. I am pretty sure that is one kind of elm or another.

From contributor S:
It looks like hickory to me.

From the original questioner:
The grain does have that chevron grain look to it. This wood has been in this building for 25 years or more so I'm wondering if it is American elm.

From contributor D:
It sure looks like elm to me when I blow the picture up and look for those little squiggles. I have some American elm here. Every now and again there is a tree in the middle of a stand here in Indiana but they are so rare very few know what the wood looks like.

From contributor L:
Look at the end grain of the red elm below. It’s the best way to tell to put this to rest.


From contributor E:
It's in the elm family. It may be hackberry.

From contributor Y:
I turned some hackberry this week - it didn't look like that.

From contributor H:
Contributor L's picture is excellent! It clearly shows the wavy bands of latewood pores. That is so distinctive of the elm family, including hackberry and sugarberry, so that no other woods display this trait to the extent that the elm family does. It should be a dead give-away if what you have is elm.

From the original questioner:
Here is a picture of the end grain - not the best. This was the second attempt and it isn't that good either, but maybe it will help. 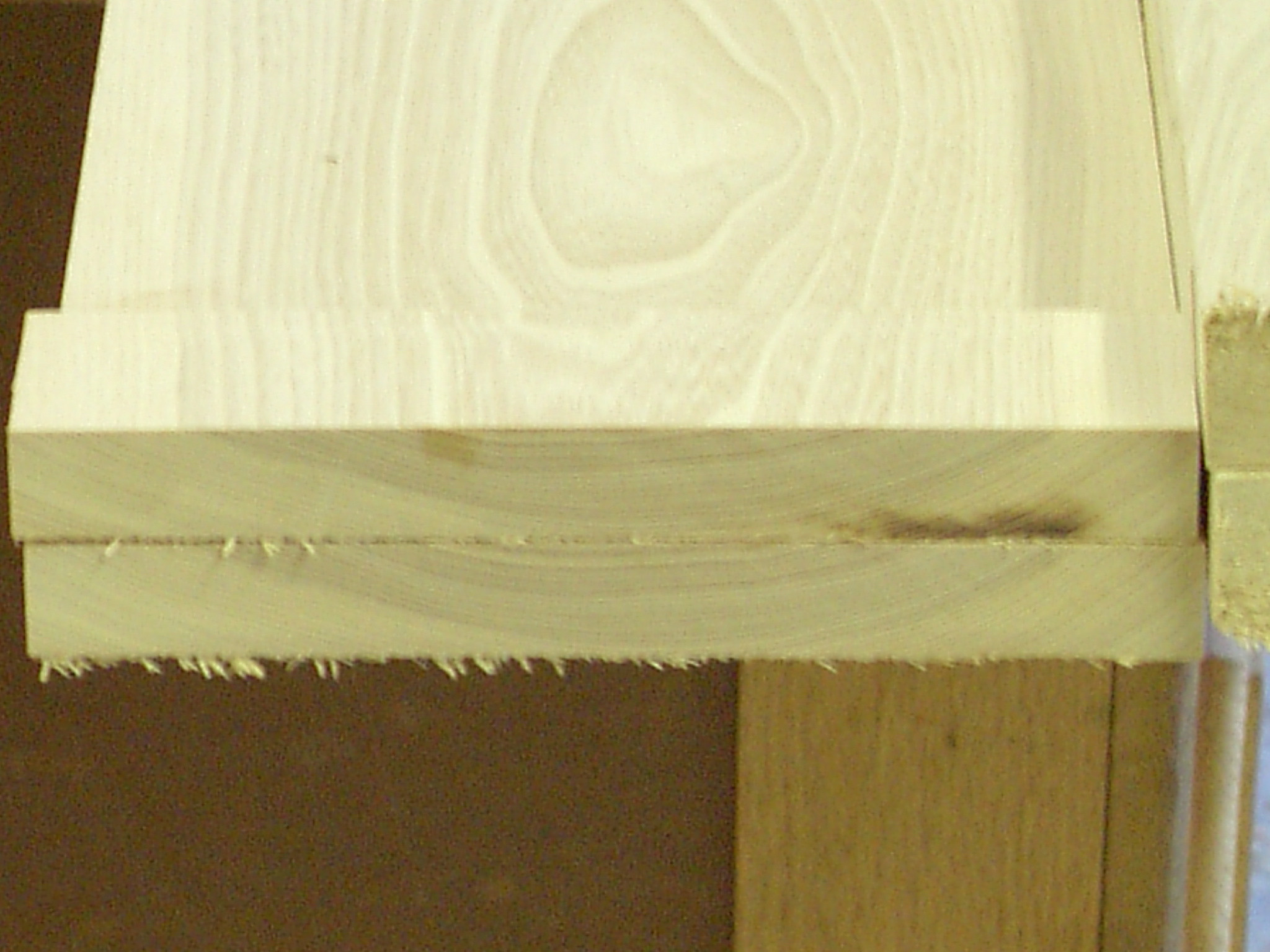 
From Gene Wengert, forum technical advisor:
The picture sure looks like hickory to me.

From the original questioner:
I would have guessed it as hickory as well if the bark I cut off wouldn't of been so smooth. It’s more like mature sugar maple.

From contributor R:
It may be from one of the pecan hickories then.

From contributor G:
I'm not a wood ID expert, but I'm happy to pass along images I've found on WOODWEB. This is elm. 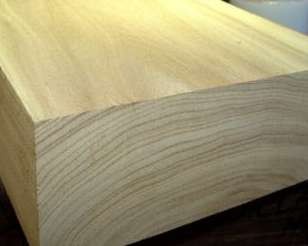 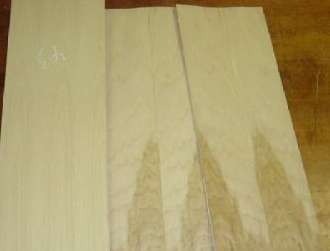 From contributor W:
You will have to take a razor blade and make a clean slice on the end grain. If there are no wavy bands in the latewood, I also think that it is hickory.

From contributor L:
Try this. Sand the boards and see what it smells like? If it smells the slightest bit like cinnamon, it is elm. You may have to have someone with a fresh nose help you. Anytime I tried to show that to someone that smoked cigarettes they couldn't pick up the cinnamon scent. Another trick is to where a canister/cartridge respirator for 15-20 minutes (not a dust mask). Before you take it off sand away where no other wood is being cut or sanded. When you finally expose your nose to the freshly sanded wood and dust you will truly smell the aroma of that wood. The respirator neutralizes your olfactory senses and you will never forget that smell.

From the original questioner:
The board on the left is hickory but not the same kind I have as I compared it to a couple of boards I cut myself. The one on the right is elm, end grain ID worked. The end grain picture I posted was the hickory (turned out better).