Beautiful and easy to work, ash also ages well. Fans discuss ash and its virtues in this thread from the Architectural Woodworking forum. November 9, 2005

Question
In 14 years as a woodworker, I’ve never had the opportunity to work with Ash, and I have a few questions. Is there a substitute wood that can be used for the face frames and doors like birch is used to substitute for cherry? Are there any characteristics about the wood I should know about when it comes to the finishing? By the way, this is Ash right? I feel like a rookie for having to ask. 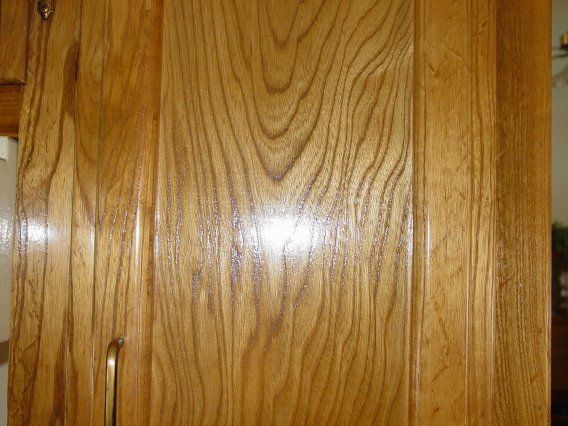 Forum Responses
(Architectural Woodworking Forum)
From contributor A:
I love working with ash! Milling, finishing, carving, turning, but I have found that the finished ply is more expensive than oak. Beware of beetles, but not the rock group. I think Dr. Gene gave some insight into ash once somewhere.

From contributor B:
Ash is very open grained, so you can use grain filler or paste. It is a very beautiful wood that will never be mistaken for Formica or Wilson Art.

From contributor C:
The only wood I've ever worked with that could resemble ash is Catalpa. Both are beautiful woods in my opinion. I treat ash as I would red oak.

From contributor D:
It's hard to tell from the picture, but at first glance I wondered if the main piece was elm.

From contributor E:
At first glance, I thought the panel might be elm because of the little zig-zag lines between the early wood rings, but when you look at the marks on the right style, those little worm looking trails are caused by a beetle in the bark which allows the new cells in the cambium to fill the void where they excavated. This is a trait common to ash. They were present while the tree was still growing without hurting the tree.

From contributor F:
Ash can be a bit chippy when planing, so watch your grain directions. It can also be splotchy when staining, but I haven't run into this very often. I've always considered it a relatively similar in grain appearance to red oak; jut more finely detailed and elegant looking. Over the years I've built dozens of kitchens out of many different species for customers. I built my own out of ash.

From contributor G:
I think you have a mix of Elm and Ash, but it’s hard to tell from the pictures. Why are you looking for a substitute? Ash is a very easy wood to work. I personally hate to mix species of wood when they are on exposed surfaces together. I have never seen Birch look like anything but Birch no matter how well it is finished.

From contributor H:
Ash is generally much cheaper than oak or cherry, so I don't know why you would want to substitute. One other thing - the solids come in two colors, frequently mixed in one board. There is the creamy yellow and a deeper brown. If you do a natural finish, the brown will fade out after 4-5 years and you get the nice patina seen in your photos. When you buy ash ply, there is almost never any brown, so mixing solids and plys can be a problem unless you stain. Ash stains well, but then it just looks like oak. In my opinion, there is nothing like a nice patinized ash (10 years old or more) and 100 year old natural ash is a beautiful thing.

From contributor I:
As far as the substitute question, I'm not looking for a substitute, just information about the wood itself. Some woods can be subbed for others and I was curious if Ash had a suitable substitute.

From contributor J:
It sure looks like elm. If you can get a 10x magnifier, look at a clean cut of the end grain. You will probably see ulmiform pores (wavy bands of latewood pores) that make the feathery grain appearance. We find it a bit tougher to work and finish than ash. Sometimes raised fibers are a bit of a problem when finishing, and they must be scraped or sanded smooth.