Anyone have any experience with taping the end grain on solid wood? builder saying his painters never fill the endgrain good enough.

Should be easy to fill the end grain with a brush.

If they are spraying on site then they need to prime better or with a higher solids primer.

Orrrrr..... You need to sand the end grain of the doors better. I use an edge sander and that closes the grain very well.

Taping the end grain? You mean edgebanding? Why don't you just use some high fill primer on the top and bottom of the door and back charge the builder.

We use use a shelix head on shaper and then clean up on edgesander. one of the problem's is we are in texas very high humidity and we install the cabinet's and they are left sitting unfinished in the houses to long. we are using Beech lumber.

I'm in Texas.
Your builder needs a different painter if they're edge sanded.
Get them under a high solids primer at least until they paint.

Taping is a bad idea. It sounds more like a painter's problem than your problem, although the builder wants it to be someone else's problem other than his problem, which is why you are hearing about it at all.

If you need to do something about, you might consider a glue size on the end grain, letting it dry before final sanding. But this may come back to bite you if the paint doesn't stick.

Better to stand your ground and tell the builder that you are supplying cabinets sanded and ready to paint, and that painters are responsible for the finish quality after that.

That is the definition of finish-ready, which sounds as though that is the extent of your responsibility.

Unless you want to paint them. Or miter the corners of the doors for a small fee, which is also a bad idea. If you are living up to your contract, then your end is done.

Slather the end grain with putty before you edge sand them. Best you can do for the builder until he gets painters that will take the time to do it correctly.

Mitered doors as Tony mentioned are another way to do it. I personally don't do mitered doors, only cope and stick.

Is it the end grain porosity, or is it the cope/stick joint telegraphing through?

I only ask because you mention environmental factors and time delay before paint. The delay can definitely cause enough dimensional change in the rails to undo the nice flush edge from the sander.

cope and stick joint is the problem.

If the cope and stick joint is the "problem" then it's not a problem. It's what wood does. And there isn't a thing you can do about it if you continue to use that type of joint.

Bad idea on all counts. The builder's inability to control his painters is not your problem, tho he would like you to take it on for him.

Upgrade your end grain sanding so he has nothing for the painters to complain about.

In my experience, solving the builder's problems should happen with superior products and service. Not with gimmics and jimcrack.

What kind of wood are you using? bamboo?
You sand a door on the edge sander like everyone has mentioned , your job is done. If the painter can’t make it look good after that, he needs a new painter.

I would tell him to get a bag of sand and a hammer, dump the sand on the ground and start pounding it.

We are using beech, we outsorce some doors from time to time we used a local repitable shop that make a lot of doors and same results.. i will try to post some picture's 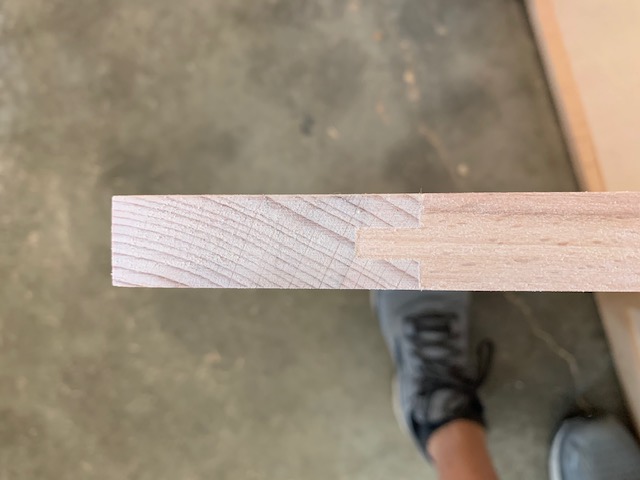 Rodney,
How are you cutting or sizing your doors?
The picture you posted, to me there appears to be tear out, or at least that’s what it looks like to me.
I would maybe try making your doors a little long and cut them down to size on a sliding table saw if you have one.
You could put a coat of filler on before you edge sand, maybe something quick drying. I am not a fan of edge banding solid wood, especially the end grain like that, all your movement in your wood is parallel to your edge tape.

I agree with Scott, it appears that there is tearout on the rail component, almost as though the rails were left alone after machining, where some tearout occured, and the stiles were flush trimmed to the rails, with none of the rail being removed in the process.

The result appears such that while having been sanded, it is not necessarily smooth, as any paint would not fill those tearout areas, and they would stand out once everything was the same color.

As Scott mentions, you may consider making the doors a bit larger in all directions, and trim the doors on a panel saw, or a table saw with a sled, such that the excess stile and a bit of the rail are sawn off, and then sand the edge smooth after that.

We run all edge's with a shelix cutter head and then edgesand with 120 grit.

From the picture you posted, you've still got some end grain edge sanding to do.
I build doors 1/4" oversize, trim 1/8" off all sides on panel saw, then edge sand with 80 grit on four all four edges.
After that, it's on the finisher.