What CAD software are you using?

I just wanted to make a thread asking everyone, what cad software are you using? and are you happy with it?

Autocad, 2016 and 2017 to be specific. It is the industry standard. Yes it is expensive but if you are looking at going into commercial work you will not have issues with files you receive. I have tried numerous other CAD packages but always come back to Autocad for production work. Get a subscription and get the new version every year, learn and move on to another challenge,

I also use auto cad, 2d only. I'm struggling my way through teaching myself how to use it. I'm good enough to make shop drawings for us to work off but not good enough to submit those drawings to customers/architects/designers. Do you (anyone) have a good source for learning the program?

For 2d we started using Dassault Systems software. It is free for a sand alone license. A professional license is $99.

It is virtually identical in function to Autocad Lt.

If you already have AutoCAD and just want to do quality shop drawings to submit to the architect I would suggest taking a look at
JMH Software Quick Draw for millwork.
It's AutoCAD based and reasonably priced.
I think it has a free trial period also.
No 3D stuff but I've used it for years for my submitted shop drawings.

We use mostly AutoCad and some Inventor.

In AutoCad everything is drawn in 3d. From one assembly we can create our shop and presentation drawings. Also extrude individual part information using Smartlister. Parts are then processed for Cam using Solid-Cim.

For Inventor the end result is similar to AutoCad, yet assemblies can be parametric. We have the add-on to extract part information and handle some other things woodworkers need. Solid-Sim is used to export the part for our cam software.

In time I see us moving more into Inventor.

I've been using CAD/CAM software for a high-end custom millwork shop here on Long Island for many years. I have used AlphaCAM, ArtCAM, Microvellum 15 and 16, AutoCAD, Cabinet Vision, Inventor, and Autodesk Fusion 360 just to name a few. Depending on the situation for 1 job I could use 3 different programs. For example, I could draw a nice presentation drawing for an architect with AutoCAD, get approval; 3D model the kitchen in Microvellum for CNC ready parts and project elevations/sections/plans of individual cabinets for assembly drawings. Anything custom or strange that is giving me a hard time 3d modeling in Microvellum (Which is almost nothing cause you can import any 3d Model and convert it into a product) I do in AlphaCAM. I will say setting up Microvellum and getting it working for your particular build style is no easy task. But once you get it and understand the spreadsheet formulas that drive the program/cabinetry you are golden. As for any 1 off 3d modeling with complex geometry I don't feel comfortable using AlphaCAM or it's giving me a hard time importing the model for whatever reason I use Autodesk Fusion 360. I highly recommend that program for anybody who is getting into CNC/3D CAD for mechanical components. I would advise highly against using a modeling program like Fusion 360, Inventor, Solidworks to do any custom millwork. Getting these programs to nest parts/coherent bill of materials/manipulating custom components takes a ton of work to set up and just simply is not worth it. Hope everyone has a happy New Year!

I use Routercad with Autocabinets.You tell it how you build cabinets and material and it outputs G-code, dovetailed drawer parts,cut sheets and just about anything else you can think of.
Ben
Ben's Millwork

This software is simple but free and export is posible to OBJ file. 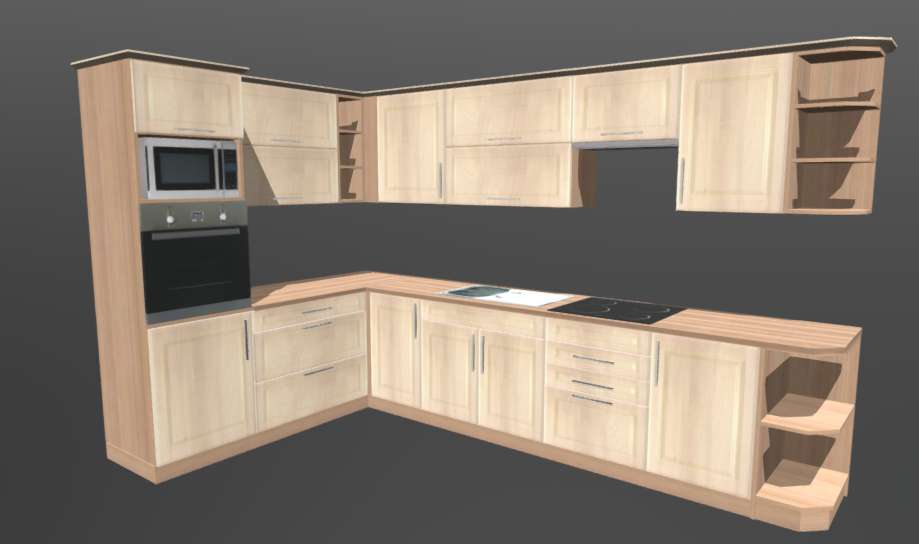 We are using Autodesk Inventor, it is one of the finest CAD platforms to meet end goals at design as well as production stage.

Inventor makes the drawing process for wood furniture simpler and more powerful by allowing easy change of dimensions and sketches.
It also automates repetitive tasks by reducing the time taken to generate specifications by 50%.

The inventor has many benefits to the woodworking industry. Here you can find them.

The only reason inventor works at all for this industry is because if the equation assistant. That was originally developed for Mechanical Desktop. There was a guy writing code for inventor a while back that made what I would call the perfect parametric approach. All the code was there to see as it ran, so you could change any of it on the fly as needed. That part awesome.

However, few to none that know what to do with all of that, work making cabinets and millwork.

It also lacks constraint free automated parametrics. e.g. true design/build. Autodesk's view stated in a white paper issued by a person that was on the Maya team and one of the vp's, was that the word "design" in design/build was designing the mathematical formulas to drive your parts. I could go on with more, but that is enough to show how they didn't get that people working as "detailers" who have the job of beating the devil out of the details and who's job title is really better discribed as, excorcist", do not get paid anywhere near enough to compensate them for having such an expensive education. They have this all wrong, in my opinion, for a while now. I don't trust my future to their viewpoint on what, overall, to do math kernel. Regardless. The person that wrote the code for woodworking in inventor did get that end correct. I don't know what happened with that. I didn't see it the last time I searched.

Hey, I don't want to overload the comments, but it's been slow here on these boards for a while so I figured I'd give it a go.

All of those rockets they're building right now with all those tech jobs, they are doing because the human race made the definitive discovery of vast amounts of water ice just below the red dirt up towards the north regions of Mars. That's fuel that's water. A spaceship became unexpectedly available for the launch window to go to Mars to verify what satellite imaging had said was there with radar. The team of students at the University of Arizona had modeled a lander in 3D in AutoCAD and they needed to get it to c&c immediately. It was not parametrically driven nor were any toolpaths already defined. However the 3D model was extracted and the toolpaths automatically created and they built it and it did dig up the dirt. If I were to go anywhere serious with all I have done over the years it would be Briscad. I have known the very best in the business, communicated with the people running and working at most of the woodworking softwares. The nod to Briscad by so many of them tells me that's where the talent in CAD coding has gone to. These people do outstanding work and have excellent character. For them to choose Briscad says quite a bit.

One thing is for sure. If you pick up a cad application with the decent API you can write whatever you need.

Another thing that is for sure is that if you can't do that then you're at the mercy of what's already been written.

It's all about the length the width in the thicknesses. This is necessary for orientating a source hard directional material correctly to a cutting device.

The 3D transformation matrix used in video games commonly these days because the math is so basic allows for the points to be tracked and plotted to a new place in 3D space. 6 to one half dozen to another.when you look at your computer screen and you see a 3D environment and you're moving through the environment they can either move the environment around you or show you the camera view walking through the environment. To correctly do one you must be able to do the other. It's indistinguishable to the end user. However that information can be correlated with orientation information for output to feature recognition and proper cut listing. From my perspective it's already all been solved. It's just there's no money in providing the solution to everyone because then you're done. At least that's what I think is going on.when you have enough years looking at all these problems he really start too see more.

Has/does the woodworking industry suffer from a scarcity of programming?

Was trained to use AUTOCAD, but looks like they license it now based on a subscription! Not quite what I'm looking for...
Anyways, did run a web search for an alternative solution not running on a subscription, or one that does not drain my wallet!

I need to design enclosures for circuit boards.

I'm inclined to license CMS IntelliCAD CAD software because it's .dwg based and it looks like to be pretty easy for me to make this switch. I'm still running the free trial.
Looks like they still sell perpetual seats and licenses are quite inexpensive.
Any thoughts or suggestions?

i am using autocad for cad related work.