Wondering if anyone else has run into this problem? About a year ago we did a kitchen with Gemini gem coat CV with a SW stain. As you can see in the pictures the finish cracked. This went into the lab and they determined that it was not from over catalyzing nor from being sprayed on too heavy. The lab also stated that they could not find any thing wrong with our application process nor could they determine why it happened. We were very careful to have the right temperature being we sprayed during the winter. Lucky enough only the doors, drawer fronts and one end panel cracked. The rep told me they have never seen anything like this before and stated that it was because we used the SW stain and the SW rep said that it would not have had any effect on the CV. The rep also stated that they had had no batch issues and if it was a problem with their finish they would know because they check each batch. I recently talked to a couple shops in my area and they told me they had the same thing happen to them. Repairs cost me around $5000 and don't want a repeat. Anyone have any ideas as to what happened. - See more at: http://www.woodweb.com/cgi-bin/forums/cabinetmaking.pl?read=785691#sthash.XRs14tE0
.dpuf 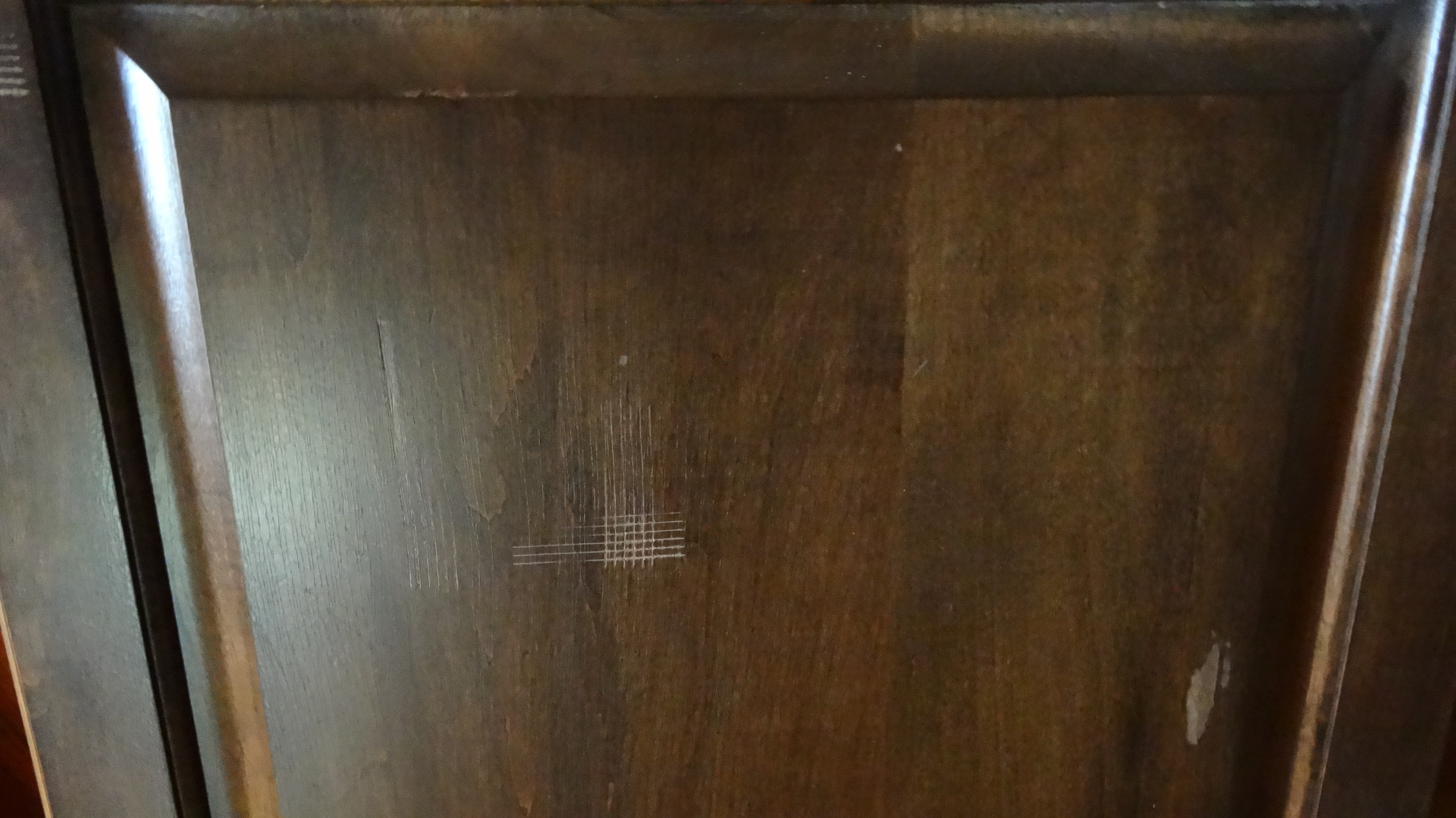 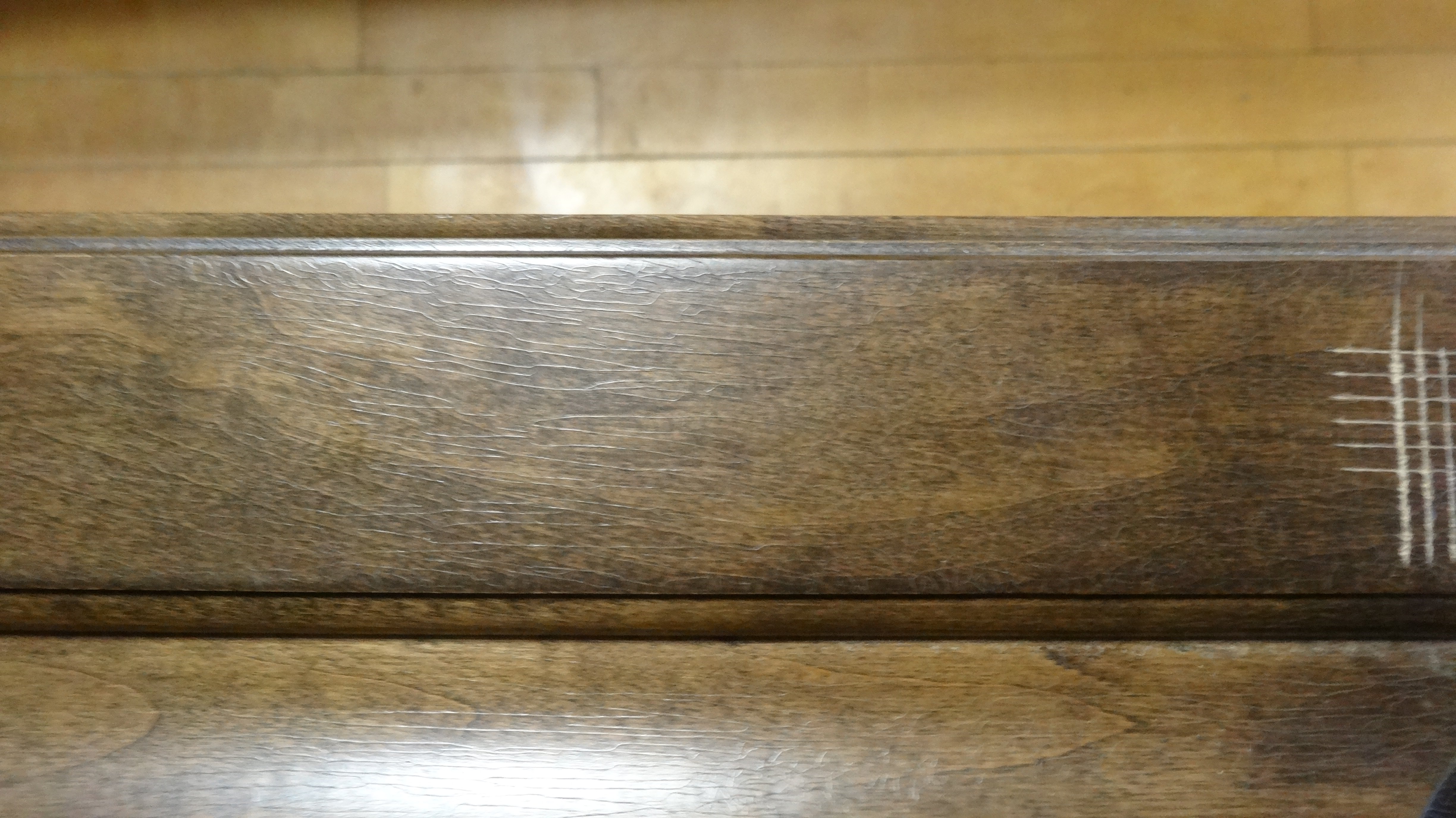 I've had that happen a couple of times. It was always when I tried to use it after the pot life expired. Luckily for me, it was just a single piece or two, when I didn't want to mix up a whole can so I tried to get away with using the little bit left that I knew was past pot life.

Who's lab did the test? You need to send it to an independent lab like AWI and have them check it. It appears to be a checking issue with the clear coats. Is this product KCMA tested? If so, it would have had a hot and cold check test done on it. If not, it may not withstand an extreme hot or cold environment and then it could crack when the wood expands and contracts.

NEVER... EVER.... TRUST THE MANUFACTURER! Years ago I was the Guardsman Coating Dist for NJ. Had all my customers using Super Chemveer having cracking issues on jobs that could be tracked based on when they finished the jobs. Your talking hundred of thousands of $$$$. They said it said from the bad cold winter and delivering the jobs in trucks lol. Let just say that I stood with my customers, had samples of the finish in question as well as catalytst from that time period and only mine and the PA customers got paid to replay the kitchens and cost associated with pulling those kitchens out. Other dist's believed the manufacturer and got nothing and lost their customers. They never said what was wrong but a couple years later at a ICA thing I was out with the chemists and a few drinks later found out it was caused by a new resin they tried that was about a nickel a pound cheaper.
Try to save some finish and cat if you can, call other users and check for problems and dates. Start a paper trail. If there are other guys call a meeting with your rep without telling him that other customers will be there. Sit him down and lay it out. They will either work with you or lawyer up. Either way you will see how good your rep is as well as the manufacturer.
BTW Gemini is NOT a tier 1 product.

Lee makes a good point. Operator error is a common cause of early finish failure. And it's possible the coating was formulated badly (or the solvents) but you will need a lab to put that in writing.

I'd be interested in talking with the finishers from the other shops that experienced the same problem and identify everything that you all had in common. It doesn't seem likely everyone is using the same cross-brands of stain and topcoats. The problems may or may not be related.

Cracking happens when the finish is adhered well but the internal stresses exceed its' cohesive strength. If the adhesion was bad, the finish would delaminate and peel, like the bare spot in the top picture. Which makes me wonder why someone did a number of cross-hatch adhesion tests on the door?

You've already ruled out a number of sources for the cracking, though I'd be inclined to get a second opinion from a well known and respected independent lab.

Here's a list of possible sources for the failure;


It's interesting that only the doors and drawer faces cracked. These are often sprayed horizontally and some finishers have a tendency to spray them more heavily since they don't have to worry about runs. CV has a reputation for cracking in the first year or two if it's applied too thick.

Rule out everything you can and see what's left. You probably won't be able to get a guaranteed cause for the failure, but can use the experience as a learning tool for the finishing crew.

I understand that application is often the issue. We used only the thinning agent recommended by the store. The one they said to use if you wanted the manufacturer to stand behind it. This was the first time we used a conversion varnish and were very careful, read up on it on this site a lot, and called the manufacturer four or five time to make sure that we were applying properly. We were very careful with room temperature and flash times. The mill thickness was tested and was good. We purchased this by the individual gallon and the store provided us with a pre measured catalyzer for each gallon. No gallon sat more than 24 hours before being used. The rep drove over and supplied five gallons of finish and spayed the new doors with me. The application was nearly identical but when thinning he was very liberal in thinning without measurement. This I understand because he has sprayed the product so many times there is probably no need for measurement. The rep told be about how many shops are spraying this product incorrectly and have zero issues. My feeling is that the wrong catalyzer was provided during that last purchase and that is why we did not have cracking on some surfaces. We were not told about the failure for 6mo plus so it is impossible to look at the containers because they have been disposed of.

Sounds like you need a supplier that is willing to spend some time with your finisher. Also I would also use one supplier for the entire system, this will eliminate the finger pointing.
Monty