Does ANYONE make a reliable 10-12" miter saw any more? I don't care if it weighs a small elephant, it never gets moved. We don't need a 14" $6500 Omga, but I don't mind spending more money on something in between.

Even the Festook Kapex gets lousy reviews because of burned out motors.

Years ago I worked at a shop that had a huge Omga 14" miter saw along with the Hoffman dovetail cutter. I remember the Omga being basically bulletproof, but rather oversized/overpowered for cutting the 3/4" to 3" wide frames they used it for. It was also really uncomfortable to use, the handle angle always hurt my wrist after about 5 cuts.

I've been the production manager at a different shop now for about 10 years, and I have yet to find an "off the shelf" miter saw from tool stores that lasts more than a couple years before you end up having to dismantle the damned thing to replace chintzy bearings or you eventually lose your religion trying to keep the saw square/true. We don't even use the saw for much more than square cuts anymore.

This is a saw that sits in the shop, is never moved, and basically makes 10-20 cuts per day, most of them being just normal square cuts.

We've blown 12" Dewalts and several 10" Makita and Bosch saws. The 12" Dewalt stands the chance at lasting the longest and is the one everyone prefers using, but I now have 2 of them that need bearing replacements (bearings scream like hell when you use them). I'm getting tired of having to put my most talented cabinet makers onto swapping out a bearing, only to find out that they've changed the design from what's shown in the various videos and nobody can figure out how to get the bearing off. And of course the local DeWalt repair facility no longer repairs DeWalt.

What's available? What do you recommend?

I'd recommend a vintage Dewalt radial arm saw. Nothing beats them for toughness!

For durability, safety, and ease of use, it's hard to beat a pneumatic upcut saw. I've had one in my shop for over 20 years and it's still going strong. A light tap on the foot pedal, and it cuts up to 13" wide x 3" thick. Of course, these saws only cut at 90 degrees. Ours is built into a bench along with a DeWalt 12" sliding miter saw. The upcut saw works all day, every day. The DeWalt maybe once or twice a week.

Another alternative would be a cut off saw like the CTD model pictured I saw in the machinery exchange for $1600.

I would definetly NOT get a radial arm saw. I used to have a monster DeWalt radial arm saw with an 18" blade that would cross cut 24". Yes, it was heavy duty and you were not going to wear it out or break it. I was willing to use it, but it was too scary to risk having employees use it. I eventually sold it to a shop in Mexico, hopefully those guys still have their arms attached... 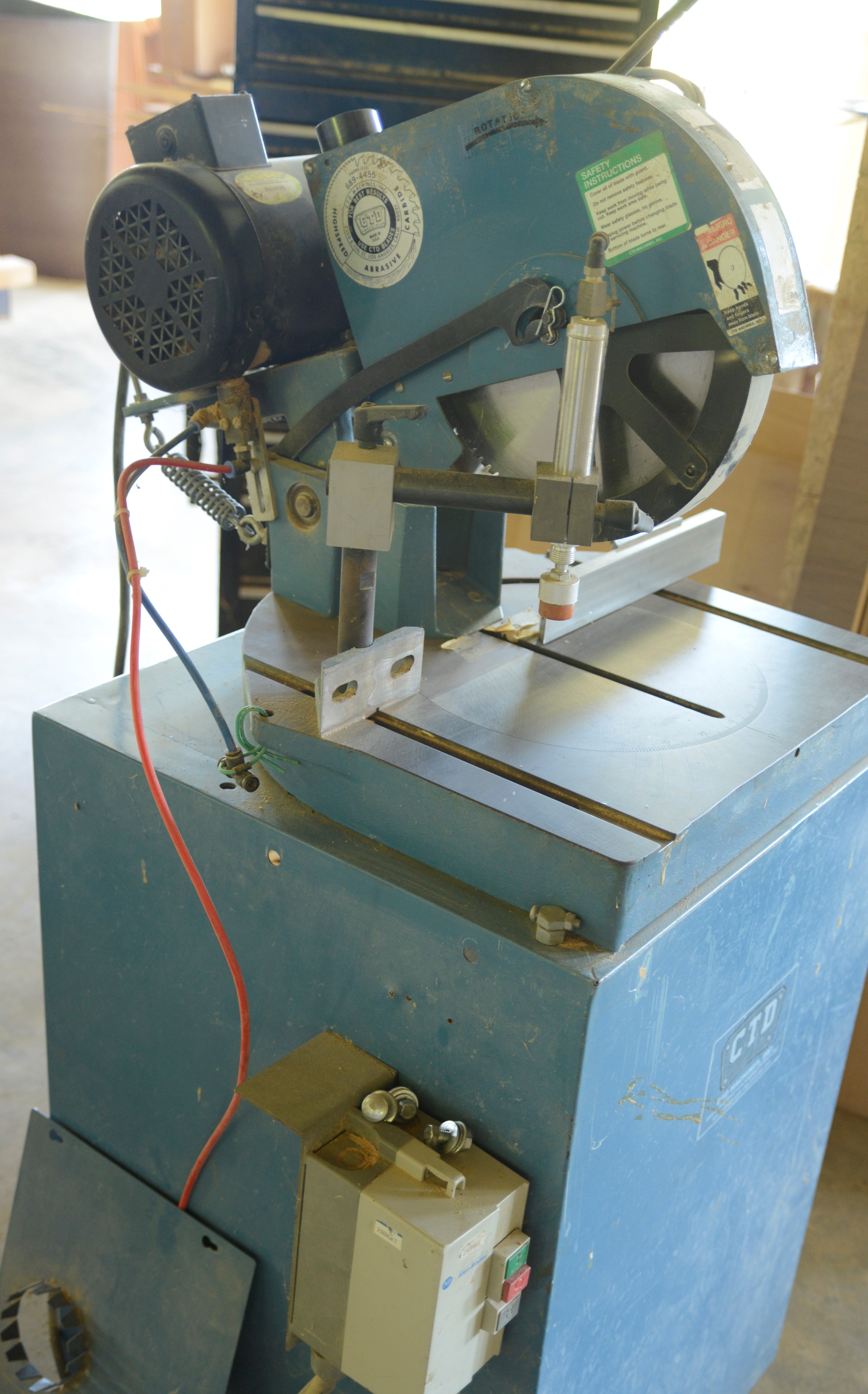 i would recommend a 12' omga. way stronger than a dewalt or makita

You're burning out a saw making 10-20 cuts per day? Sounds like something else is at work here. I have a 12" Hitachi chop saw, I am not recommending this saw it's a pc of crap. But I've had it for a decade and it's my rough cut saw. Motor still going strong as long as the laser.

I have a Bosch Axial Glide and out of the box it sucked. After I did a major tune up including cutting the detent part because you couldn't get both 45s to be true. Now it's a great saw. I keep it in the shop on a rolling cart and when I'm doing angles this is what I use.

For straight 90s I mostly use my sled on the tablesaw.

I have been using a 15” hitachi

15 years ago, I bought and returned, every miter saw, available, to include, porter cable, Hitachi, Bosh, Dewalt, Makita. I kept the Makita, its Still going strong. Most recently I have been wanting to set up 3 miter saws in a row so that I could preset left right and square cuts. So, once again, I am thinking about buying 3 new miter saws.

Omga all day. Cuts through anything. Accurate, stable, repairable. It also does not shoot cutoffs all over the shop.

We have a few the oldest is 15 or more years old. You need switches and return springs. Beyond that it is bulletproof and accurate.

Omga or CTD. Look for a used one. Buy once cry once.

I found two used Omga 350s for my old employer. They take a long time to get up to speed and the dust collection is sketchy but they are dead nuts accurate. The switch can be modified to toggle mode so it stays on for repetitive cuts.

Every other miter saw I have used had some deflection in the cut. The 12" DeWalt non-tilting model is probably about the best of the cheapies.

CTD. I bought a 12" saw 25 years ago, and it still cuts like on day one. User repairable, we had to replace the switch once. Use the CTD blades, they are the best.

Another vote for CTD
I bought a 12 inch used for practically nothing 20 years ago
Locked down at 90 degrees but will swing left or right
Flip on switch, run all day, goes thru anything like butter